NEET ordinance: What happens next? 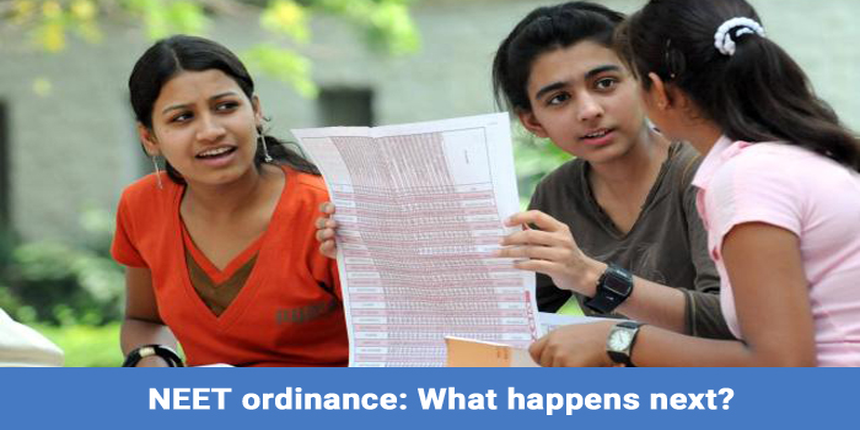 Even as the Union Cabinet on May 20, 2016 cleared an ordinance to keep state boards out of the ambit of uniform medical entrance exam, NEET, for the current academic year, it seems that the confusion around NEET is only escalating by the day. While a section of the aspirants are seeing the government’s special order as a welcome move, others have been left wondering about the future of NEET itself.

Q: Can NEET ordinance be challenged in the Supreme Court?

A: Yes, Supreme Court can nullify the NEET ordinance.

Q: How will the scores from two NEET exams be consolidated for one common Ranking?

A: The ranking methodology is yet to be announced by CBSE for a consolidated Ranking of NEET 1 and NEET 2 results. However, it has already been stated in the Supreme Court order that if a NEET-1 appeared candidate opts for NEET 2, his or her NEET 1 score would be invalidated.

A: There is no clarity on the contents of the ordinance. But if newspaper reports are to be believed, the test stands as scheduled on July 24, 2016. Despite the ordinance coming into effect, NEET would continue to be the entrance exam for private and deemed universities. So, to that extend NEET 2 might happen. NEET 2 along with already conducted NEET 1 will also be the basis for admissions to 15% All India Quota seats in government medical colleges.

Q: What will happen to the state level exams? (already conducted, cancelled and scheduled)?

A: Now this is a dicey scenario. If the ordinance holds, the state entrance exams would make a comeback.As the ordinance has been cleared by the Centre to exempt all state-level exams from NEET for this year, all the state exam conducting authorities, whose exams were earlier scrapped, will have to issue a notice regarding the new procedure or rescheduling of the exam date. And, those states whose entrance exam has been conducted will have to release the result and start the admission procedure with their new schedule.

Q: Will NEET score accepting institutions which had closed applications (AFMC, Jamia Hamdard, IMS,BHU etc), be opening their applications once again (as NEET 2 applicants may also claim candidature for the same)?

A: Yes, as Supreme Court has ruled that NEET 2 exam can be taken by all candidates, the institutions accepting NEET score for their admission will most likely re-open their application process, unless the ordinance provides them some other mechanism.

Q: What will happen to private medical entrance tests?

A: They still stand cancelled. The private medical colleges and deemed institutions will have to accept the NEET merit list for providing admissions to MBBS and BDS seats. The ordinance cleared by the Centre does not effect this as the Supreme Court had already rejected the plea of various private medical colleges for conducting their own entrance exam. A three judge bench headed by Justice AR Dave had said that, “There is no question of allowing any exam by private institutions.”

Q: Will Andhra Pradesh, Telangana and Jammu & Kashmir have to do away with 15 per cent quota seats through NEET for this year?

A: The states of Andhra Pradesh, Telangana and J&K have always been not part of the national pool of 15 per cent quota seats in government colleges. They would continue to do so. Thus, the states are most likely to conduct their own entrance tests for 100% MBBS and BDS seats.

Supreme Court had earlier ruled that NEET Phase 2 exam scheduled to be conducted on July 24, 2016 can be taken by all candidates irrespective of their appearance in AIPMT/NEET Phase 1 held on May 1, 2016. However, NEET phase 1 examinees who appear for NEET Phase 2 will lose their score of NEET 1.

Centre brings ordinance to postpone NEET for states by a year

Stay tuned to www.medicine.careers360.com for more news and information on NEET 2016