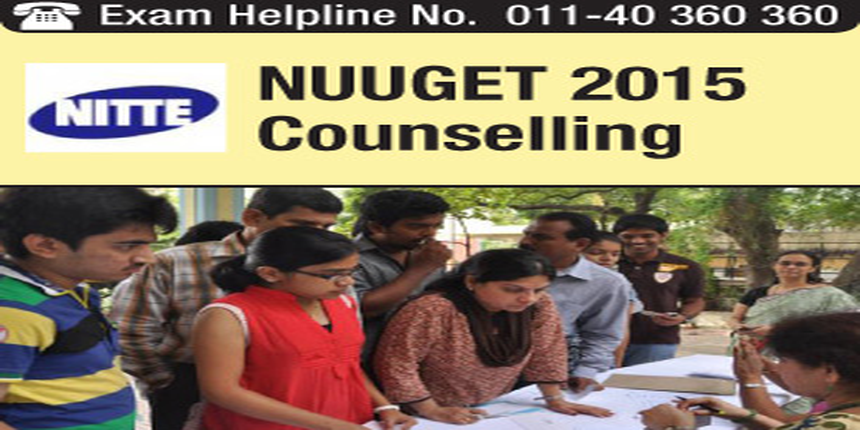 As all the MBBS seats were filled in the first counsellinmg round, the Second Counselling of NUUGET 2015 BDS admissions is scheduled to be held on July 10, 2015. All the eligible candidates with the Rank 1001 and onwards are required to be present at the same venue at 09:00 AM on July 10, 2015.

Candidates appearing for NUUGET 2015 BDS Second Counselling are required to bring the below listed original documents:

The MBBS and BDS classes for the session 2015 in NITEE university is scheduled to commence from August 1, 2015.

NUUGET 2015 Counselling was based on the merit list of the candidates who had qualified the entrance exam of NUUGET 2015. NUUGET 2015 entrance was conducted successfully on May 11, 2015 at various allotted centres.

The result and Merit list of NUUGET 2015 has been declared on June 13, 2015, announcing the names of the candidates who have to undergo the counselling procedure of NUUGET 2015.

The exam conducting authority, Nitte University has declared the result list which includes the candidate’s scores, name and merit position. Based on the NUUGET 2015 merit list and rank the allotment of MBBS and BDS seats in medical and dental college of consortium will be done.

Candidates can check below for the NUUGET 2015 Counselling schedule for MBBS and BDS Programme:

Candidates are required to bring the original and 3 set of photocopies of the below listed documents:

As per the official notification, NUUGET 2015 Counselling is being conducted to enroll as many 150 candidates in K S Hegde Medical Academy and 100 candidates in A B Shetty Memorial Institute of Dental sciences Deralakatte, Mangalore.

If a candidate after obtaining a seat wishes to withdrew on or before July 10, 2015 , the candidate will lose 10% of the fees paid. If the withdrawl is later, 25% of the paid fees will be forfeited.

Stay tuned to medicine.careers360.com for more information on NUUGET 2015 Counselling