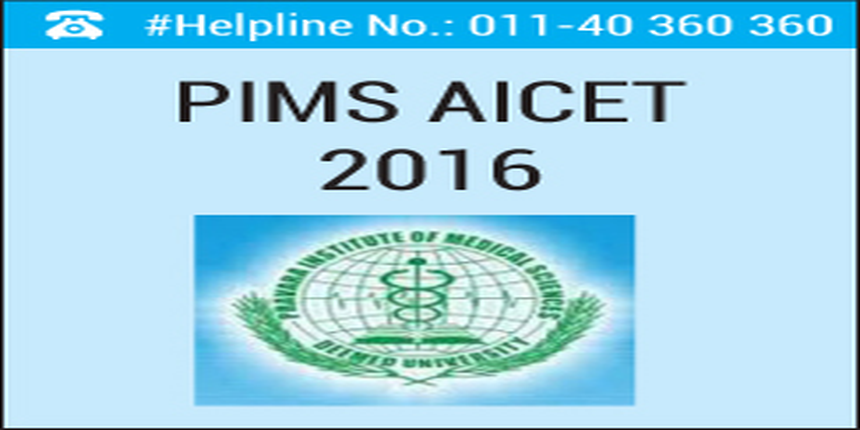 PIMS AICET 2016 has been replaced by NEET 2016 as per the Supreme Court order on May 9, 2016. Now, admission in all state-level and private medical colleges will be done on the basis of NEET 2016 results only. Therefore, MBBS/BDS aspirants are advised to ignore the information given below on this page. The relevant information regarding MBBS/BDS entrance exam and admission is available in articles related to NEET- Click Here.  Read important articles on NEET 2016 from the links given below:

The entrance examination was scheduled to be conducted on May 7, 2016 for providing admissions to 125 MBBS and 100 BDS seats in the university.

PIMS AICET 2016 Exam Pattern: The question paper will consist of 200 multiple choice questions (MCQs) from Physics, Chemistry, Botany and Zoology subjects. Each question will consist of one mark and no marks will be deducted for negative marking. Duration of the exam will be 3 hours.

PIMS AICET 2016 Important Dates: The academic schedule of PIMS AICET 2016 was announced by the exam conducating authority. Candidates can check below for the important dates and mark their calendars accordingly:

PIMS AICET 2016 Result: As the entrance exam was stand annulled, the result will not be declared. However, the admissions to medical and dental seats will be done according to the merit list of NEET 2016.

PIMS AICET 2016 Counselling: The counselling of PIMS AICET 2016 will be conducteed as per the merit list of NEET 2016, schduled to be held, tentatively in the month of August, 2016.

Stay tuned to www.medicine.careers360.com for more news and updations on PIMS AICET 2016