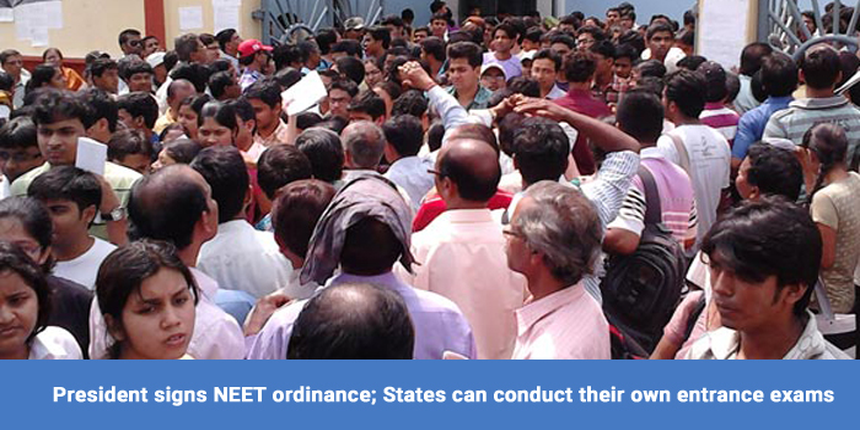 President Pranab Mukherjee has signed the NEET ordinance on May 24, 2016, paving the way for state-level medical entrance tests for admissions in MBBS and BDS programmes in government colleges. The ordinance which puts state-level medical entrance tests out of NEET ambit for current academic year was sent to the President after Union cabinet had cleared it on May 20.

The ordinance overrules the May 9 Supreme Court judgement which replaced all state-level and private medical entrance tests with NEET. With the ordinance coming into effect now, the states are allowed to conduct their own entrance tests for the current academic year. But, the private medical colleges and deemed institutions will still have to admit students through NEET only.

As per the Supreme Court guidelines, NEET Phase 1 has already been conducted on May 1. NEET phase 2 is scheduled to be conducted on July 24, 2016.

The NEET 2016 exam now will be applicable for admissions to all India 15 per cent quota seats in government colleges; and private and deemed institutions.

The ordinance on deferring NEET 2016 for admissions to state government colleges was submitted to the President on May 22. Before giving his nod on NEET 2016 ordinance, the President had sought clarity and legal advice on the matter. Read the full story here.

After the final NEET 2016 judgement on May 9 where the SC bench refused to allow any state-level or private medical test except NEET, many opposition parties had raised concerns over its feasibility for students who were preparing for their respective state-level exam based on their state syllabus. Many Parliament members had also said that language barrier in many states may put students from these states at disadvantage in a common test which is only in two languages – Hindi and English.

Stay tuned to medicine.careers360.com for more news and feature related to NEET 2016 Exam

Sir/Mam,I have passed my Higher Secondary Education in 2018 and now I am appearing for NEET Examination..please tell me the code what I have to keep.. and I am from Andra Pradesh. .

I cant solve many chemistry questions of neet mock tests . I feel so discouraged. What should i do in order to get better at solving?

neet paper contains 45 question.so there is  a possibility that you would be confident in  some field of chemistry.try to focus on those part first.if you can solve those question then automatically you will see that you would get answer for the difficult question.try to figure out your strength and weekness.because neet is all about different type of strategy that must be implemented during examination.

To be eligible to appear for NEET you need to complete your 10+2 with Biology/Biotechnology, Physics, chemistry and English from a recognised board or university.
And a candidate belonging to general category must have passed with atleast 50% in 10+2 for SC/ST it is 40% and for PwD category it is 45%.
There is no upper age limit but the minimum age must be 17.5 years.
Right now this is the Eligibility criteria for NEET. So you must study the following subjects in your 10+2 and prepare for NEET.
Read More
Answer
Answer Later
Report
14 Views