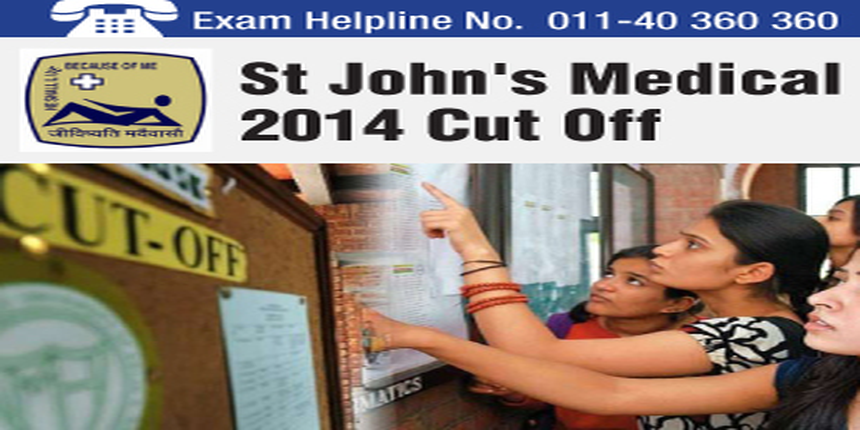 St. John's MBBS Entrance Exam 2014 Cutoff list will be tentatively available after the entrance exam is over on May 25, 2014. The Cutoff varies on various factors like number of seats, number of test takers, and difficulty level of the exam. Candidates will be able to download/view the cutoff list on the same page (links will be updated later) once it is released by the exam conducting authority St. John’s National Academy of Health Sciences.

St. John's MBBS Entrance Exam 2014 Cutoff score is the minimum score to be secured by candidates in the entrance exam. It is expected that after the release of cutoff list, “Interview List” in which nearly 120 candidates who qualified the written exam will be declared. Announcement of Interview List is scheduled to be done on June 20, 2014. The observation, psychological & other tests, and interviews, will be completed within 5 days. Test for physical fitness will be conducted by a Medical Board of the College. These tests will be decisive and final, regardless of any discrepancy between them and other certificates produced by candidates.

St. John's MBBS Entrance Exam 2014 is scheduled to be conducted on May 25, 2014 in paper-pencil format. The final merit list of St John’s MBBS entrance test 2014 will be announced on July 15, 2014. The final selection will be done on the basis of cumulative marks obtained by candidate in St John’s MBBS entrance exam and interview. Selected candidates will pursue Rajiv Gandhi University of Health Sciences, Bangalore affiliated MBBS course from St. John's Medical College and Hospital for the current academic year. Intake capacity of St. John's Medical College and Hospital is 60.

Want to know which medical and dental colleges you can get based on expected rank in AIPMT? Click here