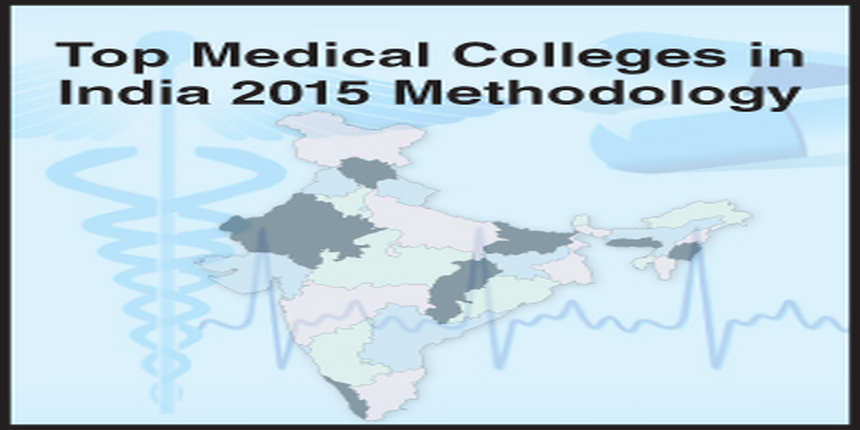 In all, there are around 400 medical institutes in India and nearly 900 pharma schools. The first stage of shortlisting 50% of the institutes was done on the basis of cut-offs in the state and national level entrance test outcomes. A comprehensive exercise was undertaken to evaluate different state and national entrance tests (like AIPMT, GPAT) and the own examination of prominent deemed and private universities (such as Manipal University MU-OET), that declare their cut-offs. Normalization was carried out for achieving uniformity. As a result, there were 200 institutes that were shortlisted for next stage of analysis for their publication record from Elsevier’s indexing database – ScopusÂ®.

The data on number of faculty, key departments, annual budget et al were taken from the Medical Council of India database and the Pharmacy Council of India database as well as the official websites of institutes. Publications were identified for a three year period from 2012-2014 and the corresponding citation impact and h-index figures were estimated. The data submitted by institutes and information garnered from authentic secondary sources like Annual Reports, RTI and mandatory disclosures et al were considered alongside the above quantitative data.

For ranking purpose, the publication records of institutes were searched using an in-built ‘affiliation search’ box. The institutes or universities which have departments other than medicine, their publication records were restricted to publications from medicine/pharmacy departments only. For intellectual property (patents) granted and patent applications (filed), the records were searched from Controller General Of Patents Design And Trademarks website. In quite a few cases it was observed that the R&D has been carried out in the university or research laboratories but the patent owners are the funding agencies. For granted patents, all the patents granted till date, was considered; while for applications, the search was restricted to the three-year period. The search strategy was such, so as to capture maximum number of records. It is important to note that the Indian Patent Office is not as quick in updating the records due to the long list of patents applications and as a result very few records are available for 2014. Employing a threshold criterion, we restricted to rank 100 outstanding medical schools in the country. Four key parameters were identified, namely student quality which included the cut-off scores; research output – comprising publication and IP count; learning that had quality of faculty and productivity; and finally impact factor consisting of citation analysis and h-index. The scores were arrived at using max-min formula for some parameters.

A cumulative rating was generated for all the institutes that occupy the same output pool using the above. We used the natural gaps that exist in any normal distribution to identify and delineate clusters. The robustness of data enabled us to discriminate amongst colleges in a rating category.