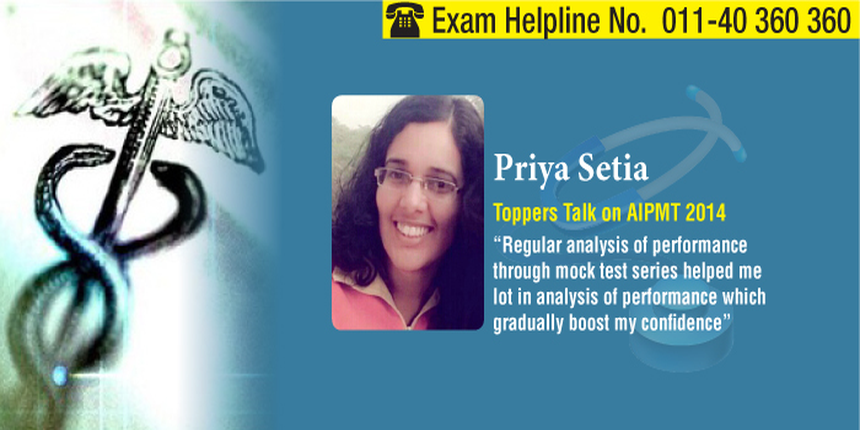 The D Day May 4, 2014 for the coveted exam, All India Pre Medical Test (AIPMT 2014) is approaching and aspirants who will appear in the exam must gear up their preparation now to get admissions in their desired top ranked MBBS Colleges.

"Get your personalized preparation report and improvement plan. Analyze your preparation level with AIPMT Prepmeter"

The topper says that Cracking Exams like AIPMT 2014 depends on effective strategy and efficient implementation of study plan.

Careers360: In which year did you qualify the Pre-Medical Test?

Priya Setia: I qualified NEET in 2013. It was my first attempt.

Careers360: What was your rank? Which colleges did you get?

Priya Setia: My NEET rank was 49 and I was getting all colleges under NEET 2013.

Careers360: Which college did you choose? What were the selection criteria?

Priya Setia:I always aspired to do my MBBS from a reputed government college. Fortunately on the basis of my All India Pre Medical Test Ranking, I got my dream college Maulana Azad Medical College (MAMC), the government medical college in Delhi affiliated to the University of Delhi. MAMC is one of India's well known medical colleges and ranked amongst the top 5 medical colleges in the country.

The selection criteria in MAMC were totally based on merit and online counseling was conducted for the admission.

Careers360: Which other exams did you take?

Careers360: What were your scores in 11th and 12th? Do think that candidates need to prepare separately for board exam and Pre-Medical Test?

I personally feel that there is no need of studying for boards separately because studying for NEET is covered in the board syllabus. The NEET syllabus is comprehensively designed on the NCERT pattern so both of these go hand in hand.

Careers360: What was your preparation strategy for Pre-Medical Test?

Priya Setia: I decided to take medical as my career during vacations after class 10 exam. My father who is also a doctor inspired me to pursue MBBS from good colleges of India. And from there my plan for doing MBBS begun. For doing MBBS from good medical institutes of India, I prepare the mindset first and then accordingly choke out the plan.

Then the journey of hard work began. I studied the material on regular basis. It is better to say routine study. I pay proper attention on test which helped me lot in improving myself. I advised students to take test on regular basis because it enhances your performance and gives you chance to analyze your preparation.

As far as preparation strategy is concerned, I feel NCERT should be thoroughly studied. For improving physics I used to solve a lot of numerical.

Careers360: What were your weak points and what were the stronger ones? How did you tackle your weakness?

Priya Setia: Thought of the exam brings the nervousness. Single exam is deciding your future and 2 years of hard work made me more nervous. I was afraid whether I would be able to manage time effectively and avoid silly mistakes during the exam. In short I wanted to give my 100% in entrance exam of NEET.

I feel Physics is my strength. I liked Physics and loved to solve numerical. This helped me in building my confidence towards the effort that I was putting.

Careers360: Do you think coaching is important for the AIPMT aspirants? If some aspirant can’t afford coaching, in what way he must prepare for the AIPMT Exam?

Priya Setia: Yes, I personally feel coaching helped me a lot. It made me sincere and regular. It also provided me a competitive environment which I would have never got at home.

For aspirants who can’t afford coaching, time management is something they usually lack. Setting up schedule, joining online test series can help them to tackle this problem. At the same time it will also provide them a competitive environment that ultimately helped them in boosting their performance and learning and the same helped me too.

Priya Setia: I would suggest Pre Medical Test aspirants should study NCERT thoroughly. They must study their course regularly on routine basis. I personally feel that solving more and more numerical helps in scoring marks in entrance exam. And at last but not least you must have faith in your potential because your confidence and attitude at the end matter the most.

AIPMT 2014 - Expert suggestions on what should be your preparation strategy

What is acctual subject for NEET

The NEET Exam is a pen paper based examination of 3 hours. The question paper comprises of questions from Physics, Chemistry and Biology (Zoology and Botany). The NEET syllabus is prepared on the basis of MCI notified common syllabus of the medical entrance exam. The examination serves as a gateway to the medical colleges of the country for medical aspirants.

Hope this helps you. We wish you the best for your future endeavours!

1 month is not enough for the strategic preparation for NEET. It will roughly take 4 -5 months to prepare strategically.

Here are some tips which will help you -

Always give priority to NCERT books, then prerefer any reference book