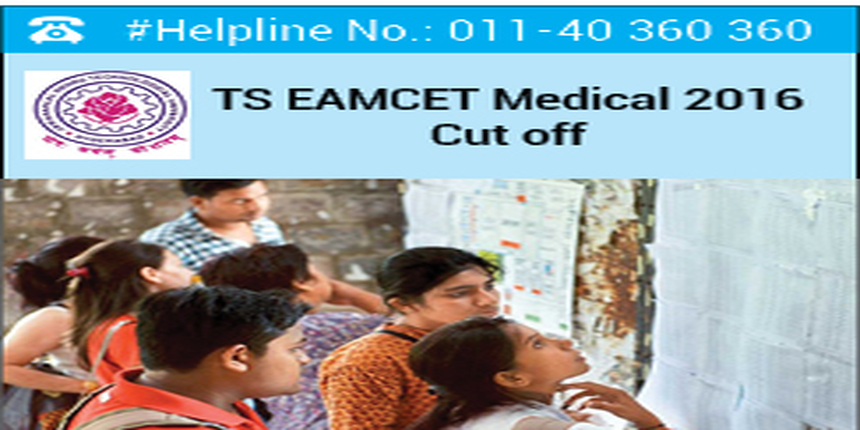 [Click Here to Enroll for Expert guidance for Medical admission Counselling and college selection or call at 011-40360360.]

The TS EAMCET Medical 2016 Cutoff score in terms of marks for reserved and unreserved category candidates is mentioned below:

The candidates who secured qualifying marks in TS EAMCET Medical 2016 and belonging to the Scheduled Caste and Schedule Tribe for whom qualifying marks have not been prescribed shall be assigned rank in order of merit based on combined score obtained by giving 75% weightage to the marks secured in TS EAMCET Medical 2016 and 25% weightage to the marks secured in the relevant group subjects namely Biology, Physics, Chemistry of the qualifying examination.

For the preparation of merit list, in case of inter se merit following procedure will be adopted to resolve ties:

The weightage of marks for candidates belonging to Persons of Indian Origin (PIO) / Overseas Citizen of India (OCI) Card holders will be decided by a committee constituted by the competent authority.

Declaration of Marks shall be downloaded by the candidates other than Board of Intermediate Education, Telangana / AP at the time of issue of TS EAMCET Medical 2016 admit card. The candidates are required to fill form and submit along with attested photo copies of the marks memos of the qualifying examination which includes Bridge Course Marks Memo (if any) on or before the last prescribed date. If any candidate’s fail to submit their rank will not be awarded.

TS EAMCET Medical 2016 will continue to be gateway for admission to state medical colleges in the admission year 2016. The exam, which earlier stood cancelled as per the Supreme Court order on May 9, 2016, again comes into effect after the Centre brought an ordinance on NEET, which put state entrance tests out of NEET ambit for 2016 admission year. However, NEET phase 2, applicable for admissions to 15 per cent all India quota in government colleges; and private and deemed institutions, is still open for all.