Is UGC mandated to make regulatory decisions on NEET?

Related Post -
NEET 2019
NEET Eligibility Criteria 2019
NEET Application Form 2019
NEET Admit Card 2019
However, a major question that the report by The Times of India (ToI) raises, is why has the UGC convened a meeting to discuss the modalities of NEET eligibility and why is it coming up with such a regulation? Regulatory decisions regarding medical higher education in India lies within the purview of the Medical Council of India and Dental Council of India. 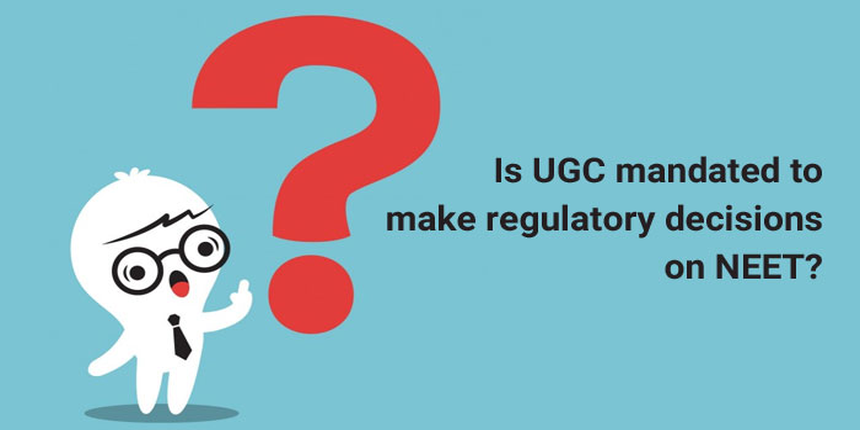 The ministry also approved the CBSE recommendation for unlimited attempts to take the test for both 15% all-India quota as well as 85% State quota in all government, private, central and deemed medical colleges and universities across the country. Here also, the final decision has to be taken by MCI/DCI.

The UGC’s apparent decision, as reported by ToI, hence, directly contradicts the Health Ministry stand. Such a statement, if it is true, will only create confusion among students.

Incidentally, the MCI, mandated to take regulatory decisions regarding medical education in India, has not released any official statement on this matter so far.

What makes matters worse for aspirants is the fact that the official NEET 2017 brochure has still not been published. Previously, the notification used to be out by December, but this year the application process has already been delayed by over 40 days, considering that in 2016 the application form was released on December 15. When contacted by Careers360 to understand the reason behind the delay, CBSE officials did not offer any specific reason, maintaining that the  ‘NEET notification will be released soon.’

Background: Age eligibility criteria as per official FAQs of NEET 2016

The minimum age for appearing for the test in 2016 was 17, while the maximum stood at 25 for 15 % all India Quota seats through NEET. For reserved category students, however, the age limit was relaxed by five additional years. An FAQ in last year’s NEET brochure, states two points:

“(i) A candidate who have completed the age of 17 years at the time of admission or will complete the age on or before 31st December of the year of his/her admission to the 1st year MBBS/BDS Course and is an INDIAN NATIONAL.

(ii) The upper age limit for candidates seeking admission under 15% All India Quota Seats is 25 years as on 31st December of the year of the entrance examination. Further provided that this upper age limit shall be relaxed by a period of 5 (five) years for the candidates of Scheduled Castes/ Scheduled Tribes/Other Backward Classes.”

To get detailed information on NEET application form 2017: Click Here

whats the score I have get in neet examination to get a seat in this college...?

CMC Vellore conducts admission to its 100 seats through Tamilnadu State Counselling. 74 seats are filled through Children of Associated churches. 10 seats are filled by the wards of CMC Staff. 1 seat is sponsored by the Indian Government and the rest 15 seats are Open Merit seats. And out of these 3 seats are reserved for SC/ST. Now you haven't mentioned the Category you fall under. All these seats are filled through NEET score on the basis of merit and preference. Irrespective of your Category, You will need more than 550. This is based on previous years cut offs. Now cut offs change every year. Cut offs change every year depending on various factors such as no.of Candidates appearing for the exam, no.of Candidates qualified, top NEET score and difficulty of the exam. So for a seat in this College you should fill their application form before. The MBBS application for MBBS for this year has been closed in March.

I got 92 percent in 10th ICSE , took 11th ISC computer group struggled , failed and made it to 12th , right now online classes are going on now I have idea to give IIT exam , can I make it ?Please do not boost me , just tell me the real fact so I can act according,When will be the 2021 IIT exams?

No it would be very hard for you to pass the jee main, as major course that comes in jee main is of 11th isc ,topic are same but in deep, I prefer you to go for either graduation like BA Bsc. throughothrough government college or go for engineering in private college and also apply for state college admissions examination like UPSEE if you are in Uttar Pradesh

Which are the courses other than mbbs that can be persued through NEET and which are the universities to be applied for that?

other than mbbs you can pursue bsc in botany , zoology , chemistry , biology , biotechnology  and B pharmacy , ICAR ( Agriculture exam) , b.tech in bioinformatics , biotechnology , bioengineering .For all these courses

Is cockroach earthworm and frog included in neet syllabus 2020?

No, frog and earthworm are not included in NEET syllabus of biology, in your NEET syllabus there is only brief account on the digestive, circulatory, respiratory, nervous and reproductive for cockroach only.

But it has been seen that many times questions in NEET have been asked from earthworm and frog, for example in NEET 2017 questions were asked from frog.

So it's better if you study , frog and earthworm as well for your neet 2020 examination.

if my aadhar card, voter ID card , driving license etc has my fathers name as X Kumar Y and 10th marksheet has X KR Y I have filled neet 2020 form same as 10th result as my fathers name X Kr Y and given Id proof of anyone of above will it create problem in exam center or in admit card

No but it create problem after sometime because fathers name is very important in any document.