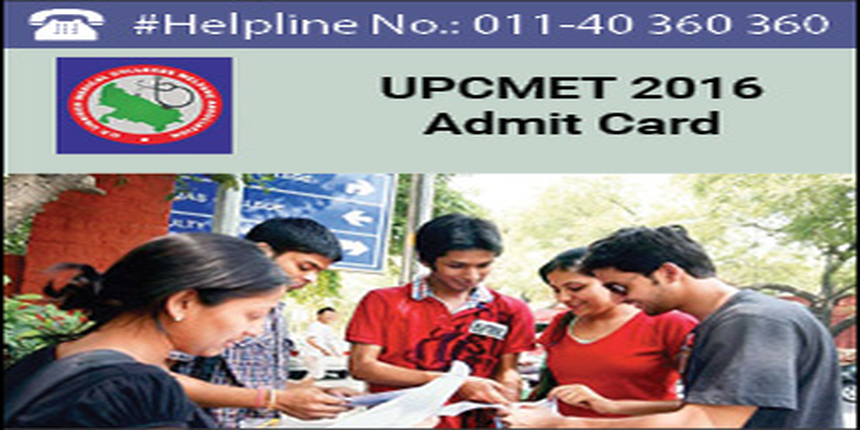 UPCMET UPCMET 2016 has been replaced by NEET 2016 as per the Supreme Court order on May 9, 2016. Now, admission in all state-level and private medical colleges will be done on the basis of NEET 2016 results only. Therefore, MBBS/BDS aspirants are advised to ignore the information given below on this page. The relevant information regarding MBBS/BDS entrance exam and admission is available in articles related to NEET- Click Here.  Read important articles on NEET 2016 from the links given below:

UPCMET 2016 Admit Card: The admit card will be available in the month of April, 2016 tentatively. The UPCMET 2016 admit card will be released only for those candidates whose application forms will be accepted by the exam conducting authority, Uttar Pradesh Unaided Medical Colleges Welfare Association. Candidates can download UPCMET admit card 2016 from the link given below from this page. This year, UPCMET 2016 will be conducted on May 14, 2016.

Check below for the procedure to download UPCMET 2016 Admit Card:

To get the duplicate UPCMET 2016 admit card, candidates must carry the following items:

To download UPCMET 2016 Admit Card: Click Here (The link will be activated as and when released by the exam conducting authority)

Note: No candidate will be allowed to appear in the entrance exam without a valid admit card of UPCMET 2016

UPCMET 2016 is a gateway examination scheduled to be conducted on May 14, 2016 for providing admissions to as many as 2000 MBBS seats in 18 member institutions of the exam conducting authority, Uttar Pradesh Unaided Medical Colleges Welfare Association