The Central Board of Investigation (CBI) has informed the Delhi High Court that it has filed a case to probe into the AIIMS 2017 paper leak allegations. Submitting the details before a two member bench comprising acting Chief Justice Gita Mittal and Justice C Hari Shankar, the CBI said that the case had been registered on June 13, two weeks after VYAPAM whistleblower Dr. Anand Rai first raised the allegations of a leak in the AIIMS MBBS exam held on May 28, 2017. The AIIMS MBBS 2017 results had been declared on June 15, just as the CBI began its investigations into the leak. Depending on the results of the investigations, a possibility remains that the AIIMS MBBS 2017 Entrance results could be cancelled, which will only add to stress of medical aspirants already bogged down by the various National Eligibility cum Entrance Test (NEET) 2017 controversies. 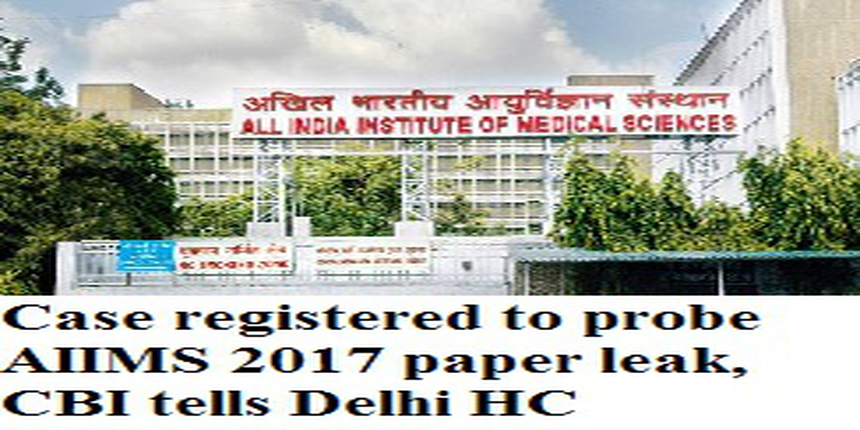 As per media reports, the CBI investigations have revealed that the leak has currently been traced to Ghaziabad, Uttar Pradesh (UP). Dr. Anand Rai had posted screenshots of the leaked paper on his social media pages to support his allegations, and according to the affidavit filed by the CBI Special Prosecutor, “specific questions in the leaked screenshots were used in SET-3 of shift-2 at exam centre - HR Institute of Technology, Morta, Ghaziabad, Uttar Pradesh (and it was found that) the specific combination and sequence of the questions was randomly and uniquely allocated to a particular candidate”. According to an AIIMS official, the candidate had already been identified and his results had been withheld, but the scale of the leak and the involvement of others had yet to be ascertained.

The central agency also informed the Court that while the investigations were still at a preliminary stage, searches had been conducted at the exam centre and at the houses of students and exam officials, leading to the examination of five witnesses and seizing of eight documents. The CBI had conducted its raids at seven locations across UP and Bihar. Interestingly, as reported by Careers360 in May, Dr. Rai had specifically mentioned that the leak had originated from MS Saxena College, Lucknow.

Appearing on behalf of Dr. Rai, Advocate Prashant Bhushan asked the Court to request to quash the declared AIIMS MBBS 2017 results if investigations revealed that the exam had been “entirely and irreversibly vitiated”. The Bench, which had first heard the case on July 26 before listing it for August 16, will next hear the matter on September 13.

Speaking to Careers360 in May, Dr. Rai had said,”It is difficult to ascertain how many people are involved and how many students have benefited from this leak. We also don’t know to how many centres it spread. What I can say for sure is that the questions were leaked from both sessions of the AIIMS paper held on May 28 at this particular centre in Lucknow. Even my informer has had to go underground for some time and at this point only an intelligence agency can unearth further details. This is why I have forwarded all the evidence in my possession to Dr. Guleria (the AIIMS Director) and asked him to push for a CBI inquiry into the same”.

Post these allegations, the All India Institute of Medical Sciences, New Delhi (AIIMS) had instituted a committee to look into the case, before recommending that it be investigated by the CBI.

Conducted by the All India Institute of Medical Sciences (AIIMS) New Delhi, AIIMS MBBS is a Computer Based Test offering medical aspirants admissions to 707 seats across seven AIIMS institutions in the country, namely those located at New Delhi, Bhopal, Patna, Jodhpur, Rishikesh, Raipur and Bhubaneshwar.