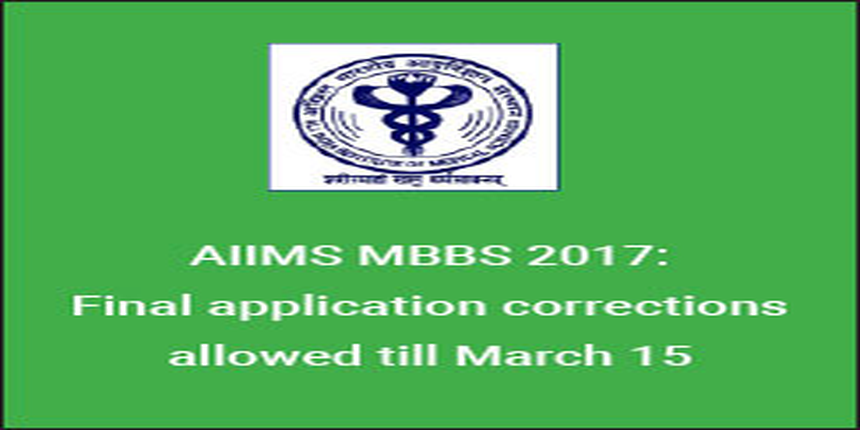 The All India Institute of Medical Sciences (AIIMS), New Delhi is providing a final opportunity for candidates to correct deficiencies in their AIIMS MBBS 2017 application forms. As per a notification released by AIIMS on March 6, 2017, candidates can make the final corrections to their AIIMS MBBS applications forms starting from 10 a.m. on March 8 until 5.00 p.m on March 15. This last chance to make corrections will only be open for those candidates who had already submitted their application fees and opted for their city choice in the form as prescribed in the AIIMS prospectus.

Candidates had earlier been given time until February 23, the last date for AIIMS MBBS application submissions, and then between March 1 to March 3 to correct the deficiencies in the images they had uploaded for their application forms. However, due to further deficiencies being found in various forms, including in terms of the submitted qualification details and opting of exam centres, the governing body decided to provide one last chance for candidates to complete and submit their application forms as per the proper requirements.

As per the AIIMS notification, “After thorough re-verification of Application Form of the candidates who have applied for AIIMS MBBS 2017 (â¦) still some deficiencies have been found viz. qualification details, uploaded images after having submitted the fee and opted the city of choice for examination...The competent authority has decided to give such applicants another chance to complete their Application Form (only those candidates who have submitted the fee and opted the city choice) as per AIIMS requirement...between 08.03.2017 (10.00 AM) to15.03.2017 (5.00 PM)”.

Candidates are required to correct their particulars and upload the correct files as per the guidelines prescribed by AIIMS within the given time. Candidates not doing so will not be issued Admit Cards nor be allowed to contact AIIMS regarding this matter in the future. “Admit Cards will only be issued to the candidates whose Application Form & Images will be found correct in all respect...Under whatsoever circumstances no further correspondence will be entertained in this regard in future.” the notification reads.

The final status of AIIMS MBBS 2017 applications can be checked by candidates on March 27 via the AIIMS website.

AIIMS MBBS 2017 is scheduled to be conducted on May 28, 2017, and will offer admissions to 707 MBBS seats across 7 AIIMS in the country. The Computer Based Test (CBT) AIIMS MBBS 2017 will be conducted in two shifts i.e. morning and forenoon session for 03 hours and 30 minutes duration. Around 1.5 lakh candidates had applied for AIIMS admissions last year.

Stay tuned to www.medicine.careers360.com for more information on AIIMS MBBS