AIIMS MBBS 2017: Result declared on June 15 after one day delay 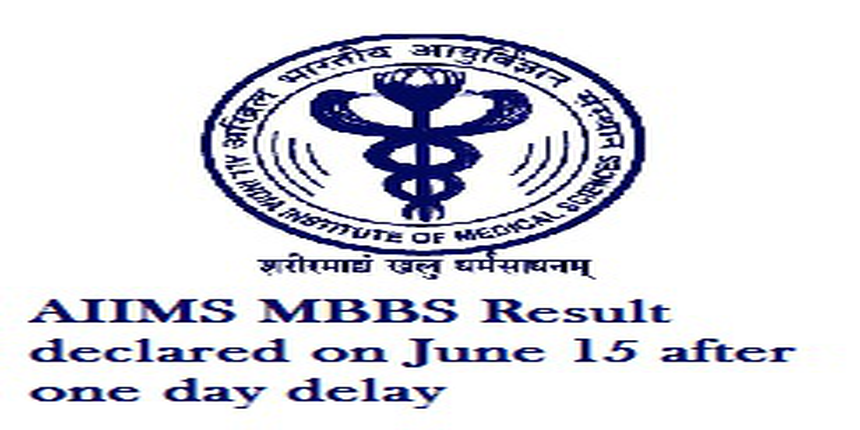 The AIIMS MBBS 2017 Result has been declared by the All India Institute of Medical Sciences, New Delhi on June 15, after a delay of one day from the previously scheduled date of June 14. The result of AIIMS MBBS, which was released in the early morning of June 15, has been published in online mode in the form of a merit list displaying the candidates’ roll numbers, All India ranks, categories, subject-wise and overall percentiles. The AIIMS MBBS 2017 Cut Off has also been declared along with the AIIMS MBBS Result.

Considered as one of India’s most competitive undergraduate medical entrance exams, AIIMS MBBS 2017 will offer candidates admissions to 707 MBBS and BDS seats across 7 AIIMS institutions located in New Delhi, Bhopal, Patna, Jodhpur, Rishikesh, Raipur and Bhubaneswar. 107 seats are in AIIMS Delhi and the other 6 AIIMS institutions will offer admissions to 100 seats each.

The result of AIIMS MBBS 2017 have been released in the form of a PDF file in two formats: Rank wise and Roll Number wise. Candidates can download both versions of the AIIMS MBBS Result 2017 from the link given below:

The top three roll numbers for each category and their secured category percentiles are in the tables below. Careers360 will be publishing the topper names and interviews shortly.

A popular theory doing the rounds regarding the delay was that AIIMS New Delhi was still in the middle of investigating a possible leak in AIIMS 2017 Question Paper on the day of the exam, an allegation first raised by VYAPAM whistle blower and education activist Dr. Anand Rai.

This was later dismissed by AIIMS authorities who informed the media that their investigations had revealed chances of cheating at certain centres in Uttar Pradesh but not of a paper leak and so there would be no delay in declaration of results. As per Dr. Rai however, the supposed probe committee had failed in contacting him for their investigations, forcing him to write to the Prime Minister and Ministry of Health and Family Welfare (MHFW) with the request that they investigate the case.

AIIMS does a NEET

The AIIMS authorities decided to take a leaf out of the CBSE’s book by not informing candidates about the result delay through their official channels, prolonging their frustration and testing their patience in the process. Despite having issued claims that the result would be issued on time, leading most candidates to stay glued to the official website until well after midnight, the AIIMS 2017 MBBS Result was finally declared only in the early hours of June 15.

The AIIMS MBBS 2017 entrance exam was conducted in a morning session and a forenoon session by AIIMS New Delhi on May 28. Held as a Computer Based Test (CBT) over a duration of 3 hours and 30 minutes in each session, the exam comprised of 200 reason and assertion based questions from Physics, Chemistry, Biology and General Knowledge. The total marks was 200 with candidates being awarded one mark for every right answer and deducted 1/3 marks for every incorrect one.