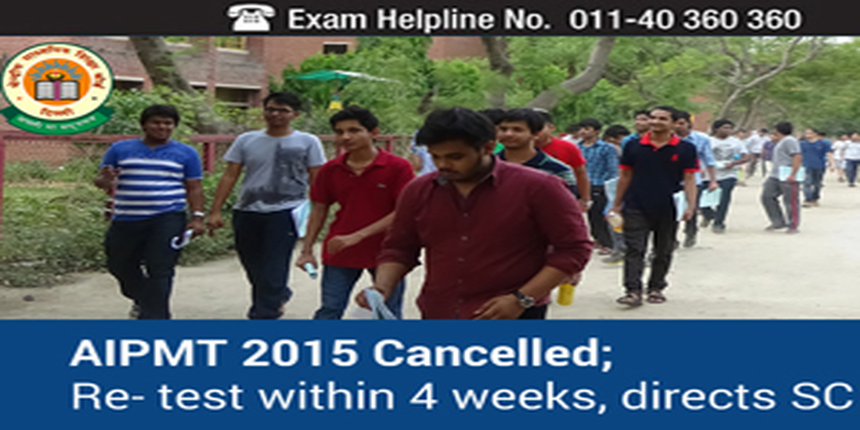 The Supreme Court on Monday, 15 June cancelled AIPMT 2015 exam considering the likely adverse impact on the exam and evaluation process due to 'answer key leak' during exam. The Apex Court has annulled the All India Pre- Medical Entrance Exam after taking into account the petitions filed by parents as well as students demanding re-examination of the coveted medical entrance examination of India.  The court also directed the exam authority, CBSE to conduct a re-test within four weeks.

In a hearing on June 12, SC had kept its order reserved for today. CBSE had earlier pleaded before Supreme Court not to cancel AIPMT 2015 as it would affect the entire academic schedule for 2015 – 16. In fact, the exam authority had sought permission from the Court to issue the merit list of candidates.

“Even after the declaration of AIPMT 2015 result, the police authorities can continue with the investigation process and the culprits, who are identified to have used unfair means, can be identified by the board and actions can be taken according to the rules,” CBSE had stated in its affidavit.

AIPMT 2015 landed in controversy after the Haryana Police had busted a racket involving leak of AIPMT 2015 Answer Keys on May 3, 2015. The police has arrested four people who had allegedly passed on AIPMT 2015 answer keys to students using vests with SIM card units and Bluetooth enabled earpieces during the All India Pre Medical Test (AIPMT).

On June 3, the Supreme Court had restrained the Central Board of Secondary Education (CBSE) from declaring the results for AIPMT 2015 till June 10. The examination authority CBSE had earlier scheduled June 5 as AIPMT 2015 result announcement date.

With reference to the probe on the AIPMT 2015 Answer key leak case, the Court had given Haryana Police one week to find the perpetrators of the alleged AIPMT 2015 answer key leak.

On May 26, the bench led by Justice A K Sikri had directed the Police to expedite its probe and identify the beneficiaries of the answer key leak.

AIPMT 2015: SC directs CBSE to hold back result till June 10