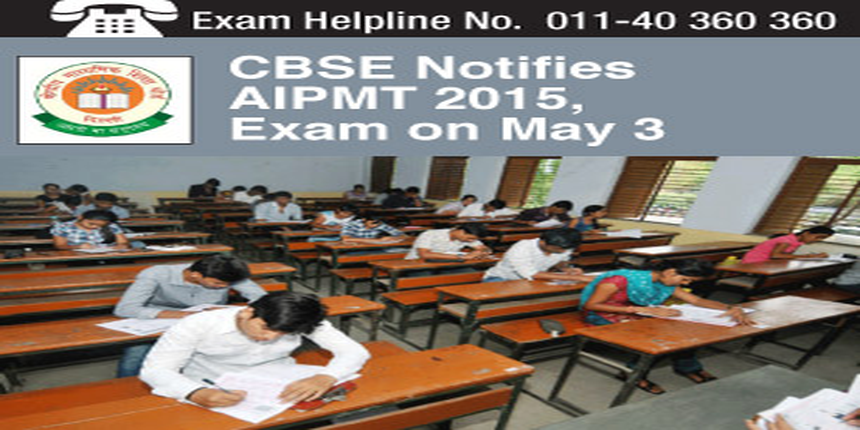 National-level medical entrance exam AIPMT 2015 will be conducted by Central Board of Secondary Education (CBSE) on May 3, 2015. AIPMT 2015 Applications begin from December 1, 2014. Eligibile candidates can apply for AIPMT 2015 through online applications.

The exam conducting body CBSE announced that AIPMT 2015 will follow the pattern of 2014 in terms of eligibility criteria and exam pattern.

“The CBSE will conduct the AIPMT 2015 for 15% merit of All India Quota seats in Government Medical/Dental Colleges all over India except the States of Andhra Pradesh and Jammu and Kashmir for the academic session 2015-16 on the 3rd May, 2015 (Sunday) in selected cities across the country and abroad,” an announcement by CBSE Exam Controller read.

“The eligibility conditions, syllabus, pattern, etc. will remain similar to AIPMT 2014 as notified by the Medical Council of India,” it added.

Talk to our expert counsellors for any doubts and queries related to the exam pattern, and preparation on AIPMT 2015 Exam Helpline at 011-40360360

AIPMT score is also accepted by 10 medical colleges and 4 medical institutions like BHU, AFMC and Delhi University and Hamdard University for admission to the respective medical and dental seats.

Under AIPMT 2014 all India quota, Counselling was held for over 3100 MBBS and 300 BDS seats across different medical and dental colleges in the country.

As per AIPMT 2014 eligibility criteria, candidates were required to attain a minimum age of 17 years as on December 31, 2015 and have secured qualifying marks in 10+2/HSC.

Going by AIPMT 2014 pattern, the application procedure for AIPMT 2015 is expected to be announced in first week of December 2014. The syllabus for AIPMT 2015 is prescribed by examination authority Central Board of Secondary Education (CBSE) on the recommendation of Medical Council of India (MCI). In AIPMT 2014, the exam booklet carried a total of 180 questions of 720 marks from Physics, Chemistry Zoology and Botany subjects.

According to the Medical Counselling Committee (MCC), which allots All India Quota medical seats across government colleges in the country, a total 858 out of 3,084 seats have been returned to respective the states after AIPMT 2014 Counselling Round 3 . Out of the 858 seats, 682 are from MBBS and 176 from BDS.