The Centre is planning to approach the Supreme Court to convince it for deferring implementation of National Eligibility-cum-Entrance Test (NEET) 2016 by a year after many lawmakers strongly urged for an ordinance to overrule the SC judgment replacing all state-level and private medical entrance exam with a single exam -NEET.

After the NEET 2016 judgement on May 9 where the SC bench refused to allow any state-level or private medical test except NEET, may opposition parties have raised concern over its feasibility for students who prepared for their respective state-level exam  based on their state syllabus. Many members of Parliament also said that language barrier in many states may put students from these states at disadvantage in a central test which is only in two languages – Hindi and English. 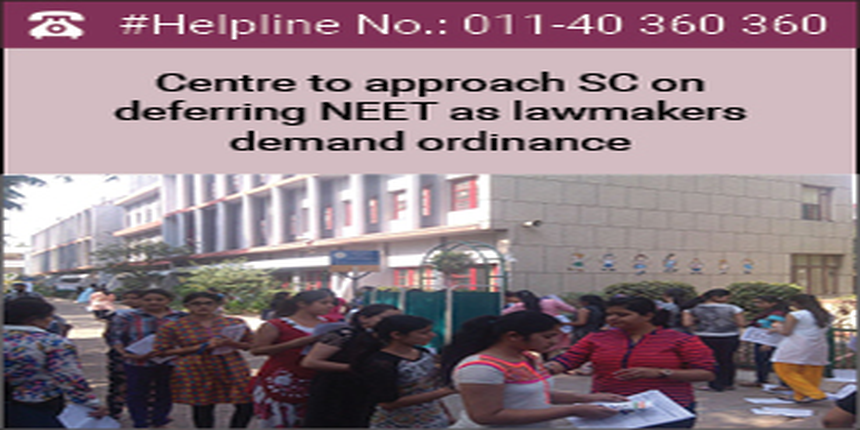 MPs from many opposition parties including Congress, Trinamool Congress, DMK, AIADMK urged the government to urgently address the issue and pass an ordinance to overrule the SC decision on NEET.

The government, however, said that it agrees with single national level admission test for MBBS and BDS programmes, but assured the parliament that it would try to convince Supreme Court to defer this idea by a year so that both students and institutions can get more time to prepare themselves accordingly.

M Venkaiah Naidu, Parliamentary Affairs Minister, made the announcement in Lok Sabha on May 11, 2016 that the government agrees with the idea of NEET, but it will approach Supreme Court for its implementation from next academic year.  “We are for a common entrance examination, but not from this year. Give time, let the students prepare adequately and then go for the examination. This is the stand of the central government. We will try to convince the Supreme Court,” Naidu said during zero hour in Lok Sabha.

Earlier, Congress leader Mallikarjun Kharge strongly criticised government over NEET 2016 and asked to postpone the common medical entrance exam by a year. “Defer the exam this year. By next year, all students will know that we have to take the common entrance test,” he said during discussion on the issue in Lok Sabha.

Many MPs also opined that students from state board study their courses in regional languages across and the national level exam NEET in English or Hindi, will be an injustice to them.

Sharing the concern of members, government assured the house that it would try to convince the SC to give a year time for NEET 2016 implementation so that students get time for preparation as per the NEET syllabus.

Earlier, on May 10, 2016 the Supreme Court had refused centre appeal regarding reconsideration of NEET 2016 even as many state governments had raised their concern and argued on the difficulties which students may face on NEET implementation for admissions in current academic year.

which are the best guide for chemistry preparation for neet?

List of top books for chemistry for Neet examination are listed below :-

* NCERT Chemistry textbooks for Class XI and XII :- Ncert chemistry is really good for Neet,go through all the solved examples, intext questions and exercise questions

*MS Chauhan (Organic) :- It is a great book to clear all your concepts regarding reactions in organic,there mechanism etc

Now ,
more than books what matters is how you read them so follow the below tips for reading chemistry :-

But , in this atmosphere of pandemic we have the best online course for Neet preparation


You will get following benefits in NEET knockout program:-


All the best for your neet preparation.

Yes new dates are out

Due to corona virus outbreak HRD Minister Ramesh Pokhriyal on 3rd july announced  the decision to postpone NEET examination considering the safety of students and released new schedule for the same.

Now your neet examination will be conducted on 13th September 2020 .

So, now you can prepare for your neet 2020 examination even in a more better way utilising the extra time you have got.

Coming to admit card , your NEET  admit card is generally  released 15 days before your NEET exam , so National Testing Agency  may release your NEET admit card  at  ntaneet.nic.in tentatively on 29th August .

if i get 400+ in neet which private college pr government college i m likely to get in m.p state ( state quota ) or all india quota

You haven't mentioned the Category you belong to. This is important because cut offs depend on this factor. Nevertheless, in India we have Government Medical Colleges, Private Medical Colleges and Deemed/Central Universities. Private Medical Colleges do not participate in All India Counselling and the seats are filled through State Counselling alone. And for appearing for State Counselling you need to hold the domicile of that particular State. Or else the only other option is through Management Quota. Under All India Quota, All the 15% of All India Quota Seats except for Jammu and Kashmir, 100% Seats at Deemed and Central Universities, IP Quota seats in ESIC Colleges, Seats at AFMC, AIIMS and JIPMER are filled by DGHS. With 400 it is difficult for a seat in All India Counselling.  The 85% State Quota and Private Colleges are filled by the respective State Authorities. And there are 3 Categories in Private Medical Colleges. Category A is the Government Quota Seats. And only candidates of the home State are eligible to apply for these seats. In 2019, the cut off for MP under State Quota for various Categories has been as follows:

So with 400 your chances for a seat in a GMC are difficult unless you belong to ST Category. B Category seats are also called Management Quota Seats and they are filled through State Counselling and the remaining seats are filled through direct Admissions by contacting the College directly provided the Candidate has registered for the respective State Counselling and has not been able to secure a seat in the Counselling. This is where you might have a chance. Here the fees is usually nothing less than 40 lakhs. The last Category is NRI seats Category and you cannot apply for that. Overall, if you belong to Reserved Categories, you will need atleast 450 and it should be atleast 575 if you belong to General Category. To help you with your NEET preparation, we have NEET Knockout packages that you can check at: https://learn.careers360.com/knockout-neet-may/. To help you during admission and counselling, we have https://www.careers360.com/mbbs-companion.

*Give priority to ncert:-To prepare for neet exam first of all go through ncert to clear your basic concepts and around 90 % questions in neet are based on ncert , also focus on diagrams while going through NCERT Biology and go through all the solved and unsolved questions of NCERT in Physics and Chemistry.

Thebest bookswhich you can go for covering and mastering neet examination syllabus are listed belowSubjectwise :-


*After finishing each chapter you should practice numericals and mcqs and keep revising your concepts at regular intervals, like once in a week or 15 days . You can make short notes for quick revision of important concepts and formulas

*Make routine or timetable :- you can make a routine as well and try to give at least 8 hours or more to study , your routine should revolve around things i.e study, revise and practice

*once you are done with the complete neet syllabus go through mock test papers .