The government of India will be adding about 10,000 medical seats across existing medical colleges by upgrading their infrastructure in the next one year. Union Minister of State and Family Welfare, Faggan Singh Kulaste, has said that the increased capacity of the medical colleges will reflect in addition of 10,000 seats in 2017, through NEET.

Related Post -
NEET 2019
NEET Eligibility Criteria 2019
NEET Application Form 2019
NEET Admit Card 2019
With the increased seats, the number of total undergraduate medical seats for the academic session 2017-18 may go up to 67,000.  The Union Minister also said that around 58 medical colleges across the country have been identified and it will be upgraded within the said time frame. The Minister was addressing a healthcare summit in Rajasthan on September 24, 2016. 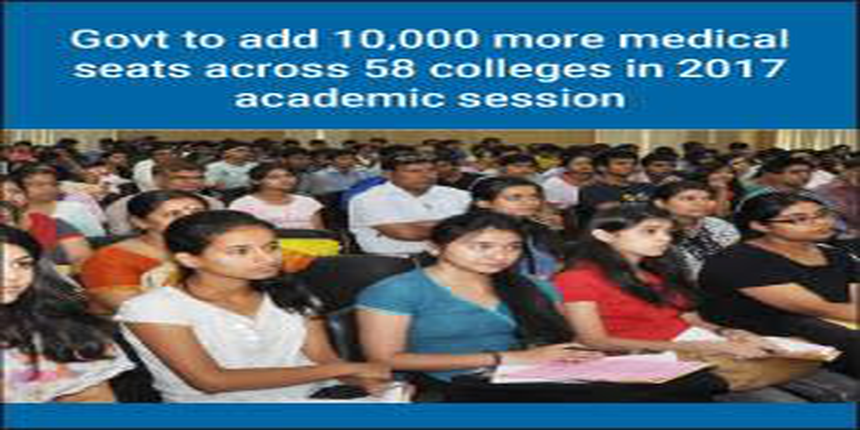 Currently, all state government colleges contribute their 15% seats for All India reserve Quota. The admission counselling for 15% All India Quota seats is conducted by Medical Counselling Committee, whereas, that for state quota seats are done by Directorate of Medical Education (DMER) of respective states. Further, by an SC order, DMER in respective states are also responsible for conducting counselling for private and deemed medical institutions.

Check below for the highlights of NEET 2016:

23 hours ago
Read More
View All News and Articles

No. Let's say you make changes in your NEET application form, now once you click on Final Submit, you will get a confirmation page. That is the proof that your request for corrections have been accepted and the changes have been made because that is the reason a correction window is made available in the first place. They will reflect on your application. Now these changes will reflect on your Admit card as well depending on the details that you have made changes to. But let's say for some reason the changes do not reflect on your admit card once you receive it, you need to immediately reach out to the helpdesk. And NTA will make a note of these changes that did not reflect and shall intimate you that these will show up on your NEET application form and then the counselling registration should you qualify in NEET. And you will be still allowed to appear for the exam. NTA will look into that. But truth be told, you making changes and they not reflecting on the application form are very minima. So do not worry about it. And if you are preparing for NEET, you may as well try our NEET Knockout package: https://learn.careers360.com/knockout-neet-may/ .

The MHRD has come up with a new schedule for JEE Mains, JEE Advanced and NEET 2020. JEE Main examination will be held between 1st-6th Sept, JEE advanced exam will be held on 27th Sept & NEET examination will be held on 13th Sept. At this point in time. NTA has not spoken about NEET's correction windiw. But NTA has opened JEE Mains correction window and so it is likely that NEET's correction window also might open. So please watch out for updated information on the official website. But if you are enquirin about the corrections that you made the last time, if you have received the confirmation page after making the corrections, that itself means that the changes have been considered. So nothing to be worried about. And if you are preparing for NEET, you may as well try our NEET Knockout package: https://learn.careers360.com/knockout-neet-may/ . And because you have 2 more months to prepare for JEE Mains, you may as well use this opportunity.

should I attempt mock paper again and revise if I gave all my mock paper ?prep 4 neet 2020

Hope you are doing great!!!

Attempting the mock tests will improve your confidence and grip over the subjects as well as the exam.Now there is a lot of time for the exam.So its better to revise once again and practice mock tests.You can also practice previous year question papers.

does neet 2021 will be postponed

Till now there is no any official announcement regarding NEET 2021. As per the latest notification issued by National Testing Agency for NEET 2020 it is further postponed to September 13th.

It is little bit difficult to predict about NEET 2021 because till now there is no any confirmitt of NEET 2020 so you should keep watch on official website of NTA NEET and don't believe on rumors.

You can also refer to the link given below for latest updates on NEET exam :-