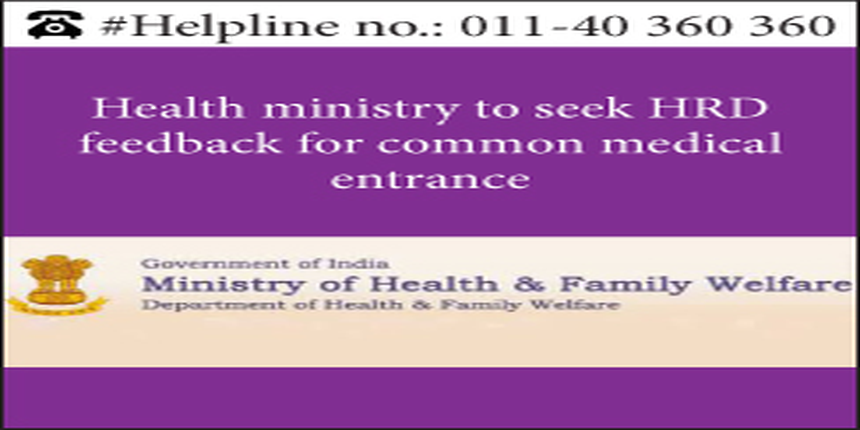 Ministry of Health and Family Welfare (MoHFW) which has been mulling over a proposal from Medical Council of India (MCI) for common medical entrance exam has decided to seek feedback from different ministries including HRD and Law on the viability of integrated an all India common entrance test for undergraduate and post postgraduate programmes.

The health ministry has prepared a draft on the common entrance test and will soon be circulating for consultation with other ministries including HRD and Law for feedback and suggestions for speedy implementation of the proposal, according to media reports. The proposal for common entrance exam was sent to Health Ministry by MCI on October 6, 2015.

Earlier, MCI had approved a joint proposal on CET and also demanded an amendment to the Medical Council of India (MCI) Act, 1956 to get right for deciding nature of the proposed common entrance test. Read the full story here.

The single common medical entrance test for both undergraduate and postgraduate medical courses in various colleges across the country, according to MCI, will not only save candidates from appearing in several exams but also ensure transparent admission process with admissions through All India merit list.

The demand for a common medical entrance test for students across the country was first initiated in 2009, when MCI was headed by Dr Ketan Desai. National Eligibility Test (NEET) a common medical entrance test was conducted in 2013 for admission to MBBS and BDS courses in government, private and deemed universities. However, it was scrapped the next year after the Supreme Court in June 2013 ruled out the MCI's notification for holding common entrance tests for MBBS, BDS and post-graduate medical courses.