JIPMER MBBS 2017 to be held on June 4; application available from Mar 27 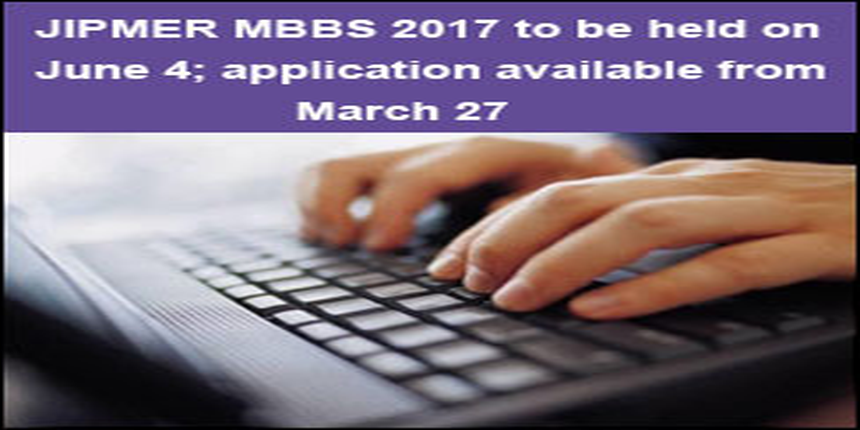 Jawaharlal Institute of Postgradute Medical Education & Research (JIPMER), Puducherry has announced the dates for JIPMER MBBS 2017. JIPMER MBBS 2017 will be conducted on June 4 in online mode. For admission year 2017, the entrance test will be conducted in two shifts – 10 am to 12.30 pm and 3 pm to 5.30 pm. Last year the exam was conducted in one shift only. The application form of JIPMER MBBS 2017 will be available from march 27, 2017 (11 am). Aspiring candidates can fill the application form till May 3, 2017 (5 pm), which is the last date for applying.

According to JIPMER, Puducherry officials, JIPMER MBBS 2017 Admit Card will be made available online for downloading for registered applicants from May 22, 2017 (10 am) onwards. The last date for admit card availability is June 4 (8 am). The exam conducting authority will release the merit list on June 19.

Aspiring candidates, who wish to apply for the medical entrance examination can apply now, however, they must be mindful of meeting the eligibility criteria of JIPMER MBBS 2017 before filling the application form.

In 2016, as many as 1,09,112 candidates had taken the entrance exam. According to a Supreme Court's directive in 2016 pertaining to NEET, JIPMER is allowed to conduct its own entrance exam.

For more updates on JIPMER 2017, keep tuned to medicine.careers360.com.