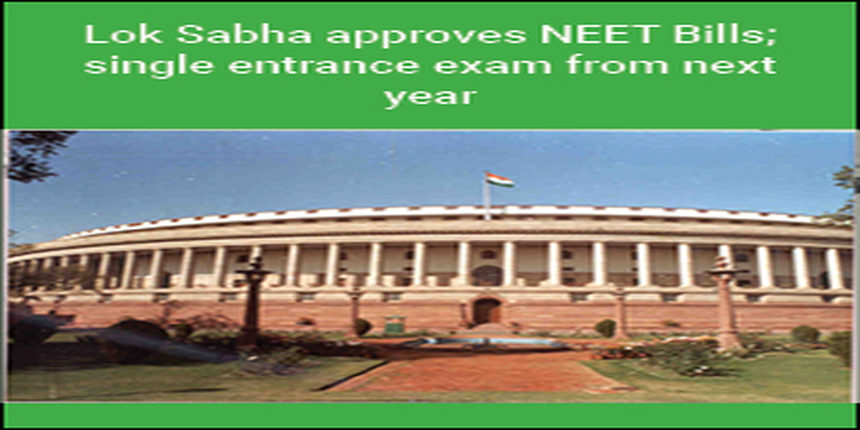 The Lok Sabha, on Tuesday, cleared major amendments in the Indian Medical Council Act, 1956 and the Dentists Act, 1948 paving the way for national level single entrance test - National Eligibility cum Entrance Test, for admission to different medical UG and PG programmes from the next academic year. The two new Acts -The Indian Medical Council (Amendment) Bill, 2016 and the Dentists (Amendment) Bill, 2016 - allow for the conduct of a single medical entrance test, NEET, for admission to all central, state government, private and deemed medical as well as dental colleges across the country. Replacing this year’s NEET ordinance, the amendments further validated entrance exams conducted by different states, as per the announced NEET ordinance, for the academic year 2016-17.

For the current academic session, 16 states have opted for State Board Examination and 15 states have opted for NEET. However, central, private and deemed universities will have to mandatorily accept NEET scores only for admitting candidates in their respective medical and dental colleges.

The two Bills, which saw broad support across the lower house, were introduced by Health Minister JP Nadda. As an ordinance has a life of three months, the NEET Ordinance had to be passed as a bill within 42 days (6 weeks) from the day a Parliament session commences to prevent it from lapsing.

“The bill will give statutory status to NEET. This will make the examination system transparent and students will not face multiplicity of medical examinations. It will also stop exploitation of students in the name of capitation fees,” the health minister said during the debate in Lok Sabha on July 19.

Under mounting pressure from several states, government had in May, 2016 promulgated two ordinances to keep state boards out of the ambit of uniform medical and dental entrance examination, National Eligibility-cum-Entrance Test (NEET), for this year. Read the full story here.

The ordinances had sought to "partially" overturn a Supreme Court verdict which ruled that all government colleges, deemed universities and private medical colleges would be covered under NEET. Read the full story here.

On July 14, responding to a petition seeking to overturn the NEET ordinance, the Supreme Court had said the validity of the Centre's ordinance allowing states to conduct separate entrance tests for admission to MBBS and BDS courses for the 2016-17 academic year was "in doubt", but had rejected a plea seeking a stay on it saying half the states have already conducted their tests. Read the full story here.

You need to correct your details during the correction period only.Changes or corrections cannot be done at later stage.So, you cannot change your date of birth at the time of counselling.Any request for change in details after the closing of correction window will not be accepted through any medium.Your candidature will get cancelled if the details are incorrect.

Criteria for Academic Qualification in NEET 2020

Students who have passed the class XII qualifying exam.

Students who are appearing for the class XII qualifying exam.

Candidates must have Physics, Chemistry, Biology/Biotechnology as their subjects in Class XII.

Class XII is the basic qualifying exam, but the qualifying marks differ according to the candidates’ category. The following persons are eligible to give the exam:

General/GEN-EWS    50% marks in the qualifying exam

Persons With Disabilities    45% marks in the qualifying exam