The Supreme Court will pronounce its much-awaited verdict on the NEET age limit controversy on Monday, February 27, 2017. A three division bench of the Court comprising Justices Dipak Misra, AM Khanwilkar and MM Shantanagoudar reserved their decision on the issue after hearing arguments by the Medical Council of India in support of the age limit on Thursday, February 23.
Related Post -
NEET 2019
NEET Eligibility Criteria 2019
NEET Application Form 2019
NEET Admit Card 2019 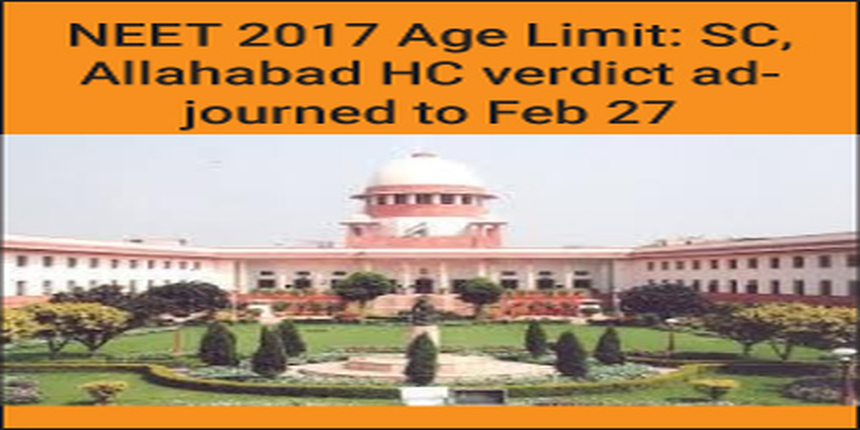 A petition was filed with the Supreme Court on February 10 challenging the sudden introduction of this new eligibility criteria with the demand that the government roll it back. The Court had heard the matter on February 17, and had issued a notice to the Union government and the Medical Council of India seeking their reply on the age criteria for NEET. Given that the last date for NEET applications is March 1, the Court had termed the matter urgent and requested for the Centre’s and MCI’s replies on February 23.

Adjournment by the Allahabad High Court

A similar petition had been filed in the Lucknow bench of the Allahabad High Court on February 16. The two division bench of Justice Amreshwar Pratap Sahi and Justice Sanjay Harkauli had also directed the MCI along with the Centre and the CBSE to clarify how the upper age limit for NEET 2017 had been determined. “The stand of the Medical Council of India as well as that of the Union government has to be brought on record by way of an affidavit as to what was the procedure adopted for the purpose of fixing the upper age limit of 25 years for NEET examination,” the Bench had stated, directing the counter-affidavits to be filed by February 20.

The MCI and the Union Government however were only able to file their affidavits by February 22. The affidavit stated that the decision to introduce the upper age limit had been passed by the Executive Committee of the Council via a resolution, and had also received approval from the Government of India, thus amounting to a proper exercise of power with regard to the introduction of this rule. The affidavit also put forward the argument that without an age limit, unfair means could be used by candidates from higher age groups to qualify in the exam. “Capping the upper age limit at 25 years gives a reasonable span of 8 years to a candidate to appear in NEET. The provision of absence of upper age limit is misused by unscrupulous elements, impersonators and candidates belonging to higher age groups (apparently doctors, teachers, coaching personal etc)...”, the affidavit stated. The MCI also compared the introduction of age limit in NEET as being in line with existing age limits in similar national level exams like the JEE (Advanced) for admission to IITs and the CLAT for National Law Schools.

Thoughts from the High Court

In an encouraging sign for the petitioners, the Bench had replied that the MCI affidavit still did not give a suitable answer as to why the Graduate Medical Education Regulations 1997 were not amended accordingly to introduce the age limit prescription. However, given that the Supreme Court was yet to hear the MCI’s arguments until February 23 and pass its verdict, the High Court also adjourned the matter till whenever the apex court’s decision would be received. “We adjourn the matter for Monday i.e. 27.02.2017, calling upon the Central Government as well as the Medical Council of India to show cause as to why the petitioners be also not permitted to fill up their applications ignoring the upper age limit of 25 years”, the Bench ordered.

MCI’s arguments in the Supreme Court

As per reports in the media, the MCI, in its response affidavit filed with the Court on Feb 23, argued that it was unfair to expect younger students attempting the NEET exam for the first time to compete with much older students who had been preparing for long and had the added advantage of having attempted NEET earlier. The failure of students to gain admission to medical colleges despite several attempts indicates that an upper age limit is needed so that these students stop wasting time and resources and don’t lose out on opportunities to pursue alternative professions, the MCI added.

The MCI went on to state that age is a major factor in determining a student’s capability to learn, and that the study of medicine requires “sharp young minds” to absorb the rigorous training imparted during the MBBS and BDS courses. “A young student studying the MBBS/BDS course will be able to grasp the teaching and training...with more ease and efficiency,” the MCI had said.

With the Supreme Court and the Allahabad High Court both adjourning their verdicts, February 27 promises to be a decisive day in the futures of NEET 2017 applicants across the country.