The Supreme Court will pronounce its final verdict on the NEET age limit controversy on Friday, March 31. More crucially, it has allowed the petitioners who had filed the case against the age limit along with other intervening applicants the opportunity to fill the NEET 2017 Application Form until then. All aspirants who were unable to approach the Court before the NEET applications last date will be allowed to apply if the Supreme Court strikes down the CBSE age limit notification when passing its verdict on March 31. "Let the matter be listed for final hearing on 31.03.2017. In the meantime, the writ petitioners and the intervenors in this Court shall be permitted to fill up the forms. The Central Board of Secondary Education...shall accept the forms of the writ petitioners and the intervenors in this Court," the two member Bench of Justices Dipak Misra and AM Khanwilkar said. With reference to those aspirants who couldn't approach the Court, the Bench clarified, "In case, we strike down the Administrative instructions, this Court may think of passing a mandatory order in respect of the candidates who would be eligible and desirous of undertaking the examination".

MCI U-Turn
The adjournment order comes after the Medical Council of India (MCI) performed a u-turn before the Court, arguing in favour of the age limit only three days after it had said it had decided to remove the rule for NEET 2017. Despite the Supreme Court mandated Oversight Committee on the MCI, headed by former Chief Justice RM Lodha, recommending the removal of the age limit rule, the MCI stuck to its guns in Court explicitly stating that it did not share the Committee’s opinion on the matter. Only on Thursday, March 16, MCI Vice-President Dr. CV Bhirmanandam had informed media persons that they had received the recommendations of the Oversight Committee and had decided to go with it. "The Oversight Committee felt such limitations will reduce the number of doctors in the country. The Union Health Ministry agreed and suggested the recommendations to us. We have passed it," Dr. Bhirmandandam had said. 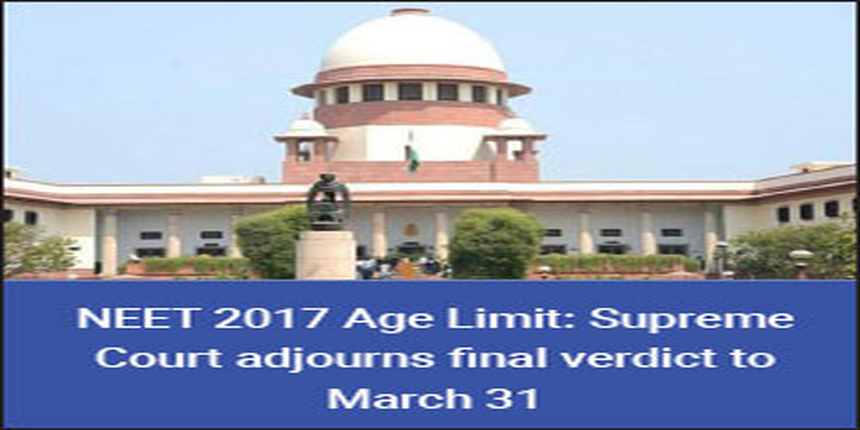 The Bench set March 31 as the date of verdict as the MCI is scheduled to hold its General Body Meeting on March 29. It is expected that the MCI will take its final stand on the age limit criteria in that meeting and inform the Court accordingly. A similar case is pending before the Lucknow Bench of the Allahabad High Court, which will issue its decision based on the Supreme Court verdict. The Supreme Court is also currently hearing another NEET 2017 related case, this one being on the inclusion of Urdu language, with the verdict expected to be given on March 26.

While the apex court has granted interim relief to the petitioners and might also consider granting final age-limit relief only to the petitioners and others who had approached it before the NEET applications last date of March 1, the counsel for the petitioners has already argued against this scenario, pointing out how it would be unfair on those aspirants who did not have the resources to approach the Court in time and why justice would only be served if the age limit criteria is removed for everyone. The only way this will now happen is if the original CBSE notification which introduced the new rules on January 31 is declared as illegal by the Court on March 31, thereby rendering those rules null and void for NEET 2017 and making all aspirants eligible irrespective of age.

Given the MCI’s constant flip-flops on the issue, coupled with the fact that the Court-appointed Lodha Committee has itself recommended the removal of the age limit, there still remains a strong chance that the Supreme Court will decide in favour of all over-age students in this long-winded legal battle, particularly as it has already granted petitioners permission to fill applications in the interim. Earlier on Friday, noted activist Dr. Anand Rai, part of the petitioning team, had told Careers360, “it is imperative for the Supreme Court to take into consideration the Committee’s recommendations for the hearing and this should mean that the verdict is passed in our favour”.

The Oversight Committee, which was formed by a five member Supreme Court Bench headed by Justice Anil R Dave in May 2016 to oversee the functioning of the MCI, had recommended after the previous hearing on February 27 that given the “dearth of doctors in the country”, the upper age limit criteria for admissions through NEET should be removed.

With the MCI remaining inconsistent on what has become a career-defining legal battle for lakhs of MBBS aspirants, it is now upto the Supreme Court to grant all NEET aspirants the justice they deserve by declaring the CBSE notification illegal and removing the age-limit criteria for NEET once and for all.