NEET 2017 to be counted as first attempt; CBSE effects change in application form

Soon after the clarification issued on NEET 2017 eligibility criteria by the Medical Council of India in response to a official letter from the Ministry of Health and Family Welfare, the Central Board of Secondary Education (CBSE) has issued a notification stating that NEET 2017 will be treated as the first attempt for all medical aspirants. More importantly, the candidates who could not fill the NEET 2017 application form earlier due to the previously introduced restriction of three attempts will be now able to do so. The CBSE has already made the requisite changes to the application form. 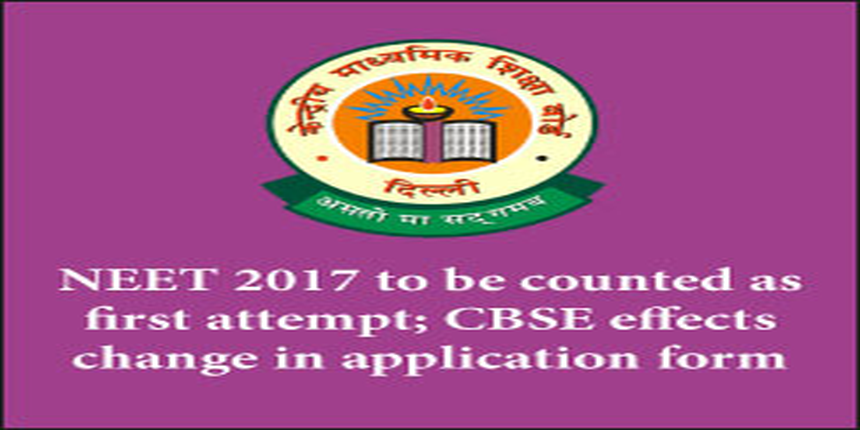 In a notification undersigned by the Joint Secretary & OSD (NEET) and available on the CBSE website, the organizing body has emphasized upon the withdrawal of NEET eligibility criteria regarding the number of attempts. “NEET 2017 will be counted as first attempt for all the candidates. Changes have been effected by CBSE accordingly in the application form,” declares the notice. It further states that, “All candidates who could not fill up the application form due to the condition of three attempts at AIPMT/NEET will now be able to fill up their application form,” reads the notification.

Earlier on February 3, 2017, the Medical Council of India (MCI) had scrapped the NEET 2017 criteria that limited the number of attempts for the national level exam. The MCI had clarified that the cap of three attempts on NEET would continue but 2017 would be counted as the first attempt for all candidates. This came as a response to controversy which had been generated by the introduction of new eligibility criteria for NEET 2017, which introduced an age cap of 25 for general candidates, and eliminated those candidates from the admission process who had already attempted NEET/AIPMT thrice in the past.

The Ministry of Health and Family Welfare had sought a clarification from the MCI regarding this rule, following which the MCI directed the CBSE to take the appropriate steps to revise the same, as made clear in the latest notification.