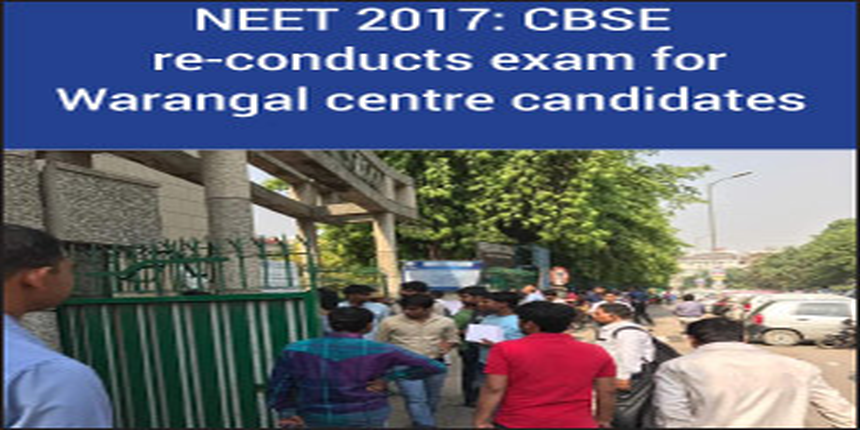 Compensating candidates from a centre in Warangal, Telangana who were made to write their NEET 2017 paper in Hindi and English despite opting for Telugu language, the Central Board of Secondary Education (CBSE) has organized a re-exam for them on Wednesday, May 17. As per media reports, 230 candidates were invited to appear for the NEET Re-test which was held at St. Peters Central Public School in Hanamkonda, Warangal. Out of the 230 candidates, 228 were to appear for the exam in their chosen language of Telugu while the remaining two would appear for the exam in Hindi, 10 days after they were denied the opportunity to appear for the exam in their language of choice. While the CBSE did not issue an official notification regarding the re-conduct of the exam for the Warangal candidates, it has been understood that the students and parents were informed about the schedule and venue directly.

All of these incidents have led student groups and activists across the country to demand for a re-test for NEET 2017, leading MHRD Minister Prakash Javadekar to assure them that the CBSE will be issuing a clarification regarding these issues soon. While the students demanding for the exam to be held again may feel encouraged by the fact that the CBSE agreed to re-conduct NEET for candidates at the Warangal centre following strong complaints and protests conducted by parents and their wards, it must be remembered that the Board realized it had no other option as it had its own incompetency to blame in not being able to supply candidates with the Telugu or Hindi papers as per their choice. Whether it takes a similarly self-critical view with regard to the other NEET controversies and accedes to the demands of candidates for re-conducting NEET 2017 for all remains to be seen.

For the latest news, views and information on NEET, visit medicine.careers360.com!