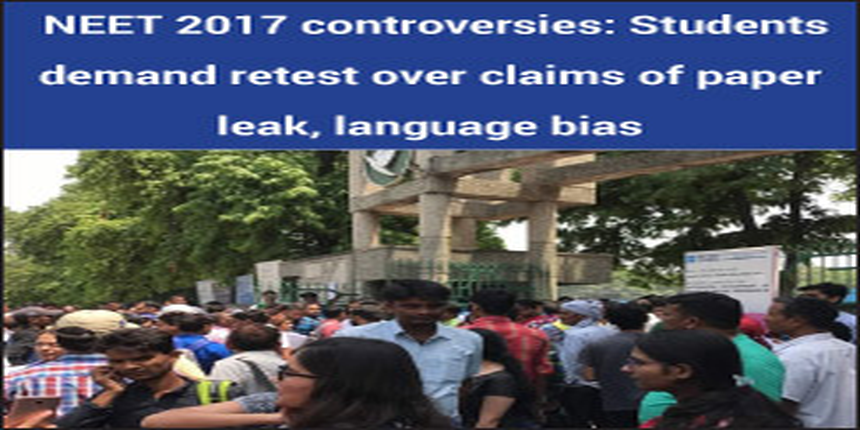 Barely three days after NEET 2017 was conducted on May 7, candidates are raising demands for a re-test following allegations of paper leaks and language bias in regional question papers. As per an increasingly vocal number of students and education activists across the country, recent arrests made by the Bihar and Rajasthan police with regard to certain gangs attempting to leak the NEET 2017 Question Paper are not reasons for relief but only indicative of a larger rot in the system. A memorandum published by students protesting in Delhi against the controversies associated with NEET 2017 makes the prevalent sentiments against the exam quite clear. Describing NEET 2017 as one of ‘history’s most felonious affairs’, it reads,”Medical students and their parents are immensely outraged at the recent anomalies surfacing throughout the countryâ€¦The latest reports underline the fact that the entire process has been tainted and sanctity of NEET has been breached. If such irregularities continue to prevail in such (a) prestigious examination, it will generate a sense of frustration among genuine students, with aversion to the concept of entrance exam...”

Social media is also abuzz with demands for a retest as thousands of candidates are crying foul over the paper leak issue and the CBSE’s denial of these incidents. As commented by a student on Twitter, “NEET was a massive scam. And it is impossible to catch all the cheaters. The exam should be held again in a proper fair way.”

While the police forces in both states have claimed that they were able to arrest a few of the gang members before they could leak the paper, reports in the media suggest that the culprits were able to share images of the question paper with their accomplices in other states before the police could reach them in time. Given that the accused in Patna were nabbed from inside the van carrying the question papers to one of the centres, this possibility cannot be entirely discounted.

Many local newspapers and social media commentators have also suggested that the paper leak had been planned well in advance and could be a scam well in excess of Rs. 600 crores. They allege that candidates who had coughed up the required money were provided answers to the question paper through inscriptions on their NEET Admit Cards, with many exam invigilators also paid off by the gangs to allow this blatant cheating. As shared by the arrested gang members in Patna and Jaipur, a majority of the candidates who had approached them for the question paper hailed from reputed well-to-do families and were also accompanied by their parents in many cases.

The CBSE is now being urged to hold NEET afresh, with students and activists expressing their dismay at the silence being maintained by the exam organizing body regarding the issue of paper leaks. On May 10, protesting NEET candidates came together in Lucknow and other parts of Uttar Pradesh to demand for a fresh opportunity to take NEET. Protests have also been made outside the CBSE headquarters in Preet Vihar, New Delhi and at prominent public spots in Patna and Kota.

Another major NEET controversy which has been steadily gathering steam over the past few days and leading to further demands for a retest revolves around the varying difficulty levels of the question papers depending on the language. Maharashtra and West Bengal were the states from where the maximum complaints were received from students regarding variance in the Marathi and Bengali papers in terms of question paper difficulty and exam pattern. The standard procedure followed whenever an exam paper is conducted in different languages is for it to be translated word for word for the purposes of fairness but if the allegations of the students from these states is anything to go by, this was evidently not the case for NEET 2017. Confirming their intention to file an official complaint with the CBSE and the Ministry of Health and Family Welfare, the State Education Minister of West Bengal, Partha Chatterjee said, "It was expected that the questions would be identical, but the questions in Bengali were much tougher than the ones framed in English...We are strongly protesting this.”

Students who appeared for the Marathi paper also expressed their shock at finding the question paper to be completely different from that in other languages, with many claiming that the questions and pattern varied upto an extent of 85% when compared to the English paper. While some even said this made the paper easier, most are just confused as to how the paper will be standardised and what is the purpose of giving different questions in a centralized exam. According to noted education activist Dr. Amit Gupta’s social media post, “It appears like CBSE didn’t bother to translate English questions in regional languages and just copy pasted questions from whatever question bank they had available in regional languages otherwise there appears no reason to give different questions in different regional languages.”

To add to the NEET language chaos, reports from Telangana suggested that students at a particular exam centre were forcibly given the English and Hindi language papers despite having opted for Telugu in their NEET Application Forms.

As per the official notification released by the CBSE in January, NEET 2017 was to be held in ten languages. What seemed like a welcome decision at the time also immediately transformed into a source for controversy with the Students Islamic Organization of India (SIO) filing a case with the Supreme Court demanding for the inclusion of the Urdu language as well. The apex court finally ruled that Urdu be included from NEET 2018 onwards. Given the errors in the NEET paper for the existing list of languages, the addition of a new language only indicates that the CBSE has its work cut out for next year.

If the paper leak controversy was not enough cause for worry for the NEET officials, reports from Goa also revealed that four people were arrested for attempting to impersonate candidates. This ofcourse came close on the heels of the shocking case in Kerala, where the humiliation suffered by a female candidate on being asked to remove her innerwear before entering the exam hall was debated upon in the state assembly and even led to the CBSE issuing an official apology. Many coaching experts have also discovered discrepancies in atleast four of the NEET questions, with the CBSE’s response on the marking scheme for these questions still awaited.

NEET 2017 has ofcourse been in the news for all the wrong reasons ever since its introduction, with the Supreme Court deciding an age limit controversy in favour of the students just days after the CBSE was also forced to alter a new rule on the maximum number of attempts. Perhaps it was this never-ending list of issues surrounding the exam that also led to over 60,000 candidates, almost 5% of the number who registered, to skip it, a worrying increase of more than 2.5% from last year.

While it remains to be seen if the growing demands for a NEET 2017 retest are met before the results are declared on the scheduled date of June 8, what can be said for certain is that very few of the 11 lakh candidates who appeared for the medical entrance exam will currently be in agreement with the CBSE claim of the exam being conducted “peacefully and smoothly across the country”.

For the latest updates and articles on NEET, visit medicine.careers360.com!

According, to your rank and caste category these are the colleges in which you get admission in MS General surgery-

It seems that you are a 2019 pass out as BSEB 2020 results are expected to be released by fourth week of march ( https://school.careers360.com/articles/bihar-board-12th-result ). Coming to the eligibility criteria NEET has clearly state physics, chemistry, Biology/Biotech to be the core subjects in your 10+2 or equivalent from recognised board ( https://medicine.careers360.com/articles/neet-eligibility-criteria ) but since this issue is not from your side, it is better to contact NEET helpline and BSEB to resolve it. They could better guide you on this.