The Medical Counselling Committee (MCC) will organize NEET counselling 2017 from July 3 as the committee has released the counselling schedule for NEET 2017. The counselling schedule was released soon after the NEET 2017 Result was declared on June 23 by the CBSE. The NEET 2017 Counselling will be conducted in online mode for all those candidates who have qualified for admissions in government medical and dental colleges across India in the All India Quota. The counselling for NEET will continue to take place in two-round format similar to last year. The Directorate General of Health Services (DGHS) will remain as the body responsible for conducting counselling for 15% All India Quota seats. 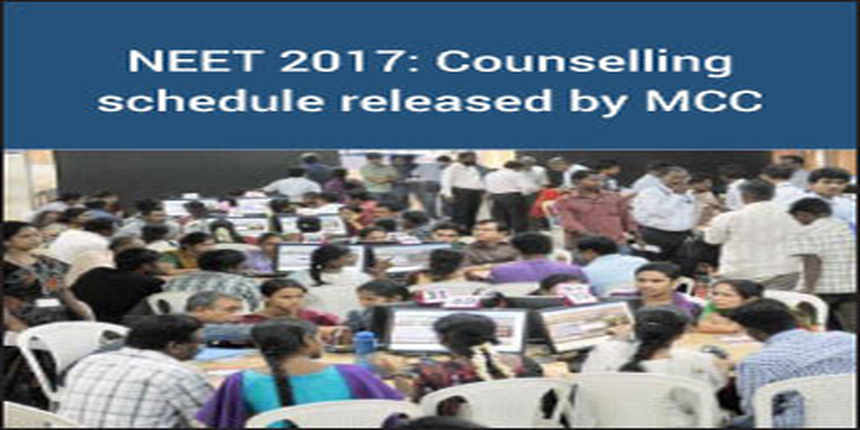 Candidates can check the counselling schedule of NEET 2017 All India Quota seats as declared by the MCC in the table below.

As per the schedule of NEET 2017 counselling, the registration and choice filling process will begin from July 3 onwards. The first round of counselling result will be published on July 15. All medical aspirants who qualify for medical college admissions through NEET 2017 should note that commencement of MBBS/BDS classes for 2017-18 academic year will begin from August 4. The rest of the counselling details for NEET 2017 can be seen by candidates in the table below.

Candidates must note that that since Andhra Pradesh, Telangana and Jammu and Kashmir do not participate in central pool of All India Quota seats, colleges from these states will not be participating in admission under All India Quota seats. Hence, these states will conduct counselling for 100% state quota seats. All the other states are expected to release their respective rank lists and counselling schedules shortly. This was confirmed via a Supreme Court verdict on May 9, where the apex court clarified that NEET Counselling for the All India Quota seats in all colleges and seats from Deemed Universities would come under the ambit of the DGHS while the State Quota seats would come under the ambit of the state governments.

Check out medicine.careers360.com for the latest news and updates on NEET!