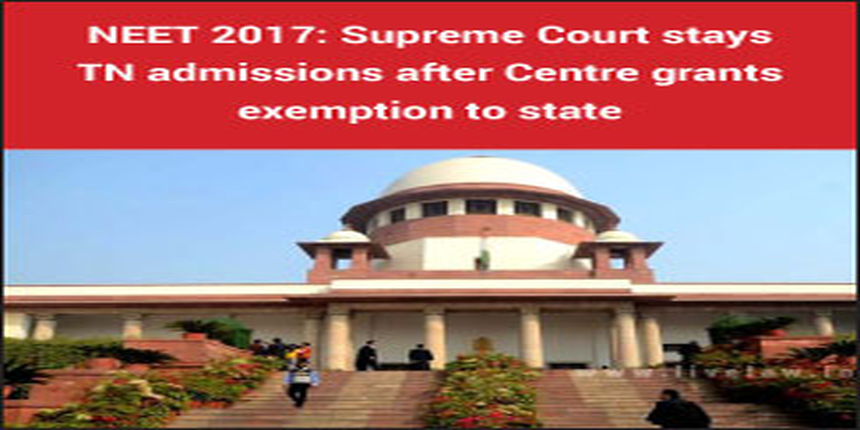 The Supreme Court has stayed the NEET 2017 admissions process for MBBS and BDS seats in Tamil Nadu till Tuesday, August 22.  The order comes one day after the Union Law Ministry had accepted an ordinance of the Tamil Nadu government to exempt the Government medical colleges in the state from admitting students through the national level medical entrance exam for a period of one year. The state, which believed that it could now proceed with medical admissions outside of the ambit of NEET, will now have to await the apex court’s order on the issue.

Out of the approximately 88,000 students who appeared for NEET in Tamil Nadu, only around 4000 were from the CBSE Board and as per the NEET Result, more than 70% of the seats in the Government medical colleges would go to these students and only 5% of State Board students who cleared NEET 2017 will be able to avail admissions here, thereby necessitating some sort of reservation for State Board students so that they do not miss out on seats, the Government most recently argued.

Observations of the Supreme Court

Passing the stay order, a three member Bench headed by the soon-to-become Chief Justice of India Dipak Misra and comprising Justices Amitava Roy and AM Khanwilkar stated that cancelling NEET at the last second and admitting students on the basis of their Class 12 marks, as has been the established practise in Tamil Nadu for over a decade, would be unfair on CBSE Board students and others who had prepared specifically for the exam. Therefore, it was necessary to ‘strike a balance between the interest of students from a rural background and those who had qualified for the NEET examination’ this year. As per media reports, apart from ordering for the release the much-delayed medical merit list, the Bench also directed the state to furnish before it details of all students who have qualified for NEET which would specify how many of them belonged to State board schools. The order means that the admissions process for MBBS and BDS in the state have been delayed once again and the final outcome will have to be awaited until Tuesday.

Castigating the Government for its lax attitude thus far, the apex court also said that it was necessary for concern to be shown for all sets of students. “No student must suffer because of the state’s proposed legislation. You have procrastinated for a year while students were preparing for NEET,” Justice Misra was quoted saying as per media reports.

Multiple issues have been festering in the background or are on the verge of being triggered around the issue of NEET exemption from Tamil Nadu. Apart from raising the question of how other states, including Gujarat (where the demands for exempting Gujarat medium students from NEET have been rising), would react to the Centre granting only one state permission to exclude itself from what was meant to be a uniform national level exam process, the exemption has also prompted allegations of containing political undertones from various sides. While Nalini Chidambaram, counsel for the protesting CBSE sudents believes that this was done not for the welfare of state board students as stated by the Centre, rather ‘as a quid pro quo for (the Tamil Nadu Government) supporting the NDA Candidates for the Presidential and Vice presidential candidates’, another faction of protestors believes that the proposed ordinance would indirectly favour private colleges, where the seats would have otherwise gone vacant.

A recap of events

Earlier, on January 31, 2017, State Health Minister C. Vijayabaskar had moved two bills in the Tamil Nadu assembly, seeking to exclude the state from the purview of National Eligibility cum Entrance Test (NEET) UG and PG, the uniform medical entrance examinations introduced last year for admissions to undergraduate and postgraduate medicine and dental courses across the country. Later in February, the new Tamil Nadu chief minister Edapapadi K. Palaniswami had announced that these two Bills had been sent to then-President Pranab Mukherjee for approval. The rationale behind seeking exemption from NEET, as explained by Minister Vijayabaskar, was that the majority of students appearing for the exam belong to rural areas and economically weak families, resulting in a struggle to access quality medical coaching. Given that there already exists a rigorous examination of merit in the form of the Class 12 board examinations, it would be unfair to expect these students to prepare for a separate uniform entrance examination which would determine their future in one stroke.

However,  despite NEET 2017 being held on May 7 and the result being declared on June 23, not receiving an assent from the side of the President’s side prompted the state to opt for an alternative route. As per a Government Order released by the Tamil Nadu State Health and Family Welfare Department on June 22, 85% of all medical and dental college seats in the state were to be reserved for students who completed their schooling in the State Board, while only 15% seats would be reserved for students from CBSE and other Boards. Following vociferous protests by CBSE students against this ruling, the Madras High Court cancelled this controversial new rule on July 14 as such a reservation not only disturbed the objective of NEET, which was to introduce a common pathway to medical admissions without any discriminations, but was also violative of the right to equality of the CBSE students as guaranteed by Article 14 of the Constitution. The Court had directed the Tamil Nadu Government to issue a fresh merit list and conduct the counselling process accordingly.

With this option also thrown out of the window, and the time for conducting medical admissions running down, the state decided to directly approach the Centre and began talks with the Prime Minster Narendra Modi and the Health Minister JP Nadda on separate occasions. It also attempted to rope in the Union minister Nirmala Sitharaman, who hails from Tamil Nadu, to allow an exemption to be granted for only Government medical colleges at the very least. The request was accepted on the conditional basis that the state would pass an ordinance regarding the same, which was very promptly submitted on August 14. Finally on Wednesday, August 16, the Union Law Minister Ravi Shankar Prasad and Attorney General KK Venugopal cleared the draft Ordinance which finally allows Tamil Nadu to hold medical admissions on the basis of Class 12 marks. While the Supreme Court’s stay order may have temporarily thrown a spanner into Tamil Nadu’s desire to appease students of its own board, it is highly likely that the final decision will only serve as a prelude to the next chapter of NEET 2017 related controversies.

The cut-offs for NEET PG vary every year on staye as well as all India quota level depending upon various factors. The cutoff for general category is usually 50th percentile. The link given below will help you get an idea on the cutoff trend-

The cut-offs vary every year on state as well as all India quota level for NEET. You need to mention the state in the question, in which you are interested to take admissions in the medical colleges. Talking about the general cutoff all over India, you need to score 650+ marks out of 720 to be able to get a seat in government medical College or to increase the probability to get a seat. The cutoff trend is shown in the link given below which will help you analyse the situation and decide well -

I recieved a form regarding admissions in CMC Vellore before NEET? Do I need to fill it to get admission?

hi my rank in neet pg is 73000.i belong to sc category.Is their chance to get ms Opthalmology?N my AIQ category rank is 6532

Going by previous All India cut offs and your rank, you may have decent chances in Santosh Medical College for MS Opthamology.Having said that, this is 2019 data and cut offs change every year depending on various factors such as no.of Candidates appearing for the exam, no.of Candidates qualified, difficulty of the exam, and no.of seats available for each specialisation. Please try our College predictor to check the possibility of other specialisations with you rank across India:  https://medicine.careers360.com/neet-pg-all-india-college-predictor

Going by previous All India cut offs and your rank, you may have decent chances in Orthopaedics in Medical Colleges like: