In what comes as a major boost to lakhs of NEET aspirants across the country, the Medical Council of India (MCI) has agreed to remove the controversial upper age limit rule for NEET 2017, media reports mentioned on Friday, March 17. This comes right on the heels of reports which stated that the Supreme Court mandated Oversight Committee on the MCI, headed by former Chief Justice of India RM Lodha, had already recommended on February 28 that the age eligibility criteria be removed from the National Eligibility cum Entrance Test (NEET) 2017. With students nervously awaiting the Supreme Court’s final verdict on the issue on Monday, March 20, these new developments may have already clinched the decision in their favour. 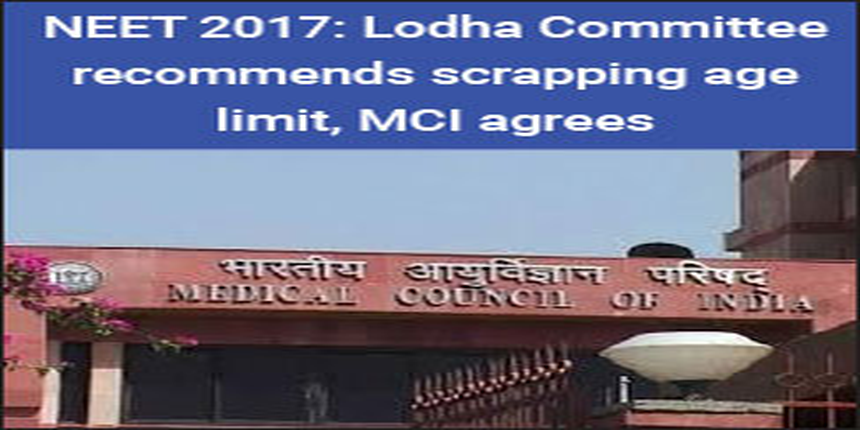 Speaking to Careers360, noted activist Dr. Anand Rai, who is part of the petition team challenging the age limit criteria, said, “We are pleased to know that the Oversight Comittee headed by Justice Lodha has arrived at this conclusion. It is imperative for the Supreme Court to take into consideration the Committee’s recommendations for the hearing and this should mean that the verdict is passed in our favour.” Dr. Rai also implored the CBSE and the MCI to officially remove the age limit criteria so that the matter can be resolved before reaching the Court on Monday. “A lot of students have gone through tremendous mental agony due to this prolonged legal battle. While it is good that the MCI has declared that it is removing the age limit criteria, the CBSE as the exam implementing body should immediately issue an official notification on this and re-open NEET applications so that the matter can be resolved before March 20 itself and students rendered ineligible earlier can apply for NEET 2017.”

The Oversight Committee, which was formed by a five member Supreme Court Bench headed by Justice Anil R Dave in May last year to oversee the functioning of the MCI, had recommended in its report on the age limit issue that given the “dearth of doctors in the country”, the upper age limit criteria for admissions through NEET should be removed. Earlier on Thursday, MCI Vice-President Dr. CV Bhirmanandam informed media persons that they had received the recommendations of the Oversight Committee and had decided to go with it. "The Oversight Committee felt such limitations will reduce the number of doctors in the country. The Union Health Ministry agreed and suggested the recommendations to us. We have passed it," Dr. Bhirmandandam was quoted as saying. It is believed that the Lodha Committee’s recommendations do not include suggestions on introducing any alternate upper age limit or other criteria.

The NEET upper age limit criteria has been in the eye of a storm ever since the CBSE issued its controversial eligibility notification on January 31 this year. The notification, which introduced unexpected changes to the NEET 2017 rules including caps on the number of attempts and a new upper age limit of 25 years (30 years for reserved candidates) disqualified thousands of MBBS/BDS aspirants in one stroke. After protests by student bodies across the country, the CBSE issued a clarification on February 6, revoking the rule on the number of attempts. On February 10, a petition challenging the upper age limit criteria was filed in the Supreme Court by Sabyasachi Rai and other students with the demand that the government roll it back. A similar petition was filed in the Lucknow bench of the Allahabad High Court on February 16.

Both the Apex Court and the Allahabad High Court had issued notices to the Medical Council of India and the Centre to clarify how the NEET upper age limit criteria has been determined, and whether the correct procedure had been followed in its introduction. On February 27, a three member bench of the Supreme Court comprising Justices Dipak Misra, AM Khanwilkar and Mohan M Shantanagoudar had heard the arguments presented by the Medical Council of India (MCI) and decided to adjourn the verdict to March 20. The Allahabad High Court followed suit a day later.

Worringly for students, the Supreme Court order on February 27 had stated that if the verdict was passed in the petitioners’ favour, the NEET application window would be reopened only for those aspirants who had approached various Courts before the NEET Application Form last date of March 1. However, it is now expected that the final judgement will make the application window open for all.

It now remains to be seen if the CBSE and the MCI release official notifications revoking the upper age limit criteria and re-opening the NEET application window in the next two days, thereby effectively ending another proctracted NEET related battle in favour of students, or whether some other arguments or clauses remain to be introduced which can only be resolved by the Supreme Court verdict on March 20. If the MCI and Lodha Committee statements are anything to go by, the students can definitely believe that the odds are in their favour.

Check www.medicine.careers360.com for the latest news, views and articles on NEET!