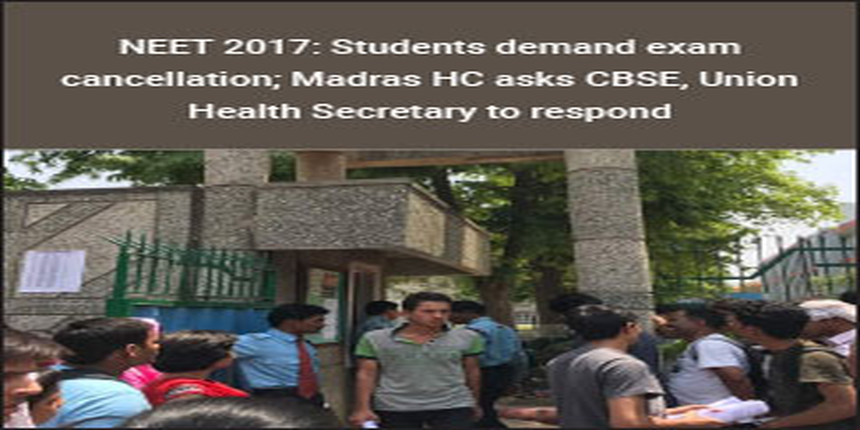 Amid demands for cancellation of NEET held on May 7, the Madras High Court has sought responses from the Central Board of Secondary Education (CBSE) and the Union Health Secretary on controversies surrounding the question paper of the national level MBBS/BDS entrance exam. An official notice has been issued in this regard by the Madurai Bench of the Madras High Court, where nine medical students filed a Writ Petition demanding for the exam to be canceled. According to them, the official question papers released by the CBSE show varied questions in different languages. They want a exam to be conducted with a translation of the same question paper being used in all languages. “One India, one question paper in NEET is a must, otherwise the method of assessing intelligence and aptitude would differ...NEET examination should be cancelled and fresh examination with uniform question papers (should) be conducted,” the Madurai petitioners, all of whom appeared for the exam in English, were quoted as saying to media sources.

Responding to the petition, Justice N Seshasayee asked the Centre and the CBSE to reply to the allegations within one week. However, the judge refused to pass any order at this stage regarding the students’ request for an interim injunction that would restrict the Directorate General for Health Services (DGHS) and state governments from proceeding with medical admissions this year on the basis of NEET scores.

None of the issues however, have united them to the extent that the claim raised by students from various states about the NEET Question Paper being different in different languages has. While the established practise with regard to holding any exam in different languages is to translate the questions and keep everything else the same for the purposes of standardization, this was apparently not the case for NEET 2017, despite a uniform syllabus being announced.

Ever since students from West Bengal, Maharashtra and Gujarat pointed out that they had received different question papers which were more difficult in nature and not even based on the same pattern as the English and Hindi ones, demands have been rising on social media and other platforms for a NEET 2017 re-exam. Infact, following the controversy in Telangana where students were forced to appear for NEET in English and Hindi despite having opted for Telugu, the CBSE organized a re-exam for the 230 affected candidates in their preferred language on May 17. This may have encouraged the protesting candidates in other states to believe that the CBSE will be receptive to their demands for a re-exam, especially given that HRD Minister Prakash Javadekar also assured them that a clarification will soon be issued regarding the languages controversy.

The students battling the case in Madurai may have to wait and see whether the CBSE indeed comes up with a satisfactory response or even acknowledges their claim that NEET was indeed different in different languages, thereby rendering it unfair and raising prospects of a re-test.

NEET 2017 will provide admissions to around 90,000 Medical and BDS seats in all Government, Private and Deemed medical educational institutions across India. Held in offline mode in 104 cities across the country, the exam was attended by more than 11 lakh candidates. Also, for the first ever time, the exam was held in English, Hindi and eight other regional languages, a decision which in hindsight could have been executed much better.