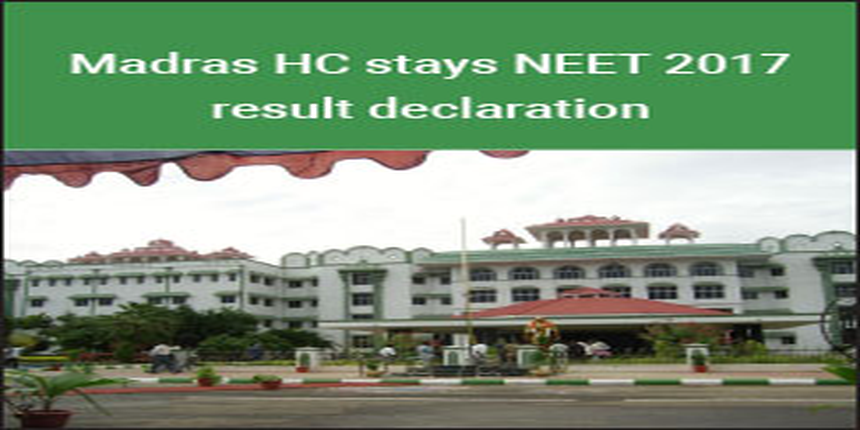 As per the Court order, Central Board of Secondary Education (CBSE), the exam conducting body against whom the petition was filed, has now been prevented from releasing the results of NEET 2017 until June 7. While the reasoning given by Justice MV Muralidharan mentioned how setting different question papers in different languages was unfair and would lead to skewed results, whether this verdict will cause the CBSE to rethink its stance on holding NEET again remains unclear since the scheduled date for declaring NEET 2017 Result was already fixed as June 8.

In the first hearing which took place last week before Justice N Seshasayee, the Court had issued an official notice to the Union Health Secretary and the Central Board of Secondary Education (CBSE) to respond to the demands of the petitioners to cancel NEET 2017 and hold the exam again. The petitioners had contended that setting different papers in different languages without warning would lead to unfair results and wanted the exam to be held again with a translation of the same question paper being used in all languages. Justice Seshasayee had however refused to grant an interim junction and only asked the CBSE and the Centre to respond within a week.

With Justice Muralidharan’s latest order though, the petitioners can feel encouraged that their demands of “One India, one question paper” may finally be heard. All nine of the petitioners had written the exam, conducted on May 7, in the English language and were shocked to find out that questions in Tamil were much simpler. They further discovered that students in West Bengal, Maharashtra, Gujarat and some other states were also agitating over different questions papers being prepared in different languages. “One India, one question paper in NEET is a must, otherwise the method of assessing intelligence and aptitude would differ...NEET examination should be cancelled and fresh examination with uniform question papers (should) be conducted,” the Madurai petitioners were reported as saying to media sources.

The question paper controversy is just one of many that the NEET exam has found itself involved in this year. The exam is already being dogged by allegations of paper leaks and complaints against the aggressive frisking of candidates at certain exam centres. However, as reported by Careers360 on May 19, the maximum agitations have been caused by the controversy about the CBSE not setting uniform question papers across the ten languages in which NEET 2017 was held in.

Just days after the petition with the Madurai Bench of the Madras High Court was filed, the parent of another candidate had filed a case with the main Madras High Court Bench demanding for cancellation of the exam on the basis that questions in the English language paper were from the CBSE syllabus and questions in the Tamil language paper were from the State Board syllabus. The petitioning parent had cited Article 14 of the Constitution, arguing that setting the NEET Question Paper differently in different languages without informing candidates was a violation of their right to be treated equally in the process of selection of such an important exam. Even in that instance, the Madras HC had issued a notice to the CBSE to file a response with the Court within a limited timeframe, the hearing of which is now awaited.

Given that the CBSE has consistently maintained that NEET 2017 was held without any hitches and there is no possibility of a re-exam, its response to the Madurai Bench’s injunction order will be interesting to see.

Go to medicine.careers360.com for the latest articles and updates on NEET!