The Medical Council of India (MCI) has issued an advisory to NEET qualified students who are applying for admissions to MBBS and BDS courses, asking them to ensure they follow the designated common counselling process, failing which their admissions will be deemed illegal. A list of colleges which have been barred from admitting students into medical courses for 2017-18 has also been released as part of the advisory.

Informing students about ‘certain unscrupulous elements (who) are misleading students by alluring them that they would get them admitted in MBBS course(s) in Medical Colleges’, the MCI cautions students against paying people who demand capitation fee for admissions. As per the advisory, ‘These activities are illegal and students are cautioned not to be misled by any such frivolous statements made by these college authorities’. 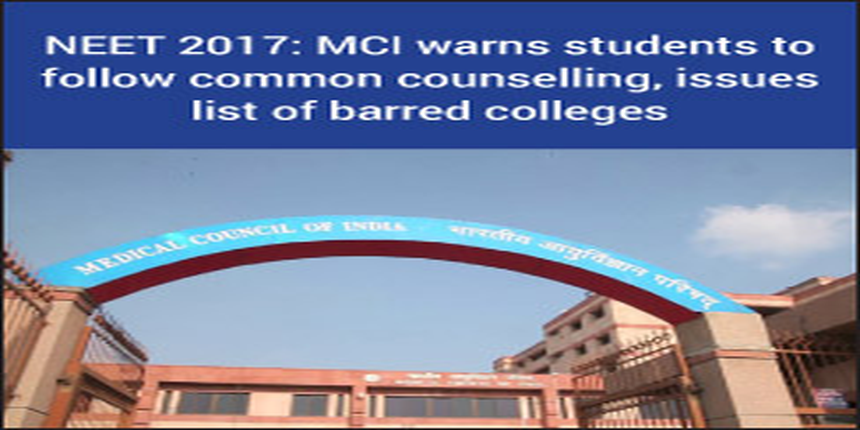 The advisory goes on to clearly specify that as per the pre-determined counselling process of the NEET 2017, only the Directorate General of Health Services (DGHS) will be conducting counselling for 15% All India Quota seats in Government Medical Colleges and Deemed Universities, while states and Union Territories will have their own designated authorities for the 85% seats offered by Government and Private colleges in their territories. ‘Admissions made without common counseling is impermissible and illegal’, the advisory warns.

Candidates interested in taking admissions in medical colleges were also requested to check the MCI website as to whether the colleges had been granted permission by the Central Government and only then proceed with admissions. A list of 69 colleges from 16 states which have either been barred from holding admissions or can only conduct admissions to a lower number of seats than advertised, was released by the MCI.

51 colleges have been outrightly denied permission to conduct admissions for the forthcoming academic year. Another 18 colleges have not been allowed to increase their intake from existing levels, effectively removing 900 proposed admissions seats from the equation. Uttar Pradesh leads the way with 13 affected colleges while Delhi, Gujarat, Jharkhand, Odisha, Punjab and Uttarakhand have one each.

Candidates can read the MCI advisory and the list of colleges which have been barred or denied permission to increase intake from the window below:

Stay tunned medicine.careers360.com for the latest news and updates on NEET!

Please tell me the approximate number of students applied for neet from different categories in 2019 and if u know in 2020 also.

If we talk about NEET 2020, total of 16.84 Lakh candidates registered themselves for NEET 2020 which broken all records of previous years.

For more details about NEET 2019 visit the link given below :

For more details about NEET 2020 visit the link given below :