Central Board of Secondary Education (CBSE), which has been facing criticism for conducting NEET 2017 in a poor manner ever since the cases against mistreatment of candidates on May 7, has another reason to worry. This time more than 57,000 candidates out of over 11.38 lakh applicants skipped the national level test as compared to that of previous year. “The overall attendance in NEET 2017 was approximately 95%," said CBSE. 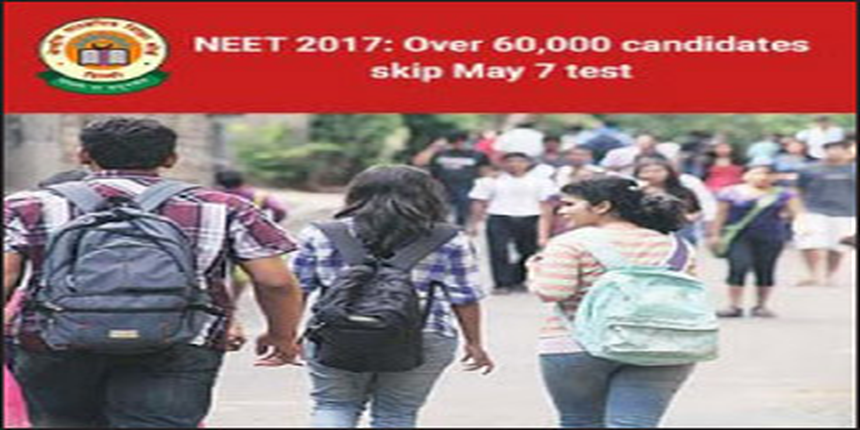 Last year, 2.5 per cent candidates had skipped the test, this share has doubled in 2017. While approximately 18,777 candidates did not appear for NEET in 2016, there has increased to a great extent, which is 57,000. The table below brings to you statistics of number of applicants, actual test takers and absentees.

The total number of NEET applicants this year was more than 11.38 lakh candidates. The number of applicants is highest ever since the Supreme Court scrapped all state and institute level medical entrance tests. Interestingly, the highest number of test takers appeared in the state of Jammu & Kashmir with 97.10 per cent attendance in Srinagar centre.

According to CBSE, the test was held smoothly at 1921 exam centres in 103 cities across the country. Besides, more than 11.38 lakh candidates registered for the exam including PIOs, foreign nationals, OICs and NRIs. Out of the total number of applicants, 6.42 lakhs were female candidates.

CBSE issued clarification on NEET 2017 conducted on May 7. The board came under scanner as media and parents of candidates appearing for NEET accused of insensitivity and trauma. The board blamed the incident on "few overzealous female frisking staff" of the exam centre and expressed regret for the inconvenience faced by the candidate.

However, according to CBSE, the board followed the protocol of frisking after the cheating scandal of AIPMT 2015. CBSE also clarified that the candidates were well informed about the frisking guidelines and dress code in advance.