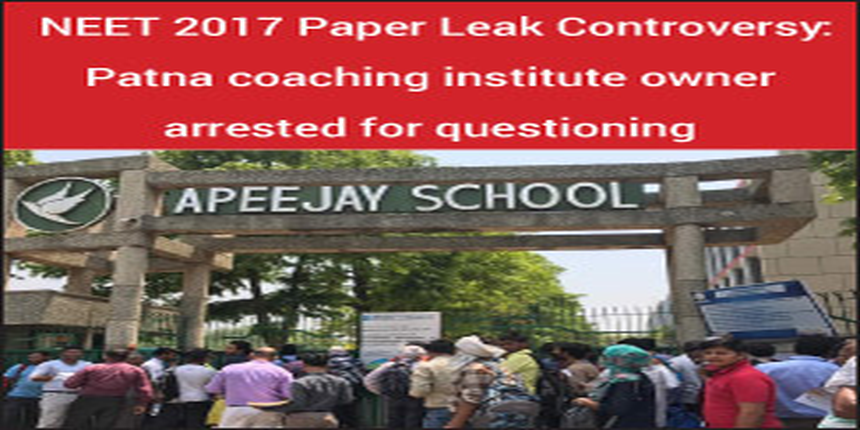 As per media reports, five of the accused were nabbed by the Bihar Police on the same day of the exam as they attempted to click photographs of the question paper while travelling in the van delivering the papers to a particular centre in the city. Apart from the van driver, the accused included two medical students studying in prominent colleges of Patna, one law student and the exam centre superintendent. “It is a great achievement of Patna police. We were successful in stopping the crime before it could take place. We will catch the kingpin also very soon,” Patna SSP Manu Maharaj was quoted as saying by media sources.

Now, barely two days later, the Bihar Police has arrested the alleged kingpin of the question paper leak controversy from Sheikhpura district of the state. The owner of a coaching centre in Patna, the accused was picked up on May 10 on the basis of leads provided by the previously arrested gang members. As per the police, the exam centre owner’s involvement in plotting similar rackets in Jaipur, Kolkata and Delhi is also being probed, along with allegations that his gang charged upwards of Rs. 40 lakh from desperate candidates with the promise of providing them with answers to the NEET 2017 questions.

Arrests made in Jaipur also

The arrests in Patna come close on the heels of separate arrests made by the Anti Terrorism Squad of the Rajasthan Police in relation to attempts made by another gang to leak the NEET paper in Jaipur. Two of the accused were arrested from Jaipur and two from New Delhi. As per the ATS, the accused in Jaipur were arrested during a raid where it was discovered they were tutoring candidates on the basis of a copy of the alleged NEET 2017 question paper. Around 11 candidates had been charged upto Rs. 5 lakhs for access to this particular paper, which the police later ascertained had no relation with the actual NEET 2017 Exam paper. One of the accused is also alleged to be working with the Rajasthan government’s Animal Husbandry department. The ATS informed the media that they were still in the process of ascertaining whether the gangs had any links to the one arrested in Patna.

While there are yet to be any confirmed reports of an actual question paper leak, the latest controversy is sure to add to the worries of the CBSE NEET officials who are still dealing with other negative headlines generated by the exam over the past few days. These include the complaints made by numerous students from exam centres across the country about being forced to change or alter their clothing in inappropriate ways at the time of reporting for the exam, with one particular incident in Kerala leading to vociferous debates in the state assembly. Apart from these, the Governments of Maharashtra and West Bengal are contemplating filing official complaints with the CBSE and Ministry of Health and Family Welfare, following claims made by students that the NEET Paper in these particular state languages was tougher and different from the standard NEET paper in all other languages. Glitches have also been discovered in various questions by leading coaching institutes.

With over 11 lakh candidates appearing for admissions to MBBS and BDS seats in medical colleges across India through NEET 2017, the CBSE had conducted the exam at 1900 exam centres across 103 cities in the country. While it was expected that conducting the national level medical exam on such a large scale for the first ever time was bound to raise some issues, the CBSE’s claim that that “the exam went off peacefully and smoothly across the country” continues to be tested with each passing day.

how much a sc girl candidate should score in neet under state quota to insure mbbs seat in pmch, igmc??

Anamika, in 2019, under State Quota, the cut off ranks for SC Category for the 2 colleges have been as follows:

And after Round 1, the cut off for SC Category was 417. Now cut offs change every year and are dependant on various factors such as no.of Candidates appearing for the exam, no,of Candidates qualified, top NEET score and difficulty of the exam. So you will need atleast 450-475 for seat under SC Category in any of these Colleges. For any guidance during counselling and admission, you can use our MBBS COmpanion: https://www.careers360.com/mbbs-companion

CAN ANYONE TELL ME THAT FOR NEET WE HAVE TO SOLVE ALL CHAPTERS OF HC VERMA OR THAT CHAPTERS THAT ARE IN THE MODULES OR PORTION ???

When you are giving NEET, the first thing you need to focus is the modules or portion prescribed by the exam committee

But in that case as said first complete your syllabus prescribed then do the extra work .