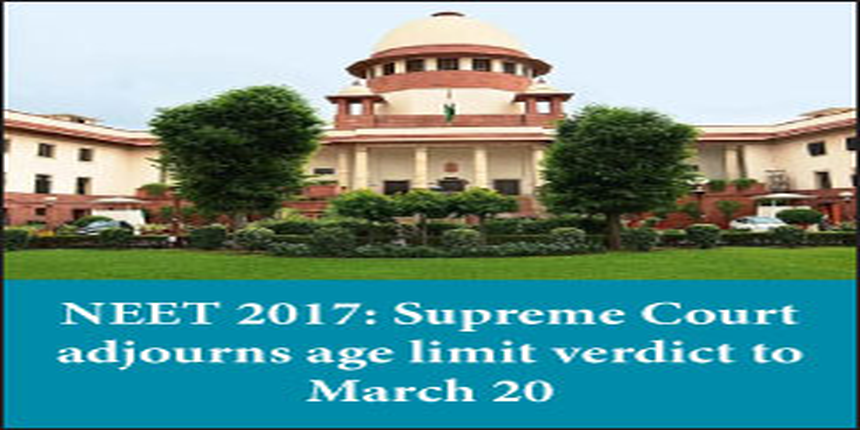 The Supreme Court has adjourned its final verdict on the NEET age limit controversy to Monday, March 20. A three member bench comprising Justices Dipak Misra, AM Khanwilkar and Mohan M Shantanagoudar heard the arguments presented by the Medical Council of India (MCI) and decided upon the new date. The Court had previously adjourned its decision on the upper age limit from February 23 to February 27.

The Lucknow Bench of the Allahabad High Court, which was expected to give its verdict on February 27 in line with the Supreme Court's decision, has also adjourned its verdict to March 20. On Tuesday, February 28, the Allahabad High Court, after being informed about the Supreme Court's adjournment, stated, "It is...informed at the Bar that the matter was taken up yesterday and the Apex Court has been pleased to fix 20.3.2017 in the matter..Let the matters come up on 20.3.2017...In the event any orders are passed by the Apex Court, the same shall be brought to the notice of this Court as well."

UPDATE FROM SC ORDER: As per the SC order released on February 27, if the petitioners challenging the age limit succeed, the NEET application window will be reopened. However, relief will not be granted to any petitioner who hasn't approached the SC or HC before the NEET application form last date. "In case the petitioners succeed, the time for filling up the forms shall be extended. Needless to say, a person who has not approached either the High Court or this Court prior to expiry of the date cannot get the benefit of the order of this Court.", the order reads. It remains to be seen if the NEET 2017 age limit is removed on March 20, and if so, what the recourse for over-age candidates who did not or could not approach the Courts will be.

Latest :  Crack NEET 2020 with NEET Knockout Program( AI-Based Coaching), If you Do Not Qualify- Get 100% MONEY BACK. Know More

Before the adjournment order was passed by the Supreme Court on February 27, the Bench had asked the Medical Council of India whether there existed any provision for upper age limit in the existing Acts governing NEET or whether any such amendment had been appropriately introduced. The MCI replied to the Bench that while they do not have any such provision currently, they are in the process of introducing it. The MCI also informed the Court that it had introduced the upper age limit based on the CBSE’s guidance.

Crack NEET 2020 with NEET Knockout Program, If you Do Not Qualify- Get 100% MONEY BACK

The case so far

On February 10, a petition was filed in the Supreme Court by Sabyasachi Rai and other students, challenging the sudden introduction of this new eligibility criteria with the demand that the government roll it back. After the initial hearing on February 17, the Supreme Court had issued a notice to the Union government and the Medical Council of India seeking their reply on the age criteria for NEET 2017. As the last date for NEET applications was March 1, the Court had termed the matter urgent and requested for the Centre’s and MCI’s replies on February 23 so that it could pass its judgment at the earliest.

The new adjournment has disappointed numerous students affected by the age limit clause, as it further hampers their exam preparations while raising question marks on how those who are above the age limit will be able to apply for NEET 2017 after the last date even if the SC’s final verdict goes in their favor.

Experts, however, suggest there are chances that the Supreme Court may direct the CBSE to re-open the NEET application process if the age-limit is scrapped. Dr. Anand Rai, a member of the team which filed the writ petition, said to Careers360, “While the delay may be frustrating for students, we are positive that the final judgment will be in our favor. The Court has asked the MCI and other respondents to show substantial reasons and evidences in favor of the upper age limit by March 20. Otherwise the Court has said that if the upper age limit is scrapped, the CBSE will have to reopen its online application interface for students who have been unable to fill the form on the previous date.”

The Lucknow Bench of the Allahabad High Court is also in the process of hearing a similar petition regarding the upper age limit. The case had originally been filed in the High Court on February 16 and the bench had directed the MCI and the CBSE to issue its response by February 20. The bench heard the MCI and the CBSE’s replies on February 23, and given that the matter was already pending in the Supreme Court, it also decided to adjourn its verdict to February 27. “We adjourn the matter for Monday i.e. 27.02.2017, calling upon the Central Government as well as the Medical Council of India to show cause as to why the petitioners be also not permitted to fill up their applications ignoring the upper age limit of 25 years”, the Bench had ordered. Before the adjournment however, the Court had stated that the MCI had yet to give a suitable answer as to why the Graduate Medical Education Regulations 1997 were not amended accordingly to introduce the age limit prescription.

On February 27, the two member bench of the Allahabad High Court in Lucknow, comprising Justices Amreshwar Pratap Sahi and Sanjay Harkauli, had adjourned their decision to February 28, stating, "It has been informed at the Bar that the matter has been heard by the Apex Court and some orders have been passed. Put up tomorrow to enable the learned counsel to inform the Court about the orders passed by the Apex Court." On February 28, the Bench again adjourned the case in line with the Supreme Court's adjournement stating that, "...the orders of the Apex Court deserve to be awaited as this identical matter has been taken up before the Apex Court."

NEET aspirants challenging the age limit will now have to wait until March 20 to receive the final decision from both the Supreme Court and the Lucknow Bench of the Allahabad High Court.

I have studied 10th and 12th from new Delhi. I have Aadhar and birth certificate of Lucknow(UP) what should be filled under state of eligibility column in NEET form AIQ

Hey there, good morning. i belong to Muslim religion, category open (general), but as i am Muslim and with open category, is it compulsory for me to select minority as yes in the form because i dont have a minority certificate to show them when needed. i have already selected "No". can i change??

The Information Bulletin says that Candidates who belong to Minority community for example Muslim, Christian, Sikh, Buddhist, Jain and Parsi can select Minority as Yes in the application form. And there is a self declaration form in the Information bulletin in Appendix XIII. You need to download it, fill it up and sign it. And then that will act as a proof of the fact that you belong to Minority community. It's on page 85 at: https://ntaneet.nic.in/ntaneet/ShowPdf.aspx?Type=1F7D662EC0F41DE2013706728E830CBF545FD969&ID=D435A6CDD786300DFF204EE7C2EF942D3E9034E2

how to avoid wrong answers in biology neet exam

The best books for Biology preparation are:

Biology Vol 1 and Vol 2 by Trueman

NCERT Biology Booster by Shri Balaji Publications and NCERT Fingertips by MTG Editorial Baord have topics that are not covered in NCERT.

Human physiology and Genetics have the maximum weightage. Practise questions on Genetics so as to have a thorough understanding of the question pattern. Plant physiology is one easy subject to score. Prepare a comparative table between topics and sub topics of Plant and Animal Kingdoms. And more importantly do not answer when in doubt. You will save negative marking. For any online NEET coaching, you can check our Knock Out package: https://learn.careers360.com/knockout-neet-may/

Shaheen,  be eligible for NEET, you should have completed your 12th with Ohysics, Chemistry and Biology as your core subjects. Even studying Biology as an additional subject will do. But you need to score a minimum aggregate of 50% in Physics, Chemistry and Biology. It is 50% for General Category, 45% for PWD and 40% for OBC,SC,ST. If you fulfil this criteria, you can in general apply for NEET but unfortunately not for 2020 because the application process has been closed by January 6th after extending it once. You may have to wait until 2021.