NEET 2017: SC allows candidates above 25 years to appear in exam 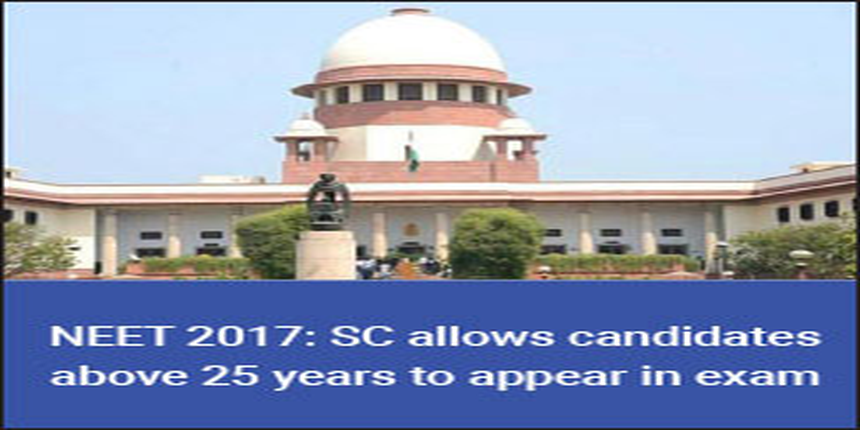 A two member SC Bench comprising Justices Dipak Misra and AM Khanwilkar pronounced their verdict after a prolonged legal battle between the petitioners rendered ineligible by the NEET 2017 age limit criteria on one side and the Central Board of Secondary Education (CBSE) and the Medical Council of India (MCI) on the other. The Bench cited the absence of any notice being issued with regard to regulations framed by the Medical Council of India on the age limit as the primary reason behind passing the verdict in favor of the petitioners. "As we, prima facie, find, such an age limit could not have been determined by way of a notice on the basis of the instructions issued by the Medical Council of India, it is appropriate to direct that all the desirous candidates will be allowed to fill up the forms on the online portal of the CBSE on or before 5.4.2017. Any form submitted beyond 5.4.2017 shall not be accepted," the Bench declared.

The long-awaited verdict, which for now will be applicable for NEET 2017, comes after previous adjournements made by the apex Court in the hearings held on February 23, February 27 and March 20. Infact, in the last hearing on March 20, the SC Bench had already instructed the CBSE to allow the petitioners who had filed the case against the age limit along with other intervening applicants the opportunity to fill the NEET 2017 Application Form until the final hearing date of March 31. The Bench had also stated that all aspirants who were unable to approach the Court before the NEET applications last date of March 1 would be allowed to fill the form along with the petitioners if the Court were to strike down the age limit criteria completely. Much to the joy of students, this is exactly what ensued.

The NEET upper age limit criteria has been in the eye of a storm ever since the CBSE issued its controversial eligibility notification on January 31 this year. The notification, which introduced unexpected changes to the NEET 2017 rules including caps on the number of attempts and a new upper age limit of 25 years (30 years for reserved candidates) disqualified thousands of MBBS/BDS aspirants in one stroke. After protests by student bodies across the country, the CBSE issued a clarification on February 6, revoking the rule on the number of attempts. On February 10, a petition challenging the upper age limit criteria was filed in the Supreme Court by Sabyasachi Rai and other students with the demand that the government roll it back. A similar petition was filed in the Lucknow bench of the Allahabad High Court on February 16.

Both the Apex Court and the Allahabad High Court had issued notices to the MCI and the Centre to clarify how the NEET upper age limit criteria had been determined, and whether the correct procedure was followed in its introduction. On February 27, a three member bench of the Supreme Court comprising Justices Misra, Khanwilkar and Mohan M Shantanagoudar had heard the arguments presented by the Medical Council of India (MCI) and decided to adjourn the verdict to March 20. With the NEET applications last date being March 1, students were left confused and frustrated with the constant adjournements, and could only speculate on what the final outcome would be.

On March 17, in an unexpectedly pleasant surprise for the petitioners, the MCI informed media persons that it had decided to remove the controversial upper age limit rule for NEET 2017. The MCI said that it was doing this in line with the views of the Supreme Court mandated Oversight Committee on the MCI, headed by former Chief Justice of India RM Lodha, which had recommended on February 28 that the age eligibility criteria be removed for the medical entrance. However, the joy of the students was shortlived as just three days later in Court, the MCI performed a bizarre u-turn, declaring that it did not share the Committee’s opinion on the matter and was in favour of letting the age limit remain.

Given the MCI’s constant flip-flops on the issue, coupled with the fact that the Court-appointed Lodha Committee had itself recommended the removal of the age limit, the Bench on March 20 granted all petitioners permission to fill applications until the March 31 hearing.

Finally, with the Court's March 31 verdict, all candidates above the age of 25 who had applied to NEET 2017 have become eligible to appear for the exam and can fill their application forms until April 5. The CBSE has issued its notice in this regard which can be seen by the candidates below. The final verdict regarding the NEET upper age limit criteria will be given by the Court in July. Even if the SC recommends the re-introduction of the age limit for NEET 2018, atleast the thousands of students who were denied the opportunity to appear for NEET 2017 at the last moment after preparing for so long will be able to appear for the exam this year and not have their time and efforts wasted.

While passing its verdict in favour of the students, the Bench acknowledged the difficulties the CBSE could face in re-opening the application forms until April 5. Towards this end, it has directed that the CBSE may take the help of the Collector or Commissioner of any district or city in which it requires logistical support in accepting the forms and holding the exam for the additional students who will now apply for NEET 2017. Dispelling the chances of the legal battle being extended in the lower courts, the SC also stated that even if any High Court were to "pass any order contrary to the present order, the CBSE shall be bound by the order passed by this Court as far as the cut-off date is concerned".

NEET 2017 will be conducted on May 7, 2017 in 10 different languages for all aspirants planning to pursue medical courses in government or private colleges of India. The exam will be held in a record 103 cities across India, with 23 new cities being added by the CBSE this year. Candidates may click here to read the latest preparation tips for NEET 2017.