NEET 2017: SC clears air on Counselling process, Deemed University seats to be filled by DGHS along with 15% All India Quota seats

Deemed Universities will now fill their MBBS and BDS seats through Centralised Counselling conducted by the Directorate General of Health Services (DGHS), the body currently responsible for counselling of 15 per cent All India Quota seats through NEET, the Supreme Court has ruled. The SC order passed on May 9 also makes it compulsory for all medical and dental institutions to announce their fee structure prior to the counselling so that candidates can decide if they find it affordable and accordingly pay the admission fees at the time of counselling directly to the state counselling authorities. The apex court also ruled that representatives of minority institutions will be part of the counselling process conducted by the states and that the reservation criteria will be determined by the individual institutions only. 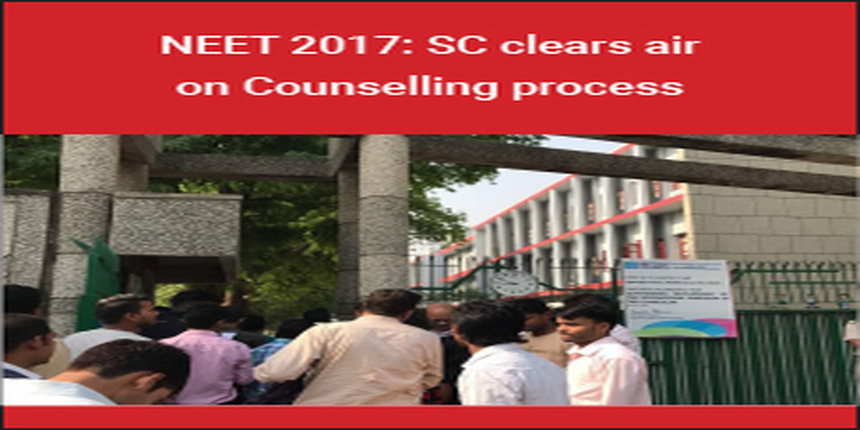 A two member Bench comprising Justices Dipak Misra and AM Khanwilkar cited the ‘All India character’ of Deemed universities while passing the verdict, saying, “Common Counselling for admission to All India Quota seats in Government Medical Colleges shall be conducted by the DGHS. The counselling conducted by DGHS will also include Deemed Universities as they have an All India characterâ€¦(they) shall also include Deemed Universities run by religious and linguistic minorities.” Passed in relation to Writ Petition number 267/2017 filed by the Dar-Us-Slam Educational Trust, the verdict also shed light on other important aspects related to the counselling process for the National Eligibility cum Entrance Test 2017.

Counselling to remain a two-round process

Upholding an SC judgement from 2016, the Bench stated that common counselling for NEET will continue to take place in the existing two-round format. As per the Bench, the common counselling for 85% state quota seats in all Government as well as Private Medical Colleges shall be conducted by the state governments only. It also added that the All India Quota seats in all colleges and seats from Deemed Universities would come under the ambit of the DGHS while the State Quota seats would come under the ambit of the state governments.

Minority institutions can have their own reservation criteria

The apex court also clarified that introducing common counselling by the DGHS for linguistic and religious minority institutions, be they Deemed or affiliated to State Universities, will not in any way infringe upon the rights of these institutions to provide admissions to the students of their respective communities as per the applicable minority quotas. “The minority quota seats, if any, in institutions run by minorities will be filled up by minority students only. Therefore, the rights of minority institutions are fully protected,” the Bench said. To ensure this, the Bench went on to specifically mention that whenever the common counselling will be held by the State Government, representatives from all colleges, particularly the minority medical colleges, will be allowed to be a part of the admissions or counselling committee. After the NEET 2017 Results are declared, the DGHS and State Governments will prepare separate merit lists of minority candidates seeking admissions to these institutions as per the order of merit, applicable under the state quota seats. The minority representatives in the counselling committee will then verify the minority status of these candidates and give the go-ahead for admissions.

Regarding vacant seats: No other counselling chance after admission confirmation

In what will come as a relief to many aspirants who were concerned about the admission process being hampered by the vacating of seats, the SC made it clear that those students who took admission in All India Quota seats after the second round of counselling for these seats will not be allowed to vacate them under any circumstances. This means that students who already confirm their admission under 15 per cent quota seats will not be allowed to participate in any other counselling process conducted by different states. According to the Bench, this would ensure that very few seats would then need to be reverted to State Quota and that the All India Quota seats would only be filled by students who find a place in the All India Merit list when the NEET results are declared on June 8. Also, the students who confirm their admissions with Deemed Universities following the second round of NEET 2017 Counselling as conducted by the DGHS will not be allowed to participate in any other counselling.

For determining the number of seats left vacant after the completion of counselling, the State Governments will conduct a round of manual counselling. For allotment of the vacant seats after this round, the Government shall forward a merit list of students, which will be ten times the number of vacant seats in all the medical colleges, and whenever a vacancy may arise, the seat will be filled from this list as per the order of merit.

Fee to be paid to state counselling authorities

The court also directed institutions to announce their fee structure in advance and ordered the state counselling authority to collect admission fee during counselling on behalf of institutions.

As per the Court, the admission notifications, whenever they may be passed by the DGHS or the State Government, should necessarily provide the complete fee structure of the Deemed and Private institutes and the consent of students will have to be taken with regard to whether they are willing to pay the mentioned fees while seeking admissions to any of these institutions.

Another directive issued with regard to reducing admission malpractise will now allow candidates who successfully clear the common counselling process held by the State Government to deposit the Demand Draft for their chosen institute’s admission fees with the counselling committee itself. The committee shall then make note of this deposit and only then forward the Demand Draft to the concerned institute. The rationale behind passing this is to ensure that no colleges can refuse admissions to successful candidates on any pretext as a record of admission would already be created through this Demand Draft submission by the Committee.

Since Andhra Pradesh, Telangana and Jammu and Kashmir will not be participating in the common counselling process for central pool of All India Quota seats and will only be conducting counselling for 100% state quota seats, this particular SC order will not be applicable to them.

It should be stated that while the nature of the judgment is interim in nature, it will fully apply for NEET 2017 Counselling and should clear many of the confusions candidates who appeared for the medical entrance exam this year had regarding the forthcoming admissions process. The final verdict will be passed in the next hearing scheduled for September 13, 2017.

NEET 2017 was held on May 7, with over 11 lakh candidates appearing for admissions to around 90,000 MBBS and BDS seats in all medical colleges of India. The Counselling process for NEET is scheduled to be held in June in online mode and will determine final admissions under the 15% All India Quota and 85% State Quota seats in Government, Private and Deemed Medical Institutions across the country.