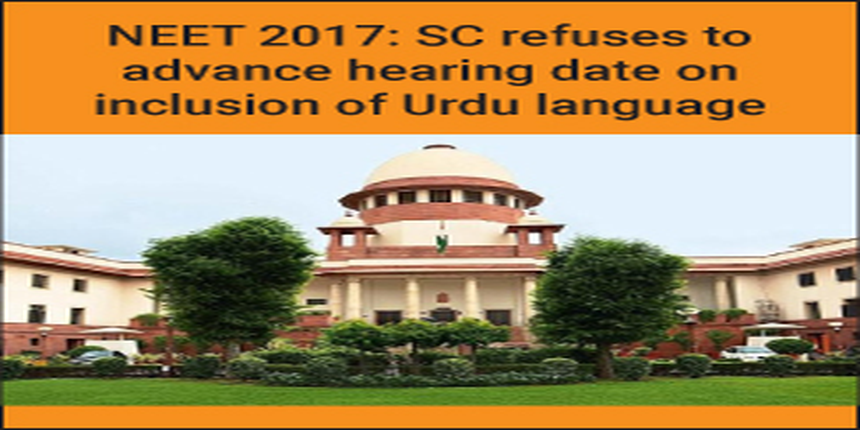 The SIO had sought to advance the hearing date on Writ Petition Number 122/2017 as the NEET 2017 application submissions will close on March 1. The petition argued that Urdu should also be included in the list of languages in which NEET 2017 is held as its exclusion is unfair towards numerous students across the country who complete their schooling in the Urdu medium.

As per the CBSE notification on NEET 2017, the language options for the exam include Hindi, English, Tamil, Telugu, Gujarati, Marathi, Assamese and Bengali. Oriya and Kannada were also introduced as options this year, bringing the total number of languages in which NEET will be held to 10. The SIO‘s contention is that Urdu, being the sixth most spoken language in the country, deserves to be in the list as there will undoubtedly be more aspirants opting for it when compared to Gujarati, Assamese, Oriya and Kannada.

Given that NEET 2017 has been introduced as the single window entrance examination for admissions to all MBBS and BDS seats in medical colleges across the country, not conducting the exam in Urdu language leaves such candidates with no other option to pursue medical education in India, the petition claimed.

Syed Azharuddin, the National Secretary of SIO alleged that the exclusion of Urdu from such an important test like NEET appears to be a case of “selective discrimination of particular language by the ministry even after several representations”. He pointed out that this would be “highly detrimental to students across the country who received their secondary and higher secondary education in Urdu language...(they will be) suddenly confronted with having to either appear in language which they did not undertake their secondary education in or not appear at all”.

NEET 2017 will be held on May 7. The exam has been plagued with numerous controversies ever since the CBSE issued its official notification on January 31, with an earlier criteria on the maximum number of attempts being rolled back after protests and a petition challenging the new age limit criteria already pending in the Supreme Court.

Go to www.medicine.careers360.com for the latest news and updates on NEET!