A three-judge Bench of the Supreme Court declined a petitioner’s request to cancel the results of the NEET 2017 Entrance Exam on Friday, July 14, citing the fact that over six lakh students might be negatively affected. Led by Justice Dipak Misra, the same judge who had earlier overturned the Madras HC’s stay on NEET Results, the Bench ruled in favour of the Central Board of Secondary Education (CBSE), the exam conducting authority, stating that “the admission process must continue...There are six lakh students”. The Bench also denied the petitioners’ requests to pass an interim order which would disturb the schedule in any way. 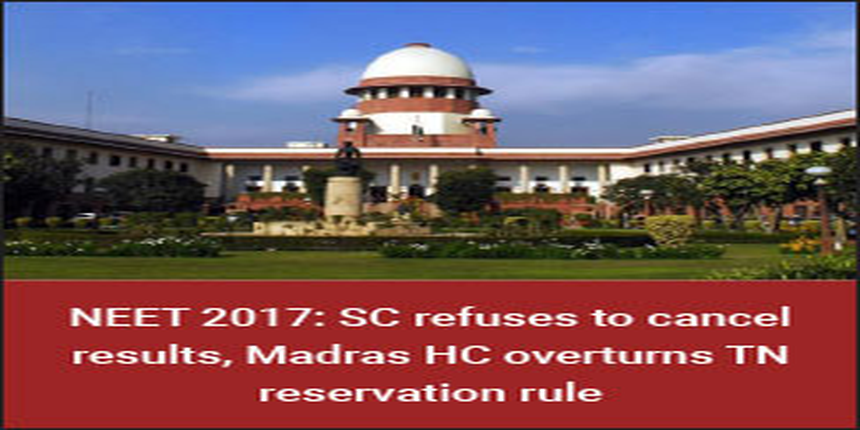 The case for cancelling the National Eligibility cum Entrance Test 2017, or alternatively the results, has been dragging on in various High Courts across the country ever since the exam was conducted on May 7. The reason cited by most petitioners, as also in this case, has been regarding the differences in the difficulty levels of the exams across the ten languages in which it was held, thereby making the entire logic of a single common entrance exam redundant. Due to the various irregularities and the unconvincing responses given by the CBSE, the Madras High Court had even gone to the extent of issuing a stay order on the results, originally scheduled for June 8, until the exam conducting body made a last-ditch attempt to move the apex Court and get the stay order overturned. Justice Misra, who has made it a habit of coming to the CBSE’s rescue time and again, had assured the petitioners that it would look into the complaints and let the declaration of results and admission be subject to its decision. While it may have allowed the results and counselling process of NEET to continue now, the Bench also asked the CBSE to file a response affidavit in the matter within three days. The matter will next be heard on July 31, although at this late stage of the process, it seems highly unlikely that the results will be cancelled or any verdict punishing the CBSE for its ineptness will be issued. While this may seem like good news for a majority of the students who have already suffered enough over the course of the NEET process, a national level exam being subject to so many inefficient  does not bode well for the medical sector in the future.

On July 14, the Madras High Court cancelled a controversial new rule issued by the Tamil Nadu Government which introduced reservations in medical college admissions in the state outside of the NEET protocol. As per the Government Order released by the Tamil Nadu State Health and Family Welfare Department on June 22, 85% of all medical and dental college seats in the state were to be reserved for students who completed their schooling in the State Board, while only 15% seats would be reserved for students from CBSE and other Boards. As per the petition filed against this rule, such a reservation not only disturbed the objective of NEET, which was to introduce a common pathway to medical admissions without any discriminations, but was also violative of the right to equality of the CBSE students as guaranteed by Article 14 of the Constitution. Heeding the arguments of the petitioners, Justice K Ravichandrababu quashed the order, stating that it amounted to “discrimination among equals”. The judge also directed the Tamil Nadu Government to issue a fresh merit list and conduct the counselling process accordingly.

The Tamil Nadu Government, which has been in opposition to adopting NEET right from the beginning intends to appeal the verdict. As per its response, not following this reservation policy will lead to a severe loss for State Board students. Out of the approximately 88,000 students who appeared for NEET in Tamil Nadu, only around 4000 were from the CBSE Board and as per the NEET Result, more than 70% of the seats in the Government medical colleges would go to these students and only 5% of State Board students who cleared NEET will be able to avail admissions here, thereby necessitating some sort of reservation for State Board students so that they do not miss out on seats, the Government argued. Apart from this, the Government is still hopeful of receiving the Presidential assent for two Bills which would allow it to become exempt from the NEET process. It is interesting to note here that in April 2017, it was the Union Health Minister JP Nadda himself who had permitted the State Government to create its own reservation policy as it deemed fit. Clearly, the Court did not see any legal logic behind the same, and it remains to be seen if the Government will be successful in letting the reservation rule stay through its upcoming appeal.