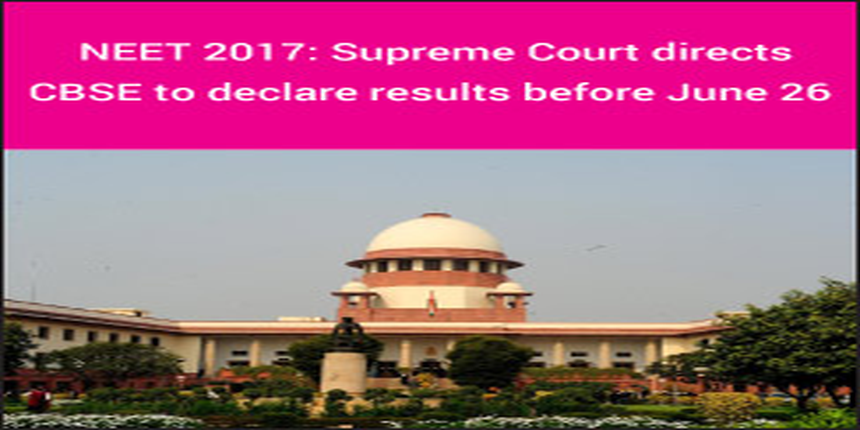 The Supreme Court has allowed the CBSE to proceed with declaration of NEET 2017 Results on or before June 26. The two week margin was given to allow the CBSE to first complete the Answer Key release and verification formalities. The decision, which brings relief to a majority of medical aspirants across the country, sees the apex court overturn the Madras High Court’s stay order which had earlier prevented the CBSE from declaring the NEET results on the scheduled date of June 8. The stay order had been passed on May 24 with regard to the National Eligibility cum Entrance Test (NEET) Question Paper languages controversy, in which several NEET 2017 candidates had complained that the question papers were different in different languages thereby making the whole selection process unfair. Petitioners had filed cases in the Madras, Gujarat and Calcutta High Courts against the Central Board of Secondary Education (CBSE), demanding that the exam be scrapped and held again.

Why the CBSE approached the Supreme Court

In its defence, the CBSE had informed the Courts that only two sets of question papers had been created, one for English and Hindi candidates and the other for vernacular language candidates. With more than 90% out of the approximately 11 lakh candidates appearing for NEET 2017 in English or Hindi, setting a different question paper set for vernacular languages would ensure that the interests of the majority would be safeguarded in case there was a paper leak in any of the other languages. The CBSE also denied the claim that the difficulty levels of these papers were different.

Both the Madurai Bench of the Madras High Court, where the first case was filed on May 19, and the Gujarat High Court, had sided with the petitioning parties and delayed their verdicts to June 12 and June 13 respectively from June 6. This adjournment order had led the Ministry of Health and Family Welfare (MHFW) to request the Madras High Court to overturn the stay order in the interests of students. Then, panicked by whether this delay could upset the entire admissions schedule for the coming academic year, the CBSE was forced to approach the Supreme Court on June 9. The apex Court had agreed to hear the CBSE’s case on a priority basis on June 12, and much to the NEET conducting body’s relief, has now overturned the stay orders issued by the lower courts and allowed for the publication of results.

The SC verdict now allows the CBSE to publish the NEET 2017 Results before June 26 and ensure that the NEET 2017 Counselling schedule is not delayed too much. Firstly however, the Board will have to release the Answer Key and OMR sheets in the next few days and subsequently complete the verification and correction process before proceeding with the results. The CBSE had been expected to release the NEET Answer Key by the end of May but had been unable to do so.

The Supreme Court verdict also directs the various High Courts to not accept any further petitions on NEET 2017. While this may be beneficial to the CBSE, it will undoubtedly leave a sour taste for the various petitioners who were quite confident about the High Courts ruling in their favour. The quick and arbitrary manner in which the Supreme Court has acceded to the CBSE’s request despite the lower courts ruling otherwise will also leave many candidates unhappy.

However, it must be noted that the Supreme Court has still kept a window open for addressing the concerns of candidates. While acknowledging that the High Courts are wrong to delay the results date as it is in direct contravention of a previous Supreme Court order of 2011 which mandated that admission schedules be strictly followed, the Supreme Court Bench said that its current verdict is only limited to overturning the stay on results. As per media reports, the two-member Bench comprising Justices Prafulla C Pant and Deepak Gupta said that there were already other petitions challenging NEET 2017 pending before it. It had also decided to transfer all the various petitions pending in the High Courts to itself as per the CBSE's request. Hence, the petitioners challenging NEET 2017 may yet have a case once the Court examines the petitions given that the NEET counselling and admission process still remains subject to the decision of the Court.

What the Supreme Court verdict on NEET results means

NEET 2017 has seen the CBSE commit multiple blunders for months on end while not bothering to communicate with candidates about various issues, including the delay in publishing Answer Keys or concerns regarding the different difficulty levels of question papers. It was only by approaching the Courts that the petitioners were able to obtain some answers and were also able to know for the first time that the NEET question papers were indeed set differently, contrary to how the usual uniformly conducted national level exams are held.

Whether the petitioning parties had any substance in their allegations regarding different difficulty levels of the NEET Question Paper will now remain unknown. What the SC verdict undoubtedly means is that the CBSE has been let off lightly despite its inefficient handling of one of India’s most important competitive exams. To see the subsequent SC hearings rectify this result-related leniency and make the CBSE answer for its ineptness will be a proposition welcomed by many candidates.

Results unlikely for next ten days

NEET 2017, which will offer admissions to more than 90,000 MBBS and BDS seats in medical colleges across the country, was held on May 7 and has been enveloped in controversies ever since. Right from the forced and indecent frisking of candidates at various exam centres, to the allegations of paper leaks from centres in Bihar and Rajasthan, the All India level entrance exam has led to stress and unnecessary worries for a number of aspirants who wished to pursue a career in medicine.

The Supreme Court verdict will go a long way in calming the nerves of many of the candidates, who were starting to fret over whether the exam may be cancelled altogether and a new one may be held. It remains to be seen what the SC's final verdict will be on the pending NEET petitions but the lifting of stay on results declaration provides them some succour.

Candidates must however note that the Results of NEET 2017 will only be declared after the Answer Key release and correction formalities are completed. This is expected to take a minimum of ten days meaning that the results are most likely to be available between June 20 and June 26 in accordance with the Supreme Court NEET verdict.

how much score sufficient in neet for st category

Is there any reservation for ladies candidate @ NEET for entry into medical course ?

While there is no reservation available for female students appearing for the NEET exam in the 15% All India quota seats, certain state Governments like Maharashtra and Utta- rakhand have a certain percentage of reservation seets aside for NEET qualified female candidates at the 85% state quota level.


I hope that you find this helpful, prepare well :-)

what is the neet cut off marks 2020 for Bangalore medical college for OBC category student pls explain.

Hi, hope you are doing great.
The cutoff marks for 2020 marks is difficult to tell now, as the cutoff varies every year for each category.
However according to the previous year trends , 85% of the seats are reserved for Karnataka via home state quota and 15% for all India.
There are total of 250 seats in this college.

The cutoff according to the previous year for OBC category lies between 466-469 marks.

For for further clarification and details, refer to the link provided below:

WHAT IS THE SAFE MARKS FOR OBC TO GET ADMISSION INTO KALYANI AIIMS THROUGH NEET 2020?

Uday, AIIMS released its result in the form of percentiles and NEET releases its result in the form of score. Now AIIMS MBBS was held for 200 marks and NEET is conducted for 720 marks. Considering all these factors, you should score atleast 600 and above even with OBC reservation. This is because AIIMS seats are filled through All India Quota which means every eligible Candidate can claim stake for a seat in AIIMS. So any score less than 600, might put you in a tight spot.