The two member Supreme Court Bench comprising Justices Kurian Joseph and R. Banumathi adjourned the verdict on the inclusion of Urdu language in NEET 2017 to Monday, April 10 after hearing the case for the fourth time on Friday, March 31. It is expected that the fifth hearing on Writ Petition Number 122/2017 filed by the Students Islamic Organisation of India (SIO) to demand for Urdu inclusion will take place before a different Bench as per the recommendations of Justices Joseph and Banumathi. The previous adjournments on the case had taken place on March 3, March 10 and March 24.

Related Post -
NEET 2019
NEET Eligibility Criteria 2019
NEET Application Form 2019
NEET Admit Card 2019
LATEST UPDATE: NEET Urdu verdict will be declared on Wednesday, April 13, 2017. "List the matter on 13th April, 2017. The parties are at liberty to file the documents," a new three member Bench of Justices Dipak Misra, AM Khanwilkar and MM Shantanagoudar said, while adjourning the verdict for the fifth time on April 10. 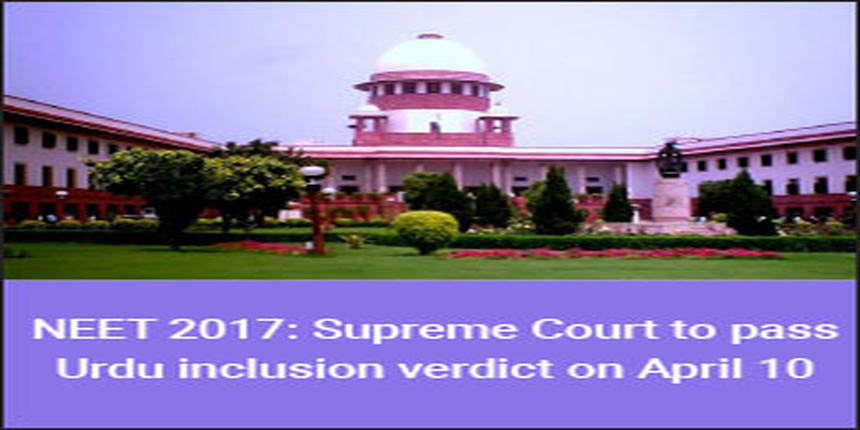 In this latest hearing which took place on March 31, Solicitor General Ranjit Kumar who is arguing the case on behalf of the Centre, the Central Board of Secondary Education (CBSE) and the Medical Council of India (MCI), informed the Court that the SIO had filed an affidavit on Thursday, March 30, accusing the Centre of being communal for excluding Urdu from the NEET 2017. As per the affidavit, the petitioners had alleged that it was “deliberate and intentional on the part of the Health Ministry of the Government of India to not include Urdu as a medium for the NEET exam because of the discriminatory perception of the government functionaries in viewing the language as not a part of cultural heritage and composite culture of India...As the language is associated with Muslim religion...the government functionaries are prejudiced and biased and have deliberately excluded the Urdu language as medium for the NEET exams".

The Solicitor General requested for an extension of three days’ time from the Court to respond to the allegations. An extension of one week was granted by the Court in this regard.

Justices Joseph and Banumathi were also informed about the hearing on the NEET age limit case which was taking place on the same date before the Bench comprising Justices Dipak Misra and AM Khanwilkar in Court No. 2 of the Supreme Court. The latter Bench had removed the age limit of 25 years for NEET 2017 as set by the CBSE and re-opened the application window until Wednesday, April 5. While adjourning the next hearing to April 10, Justices Joseph and Banumathi said it would be appropriate if the same Bench were to hear the NEET Urdu case as well. “Learned counsel appearing for the petitioners submit that a related matter [W.P.(C) No.99/2017] is pending consideration before Court No.2. Therefore, post these matters, on 10.04.2017, before Court No.2, subject to orders from Hon'ble the Chief Justice of India,” they declared.

It is now expected that Justices Dipak Misra and AM Khanwilkar will hear the case on April 10. With only a month remaining for NEET 2017, scheduled to be held on May 7, the chances of the SIO getting Urdu approved as a language for NEET 2017 appear slim. However, it may yet transpire that an order may be passed to include it from NEET 2018 onwards.

As per the CBSE notification released on January 31, the same in which the controversial upper age and maximum attempts limit were introduced for NEET 2017, Hindi and English along with the regional languages of Tamil, Telugu, Gujarati, Marathi, Assamese, Bengali, Oriya and Kannada were finalised as the official mediums of examination. The SIO had filed its writ petition against the Centre, the Medical Council of India (MCI) and the Central Board of Secondary Education (CBSE) on the basis that the exclusion of Urdu from this list was a violation of Articles 14 and 21 of the Constitution and including only 8 regional languages apart from Hindi and English was extremely unfair on numerous students completing their school education in the Urdu language. According to the SIO, Urdu, despite being the sixth most spoken language in India as per the 2011 Census, had been excluded at the expense of Gujarati, Kannada, Oriya and Assamese, which were ranked as the seventh, eighth, tenth and twelfth most spoken languages in the country respectively. “Urdu has been arbitrarily and unreasonably left out as a medium (for NEET 2017)...Leaving out Urdu...not only deprives a large number of students studying science in Urdu Medium of equal opportunity, but is also a violation of right to life, being denied the opportunity to pursue a career in Health Sciences and shape their lives as per their choice and interest,” the petition had read.

With the NEET application process closing on March 1, the SIO had earlier filed a plea of urgency motion on February 24 seeking for an advancement on the date of the Urdu inclusion hearing. The reason behind seeking advancement was that once the NEET registrations would close, then students who wished to apply for NEET 2017 in Urdu would be left disadvantaged. The urgency plea had been rejected by a three member Bench comprising Chief Justice of India, JS Khehar, and Justices DY Chandrachud and SK Kaul, who listed the petition for hearing on March 3.

Justices Kurian Mathew and R Banumathi heard the case on March 3 and issued notices to the Centre, the Cental Board of Secondary Education (CBSE) which is the exam conducting body, the Medical Council of India (MCI) and the Dental Council of India (DCI) to explain their reasoning as to why Urdu couldn’t be included in the list of languages in which NEET 2017 would be held. The Bench asked the Centre and other bodies to submit their response by March 10.

On March 10, the Centre informed the Supreme Court that it was open to including Urdu as one of the languages in which NEET was held, but it could only introduce it from next year onwards and not for NEET 2017. Justices Joseph and Banumathi then granted permission to the Centre to submit its full response in the matter by March 22 and adjourned the hearing to March 24.

After the apex court adjourned the case for the third time on March 24, the Counsel for the SIO complained that the matter’s continuous delay was primarily because the Centre had yet to inform them in advance about the responses it filed with the Court before each hearing.

With the latest affidavit being filed by the SIO accusing the Centre of being communal, it remains to be seen what response is filed by the Solicitor General on behalf of the Government. It will also be interesting to see whether Justices Mishra and Khanwilkar view the matter as sympathetically as they did the NEET age limit case and whether similar relief will be granted to petitioning students here as well.

Read the latest news and updates on NEET 2017 at www.medicine.careers360.com!