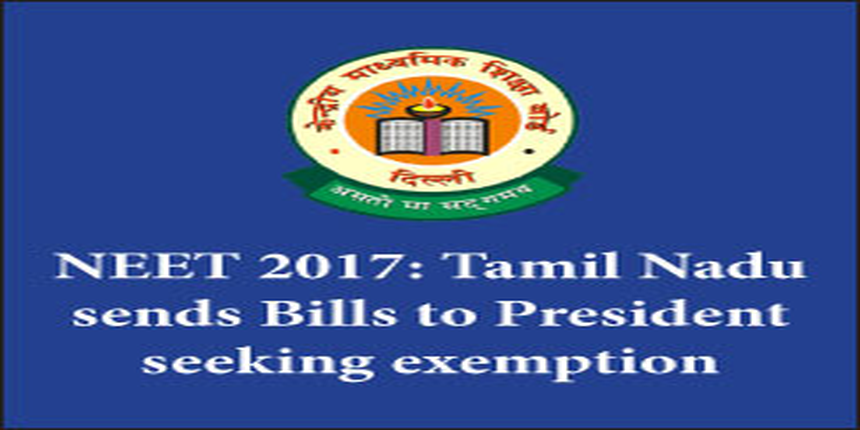 Hours after winning the vote of confidence in the Tamil Nadu assembly, new chief minister Edapapadi K. Palaniswami announced that two bills previously passed by the state legislative assembly to exempt Tamil Nadu from participating in NEET and NEET PG have been sent to President Pranav Mukherjee for approval. These bills had already received the approval of Governor C. Vidyasagar Rao on Friday, February 17, 2017.

In one of his first official announcements to the media since becoming chief minister, Palaniswami addressed the topic of NEET and was quoted saying, “We have now sent the bills to the President for approval. It was signed by the Governor yesterday.”

Latest :  Crack NEET 2020 with NEET Knockout Program( AI-Based Coaching), If you Do Not Qualify- Get 100% MONEY BACK. Know More

Given that NEET is a part of professional education, one of the items on the Concurrent List, the bills will require initial vetting from the Union Ministries of Law and Health and Family Welfare before they reach the President for approval. Once it receives the President’s assent, the bills are expected to come into force immediately.

Crack NEET 2020 with NEET Knockout Program, If you Do Not Qualify- Get 100% MONEY BACK

The bills, which received support from all the political parties in the assembly, seek to continue admitting students to the medical colleges of Tamil Nadu on the basis of their Class 12 examination marks for the UG courses and the existing qualifying exam marks for the PG courses.

The rationale behind seeking exemption from NEET, as explained by Minister Vijayabaskar, was that the majority of students appearing for the exam belong to rural areas and economically weak families, resulting in a struggle to access quality medical coaching. Given that there already exists a rigorous examination of merit in the form of the Class 12 board examinations, it would be unfair to expect these students to prepare for a separate uniform entrance examination which would determine their future in one stroke. It would also be better for the PG students if the existing state entrance exam model was continued.

“The state government has taken a policy decision to continue the present procedure of admission to MBBS and BDS courses on the basis of marks obtained in the Class 12 higher secondary examination,” the minister was quoted as saying.

Last year in April, the Supreme Court has passed a directive stating that NEET would be the single entrance examination for admissions to 100% MBBS and BDS seats in the country. Many states, including Tamil Nadu had protested against the NEET decision, calling it an “unfair move for students from state boards”. An ordinance was subsequently passed giving a one year exemption to all states, through which they could either choose to conduct their own entrance examination or accept NEET scores for admissions to 85% of State quota seats for the academic year 2016-17. Tamil Nadu had opted to continue with their previous year’s selection process of accepting 10+2 scores for admissions to medical and dental programmes.

NEET 2020 cutoff DU – Aspirants can check the NEET Cutoff 2020 Delhi by the fourth week of August...

Marks in NEET to get seat in AIMS

You haven't mentioned your Category. Neverthless, AIIMS will condcut admission to its 1500 seats through All India Counselling there by leaving no State Quota chances. All this while, AIIMS had its own entrance and admission process. It released its results in the form of percentages. The exam was for 200 marks including English along with conventional Physics, Chemistry and Biology. Now NEET has only Physics, Chemistry and Biology and the exam is for 720 marks. And NTA releases NEET scores in the form of marks. These are the basic differences between AIIMS and NEET. Now putting aside all these differences we shall try to convert the percentages to scores to help you with an ideal score to get into AIIMS. In 2019, the cut offs for various Categories for AIIMS has been as follows:

When this is roughly converted for 720 marks, it might be more or less this way:

Now this is 2019 data and cut offs change every year depending on various factors such as no.of Candidates appearing for the exam, no.of Candidates qualified, top NEET score and difficulty of the exam. In 2019, 701 was the highest score and the ranker chose MAMC. Now with AIIMS and JIPMER also joining NEET counselling, the competition is only going to get tougher. You can benefit from our MBBS Companion which can help you predict Colleges for your score and clear your questions regarding counselling: https://www.careers360.com/mbbs-companion

HOW many marks should score in NEET to get seat in AIMS.

Ayush, it has to be NSO. NEET is the entrance examination for admission to Medical, Dental, Ayush and Veterinary Courses across India. Now NSO is a competitive exam conducted for cultivating scientific reasoning and logical ability. This needs an indepth knowledge of science. But once someone prepares for NSO, appearing for NEET becomes easier because the preparation is extensive. You get a deep understanding of the basics and so at later stages, preparing for NEET becomes easier.

i am in bsc first year at ignou through dustance mode.. but i am not going to give exam of bsc this year . so what qualification code i should fill in neet form

Geeta, your qualification code will be 02. Though you are in your First year B.Sc, your highest relevant qualification is 12th. And Code 02 says: The Higher/Senior Secondary Examination or the Indian School Certificate Examination which is equivalent to 10+2 Higher/Senior Secondary Examination after a period of 12 years study, the last two years of such study comprising of Physics, Chemistry, Biology/Bio-technology (which shall include practical tests in these subjects) and Mathematics or any other elective subject with English at a level not less than the core course for English as prescribed by the National Council of Educational Research and Training after introduction of the 10+2+3 educational structure as recommended by the National Committee on Education.

can I reupload my scanned documents without nta s email or msg in neet 2020 application form as reuploading option is there provided . and what if email doesnt comes ? pls tell pls help ..

Mrunal, you cannot change/edit uploaded images unless notified by NTA. The Information Bulletin says: "Any correction pertaining to the photograph and signature of the candidate will be intimated through e-mail/SMS and the same will be available in the candidate’s login account". So if you do not receive any notification from NTA consider the uploaded images to be falling in line with NTA'S guidelines.