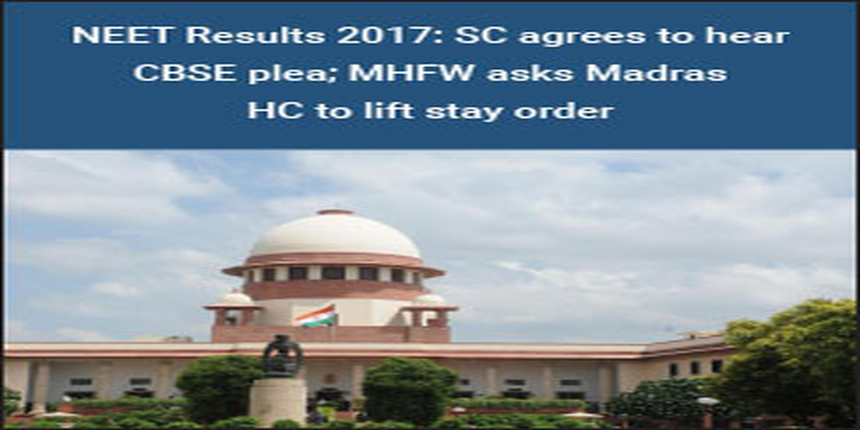 The Central Board of Secondary Education (CBSE) has approached the Supreme Court to overrule the stay passed by the Madras High Court on the declaration of NEET 2017 Results. The apex court has agreed to hear the matter on a priority basis on Monday, June 12. The exam conducting body of NEET has also requested the Supreme Court to transfer to itself the cases against NEET 2017 currently pending in the Madras and Gujarat High Courts.

The Supreme Court approach comes one day after the Ministry for Health and Family Welfare (MHFW) had filed a counter-affidavit with the Madras High Court requesting it to lift the stay order on the declaration of NEET 2017 Results previously scheduled for June 8. Passed on May 24, the stay order forbids the CBSE from declaring the results of the All India medical entrance until June 12 or later, jeopardizing the entire admissions schedule for the forthcoming academic year.

Results unlikely for next two weeks

On June 6, the CBSE had appeared before both the Madras and Gujarat High Courts to file its response against petitions demanding for NEET 2017 to be canceled because of the controversial variance in difficulty levels depending on the languages of the NEET 2017 paper as alleged by several candidates. The Madurai Bench of the Madras High Court had asked for the NEET paper to be produced in all ten languages to verify the allegations and adjourned the verdict for June 12. The Gujarat High Court had also followed suit and set the next date of hearing on June 13. Both the Courts turned down the CBSE’s plea for vacating the stay order, which has now led the body to approach the Supreme Court. However, even if the Supreme Court intervenes and passes a verdict in favour of the CBSE at this juncture, it seems highly unlikely that the NEET Results will be declared at any point in the next two weeks, and possibly only after June 20, given that the entire Answer Key release and correction process is pending.

Earlier, the Centre’s request to the Madras High Court came at the end of a tumultuous few weeks for the CBSE in which the exam conducting body of the National Eligibility cum Entrance Test (NEET) 2017 found itself embroiled in legal battles in the Madras and Gujarat High Courts with further courts cases possibly to come. While updates from the Calcutta High Court hearing on June 8 regarding cancellation of the exam were yet to be received, other media sources have confirmed that the Ministry for Health and Family Welfare filed a counter affidavit with the Madurai Bench of the Madras High Court on the same date, requesting it to vacate the stay order on result declaration. With the prospects of more than 11 lakh candidates hanging in the balance due to the results delay, it can be said that the Centre was almost forced to intercede on the CBSE’s behalf.

The Calcutta High Court petition was filed by a group of four candidates on June 6. Apart from putting forth the same complaints as that of petitioners from Madras and Gujarat in terms of difficulty variance for the Bengali paper, the Calcutta petitioners also brought forward other interesting allegations which may yet change the course of the NEET verdicts. Their petition demands that the NEET 2017 paper be scrapped as it was ridden with technical and software flaws even at the time of application form filling in online mode. Apart from this, they contend that many OBC candidates were unable to apply under their particular quota because of mismatch between State and Centre OBC lists. Another legal technicality they have pointed out is regarding the failure of the MCI to issue an official gazette notification on NEET 2017, thereby rendering the exam invalid. It must be noted that NEET has received a cool reception in the state ever since its inception, with most students bodies and the Government remaining in favour of conducting a state level medical entrance as before. The Calcutta High Court was presumed to defer to the Madras High Court’s verdict like the Gujarat High Court did, but now with the Supreme Court deciding to get involved, it remains to be seen what the final verdict will be in this long legal saga and how it will affect the NEET admission process.

Earlier on June 8, another important development saw the Madurai Bench of the Madras High Court transferring the petitions it is currently hearing with regard to the NEET Question Paper controversy to the main High Court seat in Chennai. This was apparently been done following a request from the principal seat to continue proceedings in the capital city from the next hearing onwards, scheduled for June 12. It is unclear though whether that hearing will now take place or hold any validity, as the CBSE has successfully managed to get the Supreme Court to hear its case on the same date.

Check out medicine.careers360.com for the latest news and updates on NEET!