After over a month of hearings and five previous adjournments, the final verdict on Writ Petition 122/2017 was declared by the Supreme Court in favour of the petitioners on Thursday, April 13. In doing so, the apex court gave the green signal to include Urdu as one of the languages in which the National Eligibility cum Entrance Test (NEET) will be held. However, as was expected since the initial hearing on the case took place, the addition of Urdu will only be applicable from the 2018-19 session onwards. A three member Bench led by Justice Dipak Misra and comprising Justices AM Khanwilkar and MM Shantanagoudar, directed the Centre and the CBSE to accede to the request of the Students Islamic Organization of India (SIO), the petitioning body, to add Urdu to the list of the existing ten languages in which NEET is held. 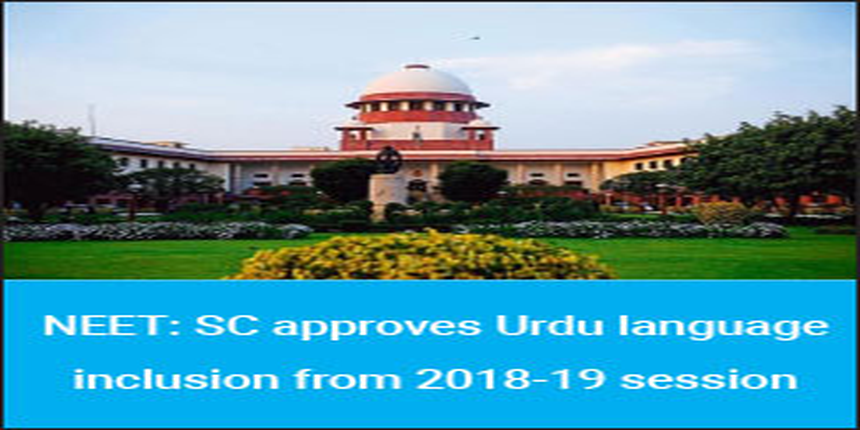 As reported by Careers360 on April 6, the chances of the SIO getting Urdu approved as a language for NEET 2017 were always slim, what with less than a month remaining for the exam scheduled to be held on May 7. However, it is likely to be a decision which appeases the petitioners, who had earlier even filed an affidavit accusing the Government of being communal by excluding Urdu from the list of NEET languages. As per the affidavit which was filed on March 30, the SIO claimed that it “deliberate and intentional on the part of the Health Ministry of the Government of India to not include Urdu as a medium for the NEET exam because of the discriminatory perception of the government functionaries in viewing the language as not a part of cultural heritage and composite culture of India...As the language is associated with Muslim religion...the government functionaries are prejudiced and biased and have deliberately excluded the Urdu language as medium for the NEET exams". These allegations had been refuted by Solicitor General Ranjit Kumar, appearing on behalf of the Centre and the CBSE, who from the first hearing onwards had maintained the stance that Urdu would be a welcome addition in NEET but only from next year onwards.

It is interesting to note that this decision, which will bring relief to thousands of aspirants who can appear for NEET in Urdu from next year, was one of two NEET related verdicts passed in favour of petitioning students by Justices Misra and Khanwilkar in the past two weeks. The same judges were earlier involved in removing the controversial upper age limit criteria for NEET 2017. The verdict was passed by them on March 31, thereby allowing students above the age of 25 to apply for NEET 2017. This was also only their second hearing in the NEET Urdu case, the first coming on April 10, after the original Bench of Justices Kurian Joseph and R Banumathi, having adjourned the verdict on four previous occasions, transferred the case to them on the same day the NEET age limit verdict was declared.

The counsel for the SIO had earlier requested the Bench to issue a direction for holding NEET 2017 in Urdu language or to direct the CBSE to hold a supplementary examination. As per media sources, in response to the SIO requesting for Urdu to be included from NEET 2017 itself, the Bench replied that it was impossible because of paucity of time. As per the Bench, “...the whole problem is that (holding NEET in Urdu) this year it is not possibleâ€¦There are lots of difficulties. Please try to understand that we can’t ask the Centre to do miracles. The examination is on 7 May and today is 13 April. Lots of processes are involved in this...”. The counsel appearing for the CBSE and the MCI also disagreed with the reasoning behind holding a supplementary exam, arguing that "if the examination is held by way of a supplementary examination, it has the potentiality to dilute the NEET examination".

Read below the entire timeline of the case.

Stay updated with the latest news on NEET at www.medicine.careers360.com!