In an offer that probably comes across as too little too late for lakhs of medical aspirant in the country, the Union Human Resource Development Minister Prakash Javadekar clarified that the Government intends to set uniform question papers for NEET from 2018 onwards, unlike what was the case this year. As per media reports, Javadekar, speaking at a symposium in Kolkata on Saturday, July 22, said that the questions papers in vernacular languages will be a translation of the ones set in English and Hindi. The National Eligibility cum Entrance Test (NEET), introduced from this year onwards as a common medical entrance examination for over 90,000 MBBS and BDS seats in Government, Private and Deemed institutions in the country, has been plagued with various controversies ever since it was conducted on May 7, 2017. 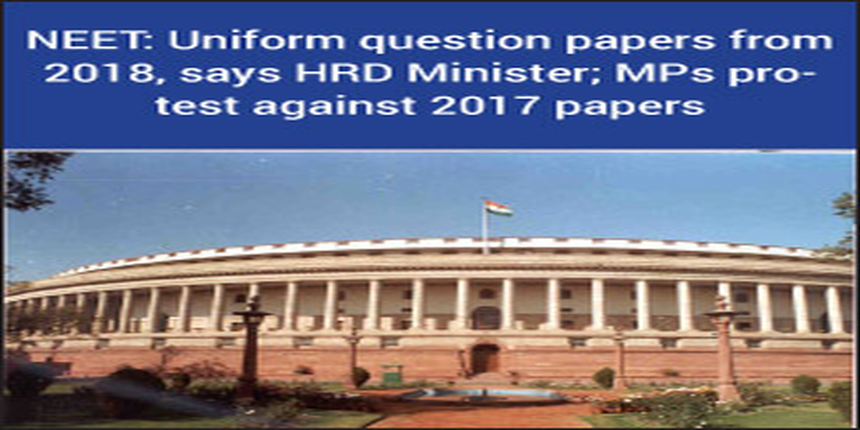 The most vociferous protests have come against the differences in question papers depending on the language, which many candidates said diluted the objective of having a uniform examination. The Central Board of Secondary Education (CBSE), the exam conducting body of NEET 2017, has faced immense flak from various states for conducting the exam in this manner, without bothering to inform candidates about the same. Infact, the first acknowledgement by the CBSE that it had set one question paper in Hindi and English, and a separate one for the remaining 8 vernacular languages came during its defense in a case filed against it in the Madras High Court. Stating that the reason behind doing so was to ensure that only a minority of candidates would be affected if a leak took place in any of the vernacular language papers, the CBSE said that the fears of candidates were baseless and both sets of papers had been set by an expert committee with the exact same difficulty level. Unimpressed, the Madras HC had passed an order which stayed the NEET Results scheduled for June 7 until the CBSE could come up with a more convincing explanation. Finally, it took the intervention of the Supreme Court to overturn the order and ensure that the NEET Results could be declared on July 23.

While the CBSE got away with its inexplainable decision to hold a single window national level entrance exam for more than 11 lakh candidates with separate question papers, the protests continued to intensify. With neither the Board nor the Ministry bothering to issue an official explanation, various state Governments, including the West Bengal and Tamil Nadu Governments, have continued to raise issue.

On Monday, July 24, Rajya Sabha MPs from West Bengal and Tamil Nadu raised issue with the way NEET 2017 was conducted in different languages with different difficulty levels, much to the detriment of the candidates who had written the paper in Bengali or Tamil. Infact, West Bengal Education Minister Partha Chatterjee had been among the first to raise his objection to NEET, soon after reports started coming in that the Bengali paper was more difficult compared to the English paper.

The Rajya Sabha MP from Trinamool Congress, Derek O’ Brien, followed Chatterjee’s cue in slating NEET by saying that the NEET 2017 Results had reflected how the exam had led to ‘disastrous consequences’ for all those students who had attempted the paper in Bengali. He was joined by MPs from the All India Anna Dravida Munnetra Kazhagam (AIADMK), who apart from contesting the differences between the Tamil Nadu paper and the English paper, also asserted their Government’s long-standing demand to scrap NEET or exempt Tamil Nadu from the same until the syllabus could be made uniform and not, as they claimed, be in favour of CBSE students.

In response, the Union Health Minister, JP Nadda, assured the MPs that the Government was looking into the matter and would try and come up with a favorable resolution soon. Given that this is the very same reply the Minister had given two months ago when the matter had been first brought to his notice, and that the NEET 2017 Counselling process has been almost concluded, it seems unlikely that students will receive any redressal for their grievances this year. The best that can be expected is that the Government, and the CBSE in particular, have learnt their lessons and will be able to hold NEET 2018 in a more systematic and non-controversial manner.

Visit medicine.careers360.com for the latest news and updates on NEET!