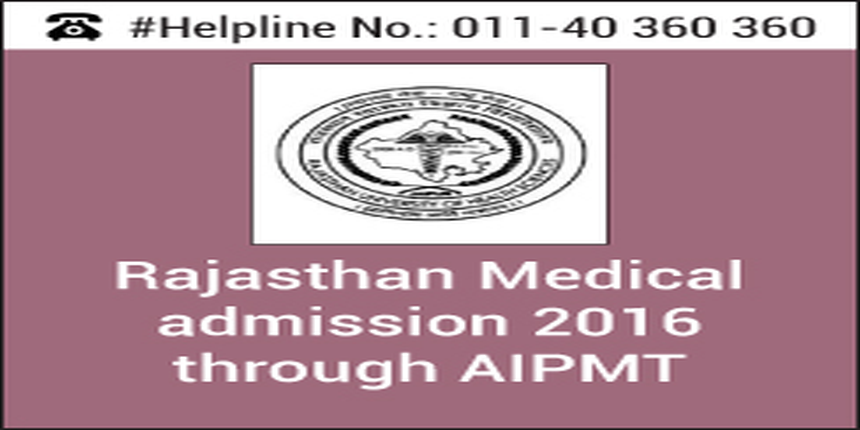 Government of Rajasthan has decided to accept AIPMT 2016 score for admission to MBBS and BDS seats in different Government/Private medical and dental colleges of the state. On behalf of the state government, RUHS College of Dental Sciences & Hospital, Jaipur will conduct online centralized counselling for allotment of approximately 1400 MBBS and BDS seats in respective medical and dental colleges of Rajasthan.

AIPMT 2016 is a national level entrance exam scheduled to be conducted on May 1 by Central Board of Secondary Education (CBSE) for undergraduate medical and dental seats under 15% All India Quota except institutions in Andhra Pradesh, Telangana and Jammu & Kashmir.

The CBSE will release Rajasthan Medical 2016 admission merit list based on marks scored in AIPMT 2016 after declaration of result and allotment of state quota seats will be done as per candidates rank and preferences.

Admissions to undergraduate medical or dental programmes will be considered only after the fulfilment of eligibility criteria as asked admission authority. As per the Rajasthan Medical 2016 admission eligibility, candidates must be of 17 years on or before December 31, 2016 and must bonafide resident of the state. Also candidates must have qualified the entrance exam with requisite percentage as per their category.

Rajasthan Medical Admission through AIPMT 2016 will be done on the basis of online centralized counselling. Rajasthan Medical admission 2016 merit list will be released in the month of June and counselling procedure will begin conducted various rounds beginning from July, 2016.

Candidates can check the last year cut off score for Rajasthan Medical Admission through AIPMT from the table given below: