Clearing the confusion over MBBS and BDS admissions into deemed universities in Maharashtra, the Supreme Court has asked the state government to conduct a centralised counselling for all unfilled medical seats in the state. The court order, however, has come with a caveat that the admission already conducted by the deemed universities will remain valid and the centralised counselling will be done for remaining vacant seats only.

While passing the judgement, the two-judge bench of Justice A.K. Sikri and Justice L. Nageswar, said that admissions already made in the deemed universities would not be disturbed. “In so far as second or third counselling is concerned, that shall be a joint exercise which means it shall be done by the Committee of State Government which shall include one representative each from these universities,” ordered the bench on September 28, 2016. 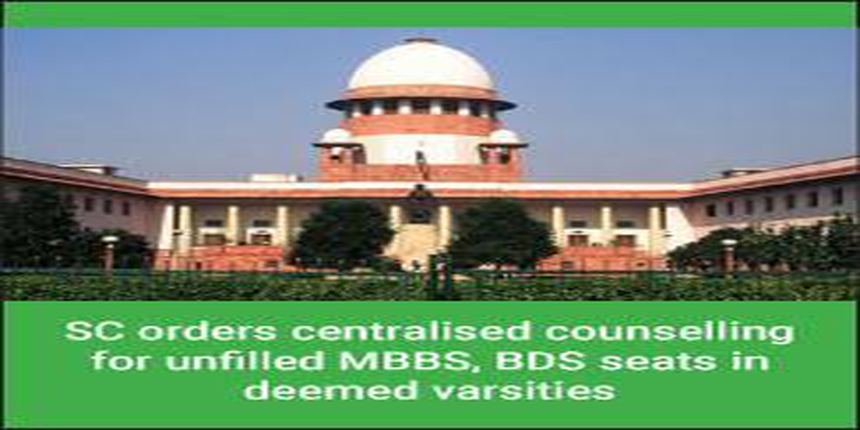 The court clarified that  admissions in all deemed universities will be centralised and not university-wise and the students will be granted admission by taking into account  the combined list of those who got themselves registered with the state government  as well as deemed universities.

The apex court also extended the time limit for completion of admission process till October 7 from September 30 and directed the state government to ensure all medical seats are filled within the stipulated time.

Earlier, the deemed universities had argued that state government is violating their fundamental right to administer their own institution and hold individual counselling for students.

On September 15, 2016, the University Grants Commission (UGC) had, however, issued a public notice clarifying that deemed universities will be a part of common counselling for MBBS and BDS admissions through NEET merit list.

In another case, the apex court refused to interfere in any admissions already made by the medical colleges in Kerala.

Stay tuned to www.medicine.careers360.com for more information on NEET Counselling