In a major relief to MBBS selects in Maharishi Markandeshwar Medical College (MMMC), the Shimla High Court has directed the college to admit students, whom the medical college had earlier denied admissions on grounds of unresolved fee issues between the college and state government. The High Court in its order on September 20, 2016, asked the college to admit the 150 students, selected as per the list issued by state counselling committee, in their MBBS programme.

A two-judge HC bench of Chief Justice Mansoor Ahmed Mir and Justice Tarlok Singh Chauhan passed the order on a petition filed by one of the selected students. “We deem it proper to direct the respondent medical college to admit students, as per the list issued by the counselling committee, headed by the Director, Medical education and Research, Himachal Pradesh,” reads the HC order. 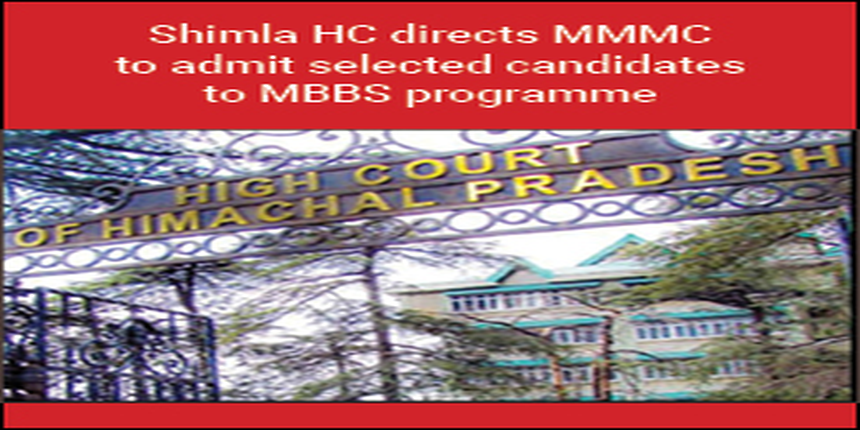 The court has further directed the respondent, medical college- MMMC, to file a reply by or before September 26, and listed the matter for final hearing on October 3, 2016.

Previously, in the matter related to revising the fee for the current academic session, the private medical college (MMMC) had approached the state government. However, the state government had turned down the request saying that no changes can be made in the fee structure after completing the counselling rounds, and publishing the prospectus. Regardless to the State governments order, the said medical college denied admissions to the selected candidates on the grounds of unresolved fee issues.

Additionally, the HC has also directed the selected students to pay the additional fee in case the college revises the same for the current academic session.

Earlier on September 19, 2016, Union Health Minister JP Nadda sought intervention of Himachal Pradesh Chief Minister, Virbhadra Singh to resolve the impasse of denial of admission in MBBS course by a private medical college to the students selected through centralised counselling.

JP Nadda had said that if the college has any issue with the government over fee structure, it is the responsibility of the state to fix it through a fee committee.