Just before Medical Counselling Committee (MCC) was to hand over vacant seats from 15% All India Quota pool to respective states, Supreme Court put a stay on the transfer of such seats till further order.

“The vacant 15% All India Quota under graduate (MBBS/BDS) seats shall not be transferred to States till further order,” said an MCC notification citing the SC order of September 20. 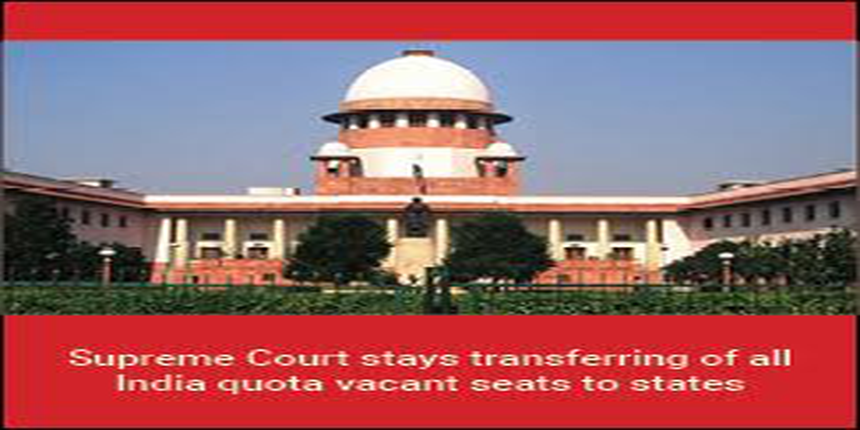 The Supreme Court has, meanwhile, advised state authorities not to fill up 15% All India Quota vacant seats of round 2 till further order. “The vacant 15% All India Quota undergraduate (MBBS/ BDS) seats shall not be transferred to States till further order,” reads the notification released by the MCC.  The Supreme Court stayed the scheduled transfer of seats after hearing a writ petition filed on the issue.

The NEET counselling process for 15 per cent all India Quota seat had ended on September 12. The counselling was conducted in 2 rounds.

After the second round of NEET counselling concluded on September 12, the Medical Counselling Committee (MCC) was supposed to submit the vacant seats to states after 05:00 pm on September 20, 2016. Surprisingly, the apex court’s stay contradicts its earlier order where it directed MCC to conduct central counselling through NEET scores in two rounds only.

Earlier on September 12, the Kerala High Court had directed MCC to conduct as many counselling rounds for central counselling as required to fill up all seats under ‘All India Quota’ (15%) across the country so that vacant seats are not transferred to the respective states. The Kerala HC said that due to transferring of vacant seats process, eligible candidates who have qualified for NEET Counselling lose out to state students.

Like, the Supreme Court, the Kerala High Court had also directed MCC to complete the NEET Counselling process by September 30, 2016 so that academic session can start as per the schedule notified by SC earlier.

Stay tuned to www.medicine.careers360.com for more information on NEET Counselling