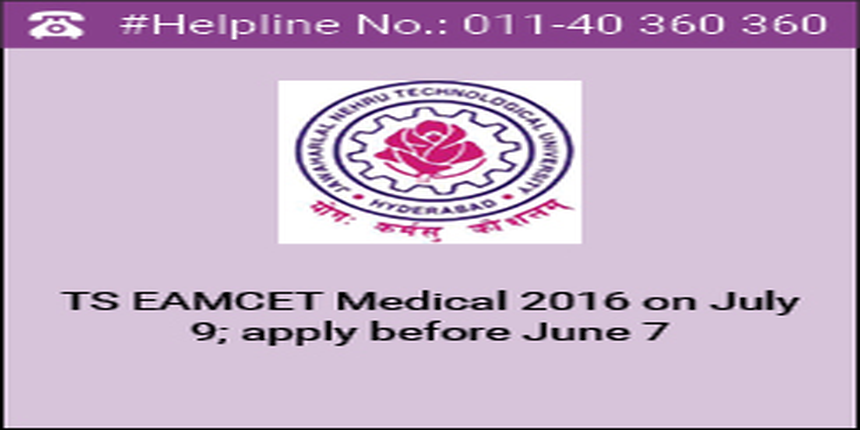 TS EAMCET Medical 2016 will be conducted on July 9 for admissions to approximately 2,650 MBBS and BDS seats in Telangana for the academic year 2016-17.  According to a notice issued by its conducting authority, Jawaharlal Nehru Technological University (JNTU), Hyderabad, application forms for the exam will be available from June 1, 2016. TS EAMCET Medical 2016 application window is opening for the second time this year as earlier the applications had to be withdrawn and the exam postponed due to the SC ruling on NEET.

With the Central Government passing the NEET ordinance exempting state level medical colleges from mandatorily accepting NEET from this year, JNTU has issued a notification announcing the fresh dates of the exam.

Candidates can refer the table of TS EAMCET Medical 2016 important dates below and mark their calendars accordingly:

The result of TS EAMCET Medical 2016 will be declared, tentatively, in the month of July, 2016. The qualifying percentage of marks for TS EAMCET Medical is 25% of the maximum marks considered for ranking. However, for candidates belonging to Scheduled Caste and Scheduled Tribe, no minimum qualifying mark is prescribed.

Stay tuned to www.medicine.careers360.com for more news and updations on TS EAMCET Medical 2016