Agreeing with the decision of the Madhya Pradesh Professional Examination Board (MPPEB) to cancel the admissions of 634 candidates to MBBS seats between 2008 and 2012 through the controversial Vyapam test, the Supreme Court passed its judgement on Monday, February 13, stating that not cancelling the admissions would be tantamount to “..allowing a thief to retain stolen property”. 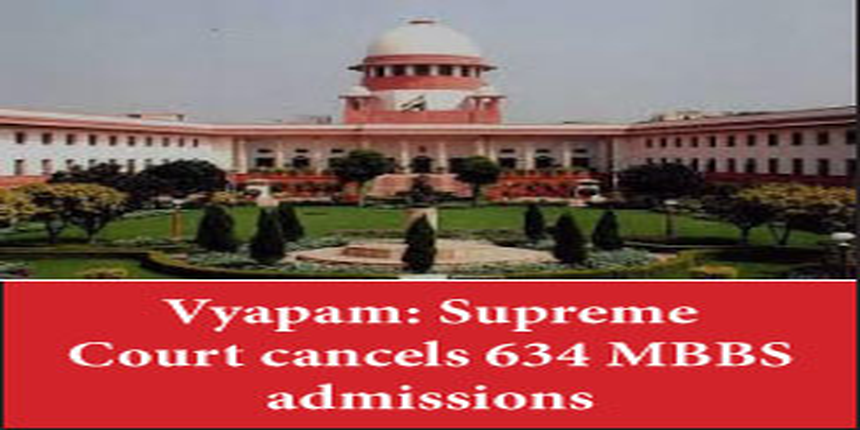 In a 87 page judgment produced by the three member Bench of the Court, led by the Chief Justice of India J. S. Khehar, the admissions of these students to the coveted MBBS seats in the medical colleges of Madhya Pradesh was deemed to be the "outcome of a well orchestrated strategy of deceit and deception”. Out of the 634 students whose admissions to the MBBS course during the 2008-12 period had been cancelled, only 268 students had actually taken admissions to the MBBS course while the appellants who were pursuing the case numbered 139.

Through this judgment, the Court upheld the verdict passed in 2014 by the Madhya Pradesh High Court, which had cancelled the results of entrance examinations held between 2008-13 through the MPPEB, better known by its Hindi name as the Madhya Pradesh Vyavsayik Pariksha Mandal (Vyapam), because of the exposure of a large-scale scam in the admission process.

Considered as one of India’s biggest admission and recruitment scandals, the Vyapam scam first came to light in 2013 when the Madhya Pradesh Government set up a Special Task Force to look into allegations stating that a network of exam riggers and political operatives had been meddling with the admission process of the official examinations run by the state’s Professional Examination Board for the last five years and more. Lakhs of Rupees had been paid by thousands of candidates to secure their admissions to the state-run medical colleges and coveted state government jobs, which could only be applied for through the 13 different examinations conducted by Vyapam. While fraudulent admission rackets have been exposed earlier in India, Vyapam became an explosive controversy given its sheer scale, with top government officials, authorities of medical colleges and even the state education minister being implicated for fixing the results of the entrance exams in exchange for money.

The Pre-Medical Test, on which the Supreme Court just released its verdict, had been ridden with allegations of corruption and rigging since the early 2000s, but it was only in 2009 that a large scale network was unearthed behind the racket when the MP Police arrested around 20 ‘impersonators’ who had come to write the exam on behalf of the registered candidates.

Noting how the 139 appellants challenging this case had used similar techniques to confirm their admissions through the MBBS exams held between 2008 and 2012 onwards, and how the entire admission process should be considered as “based on established fraud”, the Supreme Court stated, “The appellants were helped in answering the questions in the Pre-Medical Test, by meritorious candidates. The manipulation by which the appellants obtained admission involved, not only a breach in the computer system, whereby roll numbers were allotted to the appellants, to effectuate their plans. It also involved the procurement of meritorious candidates/persons, who would assist them, in answering the questions in the Pre-Medical Test.”

The appellants had earlier argued that they should be let into medical practice because many had already completed their degrees and given the resources invested on them and the paucity of qualified doctors in India, cancelling their admissions would mean “the institutions would lose, the State would lose and the appellants would also lose”. Disagreeing with the appellants’ contention that Article 142 of the Constitution could be invoked to let them keep their degrees after they are allowed to serve for five years in rural areas or for free so that the knowledge accrued doesn’t go to waste and is used to serve humanity, the Court said that such a move would “...amount to espousing the cause of ‘the unfair’.

Describing the entire scheme of events “as a scam ... a racket of sorts”, the Court also declared that allowing these admissions to stand would “compromise the integrity of the academic community”.

The Vyapam case had commanded national attention in 2015 after more than 20 individuals related to the scam suffered ‘unnatural’ deaths since investigations began. This had led to the Supreme Court issuing an order to transfer the case from Madhya Pradesh police to the Central Bureau of Investigation.

Stay tuned to www.medicine.careers360.com for more latest updates and news on medical exams

NEET Dress Code 2021 for Male and Female by NTA